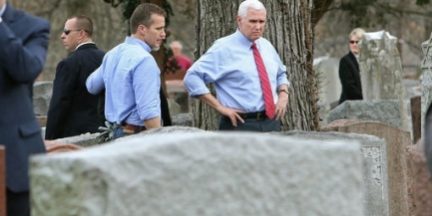 With the presidential race heating up, a number of progressive Jewish commentators have portrayed the Republicans’ vice presidential candidate, Indiana Gov. Mike Pence, as a conservative extremist opposed to Jewish beliefs and values. As officers of the only statewide, grassroots Jewish and Israel advocacy organization in Indiana — who also have had the privilege of working closely with Pence and other Indiana legislators of both political parties to pass important pro-Jewish, pro-Israel legislation — we dispute this inaccurate portrayal.

In fact, there is strong reason to believe that such opposition to Pence is much less a reflection of his positions than an indication of how far many Jewish Americans have strayed over recent years from core Jewish beliefs.

Take for example Pence’s demonstrable attachment to the Jewish state of Israel, which he has called “America’s most cherished ally.” In sharp contrast to many of his critics, Pence is a vocal supporter of Israel’s right to defend itself against sworn enemies like Iran, Hezbollah and Hamas. While some of Pence’s opponents support the Boycott, Divestment and Sanctions movement, which opposes the existence of a Jewish state in any form, he recently signed into Indiana law what Israel’s ambassador to the U.S., Ron Dermer, called “the toughest anti-BDS legislation in the nation.”

Douglas Bloomfield in a recent anti-Pence piece argued that “for most Jewish voters, support for Israel is not a determinative issue but is often around fourth of fifth on their priority list.” Bloomfield is correct when he observes that for far too many American Jews, the security of Israel is of little importance. Pence’s support for Israel doesn’t resonate because much of American Jewry has chosen to distance itself from the Jewish state.

Another example involves social issues related to marriage and family. As it turns out, Pence’s positions on these issues are largely in accord with traditional Jewish beliefs.

Kodesh, the Hebrew word for holy, implies separating or making something distinct. For practicing Jews this concept applies to dietary practices, clothing, family and marital relations, and keeping the Sabbath. Making distinctions also requires making value judgments. Pence’s religious perspective, which shapes his positions on marriage and family, is also dependent on making distinctions. This type of thinking is disdained by liberal Jews, who have redefined Judaism as rejecting distinctions within the Jewish tradition and in their relations to non-Jews.

Another example involves religious liberty, a concept that has allowed American Jews historically unprecedented space and freedom to pursue their lives as Jews. Pence’s statesmanship has been grounded in the American constitutional tradition of individual rights and limited government, which are required for religious liberty to flourish.

Pence’s opponents, however, are opposed to these classic liberal ideals and support the use of government power to compel people to abandon their religious convictions in the public square. For traditional Jews this in effect means being forced to adhere to whatever happens to be the prevailing social norms. This type of behavior is akin to classical anti-Semitism, which demanded that Jews abandon their discriminating religious beliefs.

This issue arose with Indiana’s Religious Freedom Restoration Act, or RFRA, which Pence signed into law in 2015. Though Indiana’s RFRA is one of 21 state RFRA laws, Democrats have built an entire campaign against Pence by claiming that his RFRA was designed to deny LGBT civil liberties. At the 2016 Democratic convention, Nevada State Sen. Pat Spearman claimed that Pence “used religion as a weapon to discriminate.” U.S. Sen. Elizabeth Warren of Massachusetts argued that Trump “picked a vice president famous for trying to make it legal to openly discriminate against gays and lesbians.” Hillary Clinton’s campaign characterized Pence as the “most extreme VP pick in a generation,” claiming that “Pence personally spearheaded an anti-LGBT law that legalized discrimination against the LGBT community.”

These claims have been echoed by some Jews. Rabbi Dennis Sasso, whose Indianapolis congregation is affiliated with the Conservative and Reconstructionist movements, asserted that Pence’s failure as governor is most evident in his support of RFRA, since it “allows a private business the right to restrict or limit services to LGBTQ persons on religious grounds.” The Indianapolis Jewish Community Relations Council testified before the state legislature that if RFRA were adopted, “people could use their religion to justify almost any discriminatory action they choose to take in their public lives.” In his article, Bloomfield wrote that Indiana’s RFRA law permits “Indiana businesses (to) refuse to serve gays, lesbians and others by citing religious objections.”

In reality RFRA is nothing like what its critics claim. Indiana University law professor David Orentlicher observed that it was “designed to protect religious practice from discrimination by government.” Orentlicher, a Democrat, is himself a former Indiana state representative and currently a candidate for Congress. Law professor Douglas Laycock, who helped write the federal RFRA law, notes that religious freedom laws are mostly used for a wide range of reasons including “churches feeding the homeless” and “Muslim women wearing scarves or veils.”

RFRA neither intends to nor enables the wholesale denial of LGBT rights and does nothing to permit or promote discrimination against LGBT individuals as individuals in the marketplace. In fact, its critics are using it as a smokescreen to conceal their own wholesale rejection of fundamental constitutional and religious principles, including religious liberty. The real, underlying issue that prompted such fury against Pence is that the RFRA may, depending on how the courts rule, permit individuals and businesses to adhere to their religious beliefs on how to define marriage. Supporters of RFRA believe in the classic liberal idea that government should not compel citizens to abandon the free exercise of their religious beliefs in the public square.

It is ironic that an evangelical Christian politician who has demonstrated tenacious support for the Jewish state of Israel, who advocates aggressively for religious liberty, and who supports the practice of traditional Jewish values has been so demonized by individuals and groups claiming to represent Judaism. As American Jewry drifts further from its traditional religious moorings, we should expect to see more of such rhetoric.