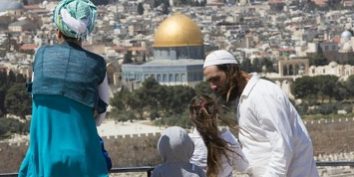 In another manifestation of Biblical precepts interacting with modern life, a private foundation representing the descendants of King David recently launched a lawsuit presenting a legal claim to ownership of the Temple Mount.

While their claim is legally sound and verifiable, it faces significant political hurdles. One of the suit’s beneficiaries, who claims descent from the Davidic Dynasty, is ready for the legal battle but cautiously pragmatic.

This story has simple beginnings. In 2004, Dr. Boruch Fishman, then a recent immigrant to Israel from America, went to tour the tomb of Samuel the prophet north of Jerusalem, which led to a chance meeting with Israel Aurbach, the owner of a nearby farm. Inspired by the Biblical roots of the setting, they began to discuss the link between the House of David and the Temple Mount. They noted that King David purchased the site, originally for a simple altar.