Pat Mercer Hutchen’s art work gets to its Hungarian Home

When painting her famed The Auschwitz Album Revisited collection of unique art works, our dear friend, courageous and passionate Pat Mercer Hutchens was dreaming that one day her works will be shown in Budapest, Hungary.

Pat was working on her the one of the kind collection during several years, all days through, non-stop, despite becoming seriously ill at the certain stage of her last project.

She saw that very hard work which was strength, nerve and emotions consuming, as her mission. She became to feel those people snapped on the photos taken by the sadistic Nazi officer as an amusement for himself and alike, as someone whom she got to know personally. During the long hours in her studio in Virginia, crying and reflecting, she has become related to each and every of them, the real people from the Hungarian village of Bilek who had been photographed in Auschwitz hours, days or months before they were exterminated by the keen Nazi photographer and his devilish colleagues.

Original photograph that has become the prototype for the art work, from the Auschwitz Album. Courtesy (C) Yad Vashem.

After two important and very successful exhibitions of her Auschwitz Album Revisited in Poland and Ukraine, Pat was very eager to hear on a friend’s suggestion to have the exhibition of the series in Hungary. Nothing would dis-heart her: no evidently widely spread new wave of anti-Semitism in Hungary at the moment; no maze of officialdom; no uncertainties in planning and execution the project. The reason for that was very simple: she wanted the people from her paintings to return home, back from Auschwitz.

Only after I personally came to Budapest recently and visited several places central to the Jewish history there, I understood our wise, great friend. When showing to the people in Budapest just one of the Pat’s work from the collection, I have noted so very special reaction that it is truly difficult to relate it by words. It was warmest, deepest, overwhelming gratitude with almost no words. What words are needed when Hungarian people, especially those who are researching and working on the history of the Holocaust, do know the original Auschwitz Album, its story and the people featured there, by heart?.. It was most valuable appreciation of 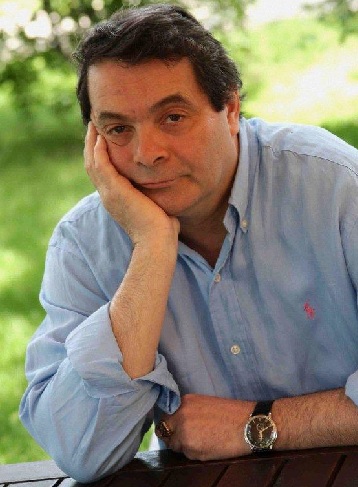 We brought the one of the Pat’s works, Deprivation of Disabled, the archival print signed by our friend who did not sign too many of her works out of her impeccable modesty, to the very special gathering organised in Budapest in May 2016.
The Art of Impossible, International Raoul Wallenberg Conference & Roundtable was hosted by the Budapest Holocaust Memorial Centre and gathered outstanding historians, experts and public figures from around the world who were joined by the wonderful members of the Raoul Wallenberg family, Marie and Patrick Dupuy, Louise von Dardel and Bengt Lagergren.

Among the audience that had been working hard for two long days were: legendary Karel Schwarzenberg, the mentor of Vaclav Havel, many times minister for Foreign Affairs of the Czech Republic, currently the Chairman of the Foreign affairs Committee of the Czech Parliament; great Irwin Cotler, famous international lawyer and human rights activist, former Minister of Justice of Canada, and a veteran Canadian MP, the one of the leading figures in the international fight against anti-Semitism today; the author of a mile-stone’ biography of Raoul Wallenberg Ingrid Carlsberg; Lovice Maria Ullein-Revicsky, the daughter of

the high-ranking Hungarian diplomat and opponent of Nazism Antal Ullein-Revicsky; and many other leading public figures and historians world-wide.

The Rogatchi Foundation had been the sponsor and supporter of that very special forum, and Inna Rogatchi participated in the Price for Activitism panel there. The conference took place at the Budapest Holocaust Memorial Centre. The part of the Centre is recently restored Pava Synagogue. Built in 1920s, it has become the last Synagogue in Budapest until this day.

It was that conference and that institution where Inna Rogatchi has handed the art work of Pat to the leadership of the Budapest Holocaust Memorial Centre in the front of the distinguished international gathering.

In the Special Diploma on Art Donation, it is written that The Rogatchi Foundation has donated this art work of Pat Mercer Hutchens to the well-known historical institution “in recognition of the Centre and its people’s deep and tireless contribution into the living memory of the victims of the Holocaust”, and also as a sign of The Rogatchi Foundation’s gratitude for the key-role which the Budapest Holocaust Memorial Centre has played in the organising and hosting the International Raoul Wallenberg Conference in May 2016.

Entrusting the art work and Special Diploma to the leadership of the Budapest Holocaust Centre, Inna has emphasised that ‘there simply cannot be more appropriate place in the world for the Pat’s works because of a simple reason: the original Auschwitz Album is about the people from Hungary, in particularly, the community of Bilke.

The original Auschwitz Album has a central place in the Centre’s permanent exposition. But until this day, you did not have a single work from another, world-renowned collection of the very special art works created by our dearest friend, Pat Mercer Hutchens, who, along with her heroic and legendary husband Brig. General James M. Jim Hutchens and their family, are known as the staunch supporters of Jewish people and the State of Israel.

Having two large and very successful exhibitions of this her outstanding collection in Poland, near Auschwitz and in Ukraine, Pat was dreaming on having it in Hungary, namely in Budapest. Today, we can say that at least the one work from her unique collection has made it here, to Budapest.

In the original Auschwitz Album which belongs to Yad Vashem, we did find the original photo, the prototype of the Pat’s work Deprivation of Disabled. This original photo is featured in our Special Diploma on the Art Donation, so the photo which has been taken by the Nazi sadistic officer, and the artistic re-reading of it by the passionate Pat Mercer Hutchens 70 years later, can be seen and compared.

Maybe, the Centre will be interested to exhibit those two images next one to the other, so many visitors of your very serious permanent exhibition will be able to seeing the origins of the evil, and our stand against it, does not matter how much time has gone. These crimes have no statue of limitation. And our memory, too”, – said Inna Rogatchi while handing the donation to the director of the Centre Dr Zoltan Toth.

All present at the Price for Activism panel of the Raoul Wallenberg International Conference, including the Wallenberg family, and many distinguished guests, gave their enthusiastic applauds on the occasion. The entire leadership of the Budapest Holocaust Centre, including its Chairman professor Szabocs Szita, has expressed their profound gratitude to Inna Rogatchi and The Rogatchi Foundation.

The screen of the Raoul Wallenberg International Roundtable.

It will be only natural if more works from the Pat’s The Auschwitz Album Revisited collection would be shown in that so suitable place for them, the Budapest Holocaust Memorial Centre. Let’s hope that our all’ joint work on the project will make it possible, and the Pat’s heartfelt works on the Hungarian people on the edge of their lives abrupt by the Nazis so viciously, will be travelling back to those people’s homeland. We really owe it to them and to the rare human being, the artist Pat Mercer Hutchens who did place all those Hungarian victims of the Shoah into her bottomless heart.

The lines on the walls symbolize the Jewish life-lines, they are diminishing and broken as the exhibition unfolds. Attribution: Inna Rogatchi (C). Life-Lines. Budapest Holocaust Memorial Centre. 2016.