‘Europe’s Jews are worried – and for a good reason’ 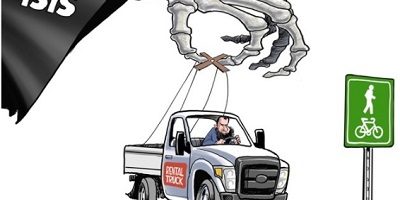 The Weimer Republic’s flawed experiment in democracy in the 1920s, has become today’s paradigm for the failure of state and society. By the end of Weimar, the government seemed to have lost control — vigilantes from the political extremes claimed they were keeping the streets safe while beating up vulnerable minorities, above all Jews. So it is shocking when citizens in Germany and France — and elsewhere in Europe — increasingly cite Weimar when discussing their society today.

The European Union now does sometimes resemble a replay of Weimar’s combination of institutional perfection with violent and nationalist forces aimed at tearing down the “system.” Though Germany’s 1919 constitution, written in the city of Weimar, was widely viewed as a model document, throughout the 1920s the constitutional dream seemed ever more disconnected from public life.

The political leaders of France and Germany today deplore anti-Semitism and make striking gestures of solidarity with their country’s Jewish population, but the gestures seem helpless. The number of anti-Semitic incidents, as tracked by such bodies as the European Union Agency for Fundamental Rights, is on the rise. Many Jews in many European countries, but above all in France, are contemplating leaving because they believe their homelands have become so unsafe. The political establishment tries to reassure them with the argument that the parallels with 1933 are really too much of a stretch.

To a degree, the reassuring voices are correct. Many of the most prominent recent European incidents are not the outcome of an old-style anti-Semitism in France or Germany. Indeed, the right-wing French National Front under Marine Le Pen has distanced itself from its older positions — as articulated by her father, Jean-Marie Le Pen, who was convicted of Holocaust denial after calling the wartime Nazi occupation of France “not particularly inhuman.” In fact, today’s National Front sometimes refers to Israel as an ally against Islamism. In the new grass-roots anti-immigration movement in eastern Germany, PEGIDA, the explicit target is “Islamicization,” and Israeli as well as Russian flags were prominently displayed in some of its early rallies.

At the beginning, Weimar’s political institutions were skillfully designed to be as representative as possible. Most Germans viewed their society as remarkably tolerant. German Jews in the 1920s often emphasized that they lived in a more inclusive society than France’s, which was still riven by the legacy of the Dreyfus case, when the army and the church prosecuted an innocent Jewish officer for espionage, or than the United States’, where prime real estate and universities were often not open to Jews.

This misconception about German stability lasted a long time, indeed extending for a time after Adolf Hitler became chancellor on Jan. 30, 1933. Right up until April 1933, when the regime launched a “boycott” of Jews, many German Jews refused to accept that anti-Semitism could be politically serious.

Today, the most obviously violent threats clearly come from Islamic terrorism, from groups affiliated to or imitating Islamic State. That is the story of the attack on the Jewish supermarket in Paris, where four were killed last January, which came in the wake of the attack on the satirical magazine Charlie Hebdo. It is also cited to explain the attack on the Jewish Museum in Brussels, or of some of the many synagogue attacks. The Agency for Fundamental Rights even tries to register incidents separately and attributes some of them to “foreign ideology,” meaning radical or jihadist Islamism.

Yet the jihadist incidents are — in numerical terms — a minority. There is, however, an intellectual contagion, in which native far-right radicals often use anti-Israel and anti-American slogans that proliferate in the Middle East as part of their anti-Semitic arsenal. In France and Britain the “quenelle,” a version of the Hitler salute, popularized by the French comedian Dieudonné M’Bala M’Bala has become popular with the racist right.

In addition, arguments about anti-Semitism have spilled over into the discussion of the refugee crisis confronting Europe. For some, the large-scale inflow of more than a million refugees in one year, from the Middle East and North Africa, is bound to lead to an inflow of actual terrorists, who can easily conceal themselves in the crowds of migrants. But it is also being blamed for a possible influx of terrorist ideas. Anti-Semitic texts such as Mein Kampf or the Protocols of the Elders of Zion are widely available in the countries from which migrants are moving; and anti-Semitism, usually linked to anti-Israelism, is a natural ingredient of the social and cultural milieu that is moving into Europe.

The classic liberal answer to the new threat is that the state has an absolute and unconditional duty to protect all its citizens. That is the position that Germany’s Chancellor Angela Merkel and French Prime Minister Manuel Valls insistently, and rightly, defend.

But many people will also ask whether the state can really offer so much security. It is increasingly obvious that the police are overstretched. That was true even before the flood of refugees. A long trial currently under way in Munich, Germany, has highlighted the way in which the intelligence service that was dedicated to “protection of the constitution” (Verfassungsschutz) against right-wing terrorists was for a long time blind to the threat. Instead, it had undermined its efforts by engaging members of far-right-wing groups as informers. Dealing with the new kinds of threat demands a far greater security presence, as well as new methods of surveillance.

As more and more incidents demonstrate police ineffectiveness, new groups will mobilize for self-protection. The incidents on New Year’s Eve in Cologne and in other German cities, in which criminal groups, composed largely of migrants from North Africa, stole from and sexually harassed women, have led to the formation of citizens’ patrols. In many cases, the personnel of these patrols come from the far right and its sympathizers.

That brings the story back to Weimar. In the last years of the republic, German streets were controlled not by the police but by paramilitary groups, of the left (the communist Red Front Fighters’ League) as well as the right (the Nazi Stormtroopers). Then, even the parties of the center believed that they, too, needed their own defense organizations, and built up their own leagues. When the government tried to ban the Nazi Stormtroopers, the army objected on the grounds that it believed it could not effectively fight all the different leagues simultaneously.

One lesson of Weimar is that it is very dangerous for the state to give up its legal monopoly of violence. One key feature that makes modern life civilized is precisely that we don’t take the law into our own hands. But the existence of threats, real or imagined, creates a great deal of pressure for “self-defense.”

There is a second, related lesson. Violent and ostensibly antagonistic ideologies may be quite capable of fusing. Sometimes in Weimar, the far right and far left just fought each other; on other occasions, they joined together in attacking the “system.” Today in Europe, there are the same curious blends, sometimes of jihadism with traditional anti-Semitism, or anti-jihadism and anti-immigrant populism with traditional anti-Semitism.

The fusing of dangerous ideologies makes members of small groups vulnerable. They are additionally vulnerable when the state promises protection that it cannot actually deliver. That is why Europe’s Jews are so worried.

Harold James is the Claude and Lore Kelly Professor in European Studies, and professor of history and international affairs at the Woodrow Wilson School of Public and International Affairs at Princeton University. He is the author of A German Identity, Making the European Monetary Union, and The Deutsche Bank and the Nazi Economic War Against the Jews, among other books.