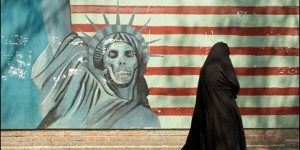 It’s 1979. Iran’s monarchy lay somewhere between impotency and total collapse. The Islamic Revolution rolls full steam ahead as one of the largest protest movements in history. Millions take to the streets in anti-Shah demonstrations throughout Iran. On January 17, the Shah and the rest of the Pahlavi dynasty flee the country. In short order, exiled Revolutionary leader Ayatollah Khomeini returns to Iran from Paris; millions of cheering well-wishers greet him at the airport. In a matter of ten short days the Ayatollah and his Revolutionaries overwhelm the last military forces loyal to the monarchy, ushering in the Islamic Republic.

Hundreds of American and Israeli citizens in Iran evacuate during the ensuing chaos. Key Embassy officials are an exception. Their governments fear that if they completely jump ship, their countries will never be allowed back. The remaining personnel at the American and Israeli Embassies hunker down and wait for Khomeini’s next move.

On February 10, Revolutionaries holding a political demonstration call for an end to the Israeli presence in Iran. Thousands of political demonstrators, chanting “Death to Israel, Long live Arafat,” march to the nearby Israeli Embassy. Before the mob climbs over the walls and surrounds the building, the Israelis inside set fire to the last documents remaining. Most of the classified files were mailed back to Israel months before. Personnel narrowly escape out the back gate, as the mob storms the embassy. Looting is rampant. The Israeli flag is torched. But, they are too late to take hostages or find intelligence.

Later that day, Yasser Arafat, visiting Iran as the first foreign “head of state,” gives a speech from the Israeli Embassy’s balcony, declaring it the new headquarters for the Palestinian Liberation Organization. “Under the Ayatollah’s leadership,” Arafat announces, “we will free Palestine!” The deposed Israeli diplomats hide in Tehran apartments for a week until they secretly board a plane with eight hundred evacuating Americans.

Fast forward nine months. The plight of the American Embassy is a story much more familiar. Diplomats remain in Tehran on the principle that the U.S. should not evacuate on its own accord. The State Department assures employees that everything is “perfectly safe.” On November 4, 1979, a group of Iranian students and militants seize the compound. Calling themselves the “Muslim student followers of the Imam,” they take fifty-three American staffers hostage, parading them in front of news cameras bound and blindfolded.

The marauding Iranian students find a treasure trove of classified documents which were thought to be destroyed through a one-way shredder. They form teams to gather all the shreds and spend the next two years reassembling them. They publish sixty-five volumes of classified documents from what Khomeini referred to as the “American spy den.”

Consider for a moment the very different fates of both embassies.

On that February day, when the Israelis heard boots marching, they ran for their lives, incinerated their secrets, and lived to tell the tale. Nine months later, when buses of Iranian demonstrators arrived at the American embassy, they met zero resistance. The Marine security guards were armed but refused to use force. According to the testimony of William J. Daughtry—an American hostage—one security guard announced he was going to “reason” with the mob. Shortly after, Daughtry spotted him blindfolded with the rest.

In the throes of Khomeini’s Iran, the Americans took little caution in improving the vulnerable security situation at the American compound. This is especially surprising considering that Revolutionaries had taken over the Embassy once before on February 14, 1979. Embassy personnel were held hostage for several hours in what became know as the St. Valentine’s Day Open House. That event should have foreshadowed worse things to come.

Even as the mob took over every Embassy office, the Americans requested Iranian police or military to intervene for their protection. The Americans assumed up to the bitter end that Iran would abide by international law that says embassies are sovereign space and diplomats are immune from arrest. Khomeini never got that memo.

The Islamic Revolution took most of the world by surprise, including Western intelligence agencies. Israel’s Ambassador to Iran, Uri Lubrani, was one of the few who predicted the fall of the Shah. In a letter to Prime Minister Begin in June 1978, he warned that the Shah’s regime would collapse within two to three years. In the fall of 1978, the Central Intelligence Agency informed President Carter there was no chance of the monarchy collapsing. The CIA assessed that Iran was “not in a revolutionary or even a pre-revolutionary situation.” According to predictions of the 1978 National Intelligence Estimate, the Shah would rule for another decade. Such optimistic estimates proved to b a risky way of deciding business when it came to Iran.

America hoped the Revolutionary shakeup was an internal Iranian issue; the State Department thought if they kept a low profile then the anti-American rhetoric would blow over. The Israelis in the Embassy ran and hid because they took the enemy at their word. When crowds chanted “death to the Jews,” they assumed they meant exactly that. As a result, the Israelis had a close shave but they came out unscratched. The Americans, for their part, got a swollen black eye and a 444-day hostage crisis.

The Iran of 2015 is on a path to nuclear armament. The Western world for years was unable to stop or even stall these aspirations, so they caved, assuming that Iran would ultimately act in its own rational interest. Israel, on the contrary, is taking Iran at its word and understands what’s at stake. The U.S. is assuming benevolence, taking no heed to Iran’s continued, almost daily, apocalyptic threats and diplomatic obstinance. The writing, however, is on the wall, literally. The former American Embassy, now housing Revolutionary Guards, is covered in Anti-American graffiti. A skeletal Statue of Liberty is spray painted along one wall with a scrawled message that translates “We will make America face a severe defeat.” No one can say the Iranians didn’t warn us.