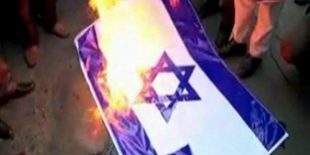 Any humanitarian, religious or not, would call racism in any form a loathsome social evil. One can only imagine the terror and horror of pogroms in the past toward Jews just as the modern day pogroms of Boko Haran against Christians and ISIS against everyone is a terrible and horrible evil today.

Real human rights abuses abound. Anyone with Internet exposure is not immune to horrifying scenes of extreme human physical torture, beheadings and deprivation. The phrase, “Mans inhumanity toward man,” is a bromide of many years use because history and mankind do not change, only the times and situations change.

As it has been throughout all history, Israel is again the object of racism. The derogatory term used to be, and really still is, “the Jews.” Today the word “Israel” is used as a pejorative as well. The more common descriptive disparaging term vis-à-vis Israel and the Jews is to use the phrase “anti–Semitism.” Truth be told, the word “Semitic” refers not only to Jews but also to Arabs.

Bias or prejudice against any people group or nation constitutes racism. Israeli Justice Minister Ayelet Shaked is absolutely correct in her assessment of the boycott, divestment and sanctions movement (BDS) against Israel as representing anti-Semitism because it hurts Jews and Arabs alike but few people talk about this aspect of BDS. This is racism at its very core and it is antithetical to the leftist mantra of political correctness.

The current modern usage of the term “politically correct” originates from the tolerance point of view. As it should be, “tolerance” in the Western world is an important issue within the framework of human rights and freedoms, whether we wholly agree or not, so long as it hurts no one else. Tolerance trumps racism at any degree.

So how can the very people who promote tolerance be so racist and anti-Semitic as to rally against Israel, burn the flag, foment destruction and call for the eradication of Jews? Perhaps one explanation is that many are acting out of “emotionalism” based on attitudes which have been bred into them by their culture and society. “Emotionalism” without truth and facts is disturbing and very dangerous often leading to violence and murder – the ultimate in human criminality. A case in point is the recent report of the Dutch man who offered money on Facebook to anyone who would kill his “devilish Jewish neighbor.”

Negative fervency was one of the tactics used by Hitler to incite mass hysteria against the Jewish people. It can be stopped simply by knowing and accepting the truth and refusing to embrace false leaders who promote an agenda of hatred against any people or nation. An agenda, like any doctrine, can be counter productive to the truth of a situation when it is veiled in deception and distortions. Checking the facts from all sides is an educated way of uncovering the truth. It’s a protocol that all who embrace freedom and democracy must practice. The dictum, “Perception is truth,” is not sound practice. It is for this reason investigators investigate and probe the facts in order to ascertain the truth.

In the Christian world the word “sheeple” has been coined. It is used to describe people who act like sheep meaning those who blindly “follow the leader” never bothering to investigate or check the facts for themselves. If “sheeple” would only take the time to do a little digging, there would be far less animosity against the tiny nation of Israel from her acerbic Arab neighbors and there would be far greater support for Israel from mainline Christian denominations. Israel wants peace the way “peace” is defined by Western definition and understanding. The Palestinians do not want this kind of peace – they want only the destruction of Israel and the eradication of “the Jews.” How racist is that?

All pro-BDS people should take time ponder the facts and “facts” is the operative word here. If they do so with an open mind willing to admit to being wrong, they will soon be promoting products made in Israel because they are made with Arab and Jewish hands. Instead of boycotting they would be investing in a country whose GDP continues to soar and from whose marvelous inventions the world receives great benefit. If mainline Christians would read the Bible in its plain language and not let anyone with a racist or anti-Semitic agenda teach a contrary doctrine, the world will be a better place. Our Israeli brothers and sisters deserve nothing less.