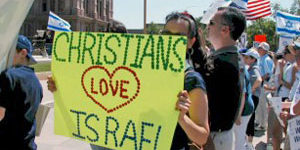 American evangelicals are among Israel’s staunchest supporters, a new survey by LifeWay Research shows. Most believe God has plans for the people of Israel, and many American preachers tell their congregants that Christians have an obligation to support the Jewish state.

The Nashville-based research group conducted its study on American attitudes towards Israel and the Bible using two separate surveys. The first examined a representative population of 1,000 Americans, while the second addressed 1,000 senior pastors of Protestant churches.

“No piece of literature has had more impact on American culture than the Bible,” said Scott McConnell, vice president of LifeWay Research. “No country is more intertwined with the ancient biblical narrative than Israel, and evangelical Americans see a contemporary connection with the nation.”

The study revealed evangelicals see a close connection between God and Israel.

The general American public, however, is more skeptical. Fewer than half (only 46 percent) see the formation of the modern Jewish state as the fulfillment of a prophecy, while about a third (36 percent) disagree. 17 percent remain uncertain.

When it comes to the status of the Jewish nation as God’s chosen people as mentioned in the Bible, again, 46 percent of Americans agree, with 44 percent disagreeing with that designation. 10 percent are not sure.

Surprisingly, the survey also revealed only 42 percent of Americans support the existence of the modern State of Israel, with numbers rising as the respondent’s level of education rose. Of Israel’s supporters, 16 percent cited the Bible as their reason for backing the state. Other explanations for supporting Israel include its status as America’s only friend in the Middle East (13 percent), as a post-Holocaust refuge for Jews (11 percent) or because it is the world’s only Jewish state (15 percent).

McConnell noted, “It is surprising that evangelicals, who have such a fascination with Israel’s biblical connections, are no more likely to have an opinion about Israel’s statehood than other Americans.”

Among those surveyed, Israel’s most ardent supporters were senior Protestant pastors, with 80 percent agreeing “Christians should support Israel.” However, despite their general support for the Jewish state, 41 percent expressed that “It is hard to defend Israel’s military tactics.” 50 percent disagreed, while 9 percent were unsure.