Without Ten Commandments, our own Judeo-Christian civilization is dead 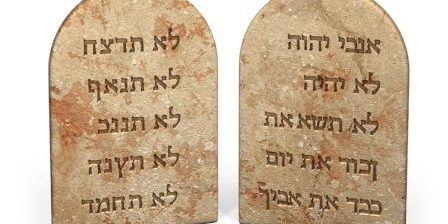 Yes, without Ten Commandments, our civilization is dead, and our Judeo-Christian spiritual leaders (rabbis, priests) are doing very little to slow down the process of dying.

Here is the latest example.

“The Ten Commandments monument must be removed from the grounds of the state Capitol, the Oklahoma Supreme Court ruled. Justices ruled 7-2 the monument must go because the state constitution prohibits the use of public property to directly or indirectly benefit a ‘church denomination or system of religion’.”

That is what all enemies of our civilization have done in the past and are doing right now. They are those who have the burning desire to dethrone the Supreme Power called God (being real, surreal or even imaginary) who guides all of us – through the Ten Commandments – in creating the better world for all.

Why do they want to dethrone God? To become themselves supreme powers above us and force us to work along the lines of their own designs of a better world.

We the humans created the religions as a sort of investigative apparatus for discovering God’s guidance for creating the better world. The religions have been fulfilling their task successfully – except for the times of hot and cold religious wars. However, we have to remember that the religious wars were not a part of the God’s design – they were the outcome of some religious leaders’ fight for becoming a sort of human dictatorial leaders.

The Communists tried to replace the God’s Ten Commandments with the Communist Manifesto to empower the so-called proletariat and enslave the others.

The Nazis tried to replace the God’s Ten Commandments with the Main Camp to empower the so-called Aryan race and enslave the others.

ACLU and various anti-religious coalitions are trying to murder legally the Ten Commandments to impose their own design of a better world on all of us under the banner of social justice and human rights. Unfortunately, many in the US Government, among them some of our presidents and Supreme Court members, are assisting them.

Of course, I am not equating the Communists or Nazis with ACLU and anti-religious coalitions. I am just trying to emphasize the common desire of all anti-God-guided forces to remove the Ten Commandments from our life and then to fill in the spiritual vacuum by their own ideas.

By the way, it looks like that the forces fighting against legislating the state of Israel as the Jewish State are the same anti-Ten-Commandments forces – they want to substitute the Torah-based legislative foundation of the state of Israel by … something else of their own design.