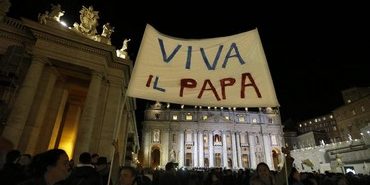 This treaty is very disturbing in that the Vatican is officially stating its unilateral recognition of Palestine as a state which it is not. This is a political hot potato in which the Pontiff has no business delving. The Pope has wittingly or unwittingly entered into an arena that is beyond the church’s scope and beyond the authority of his governance of the religious life of Catholic’s.

Certainly Pope Francis is aware of the political ramifications of his one-sided support of a two-state solution though it has yet to be accomplished. Since there is no conclusion, either he or his handlers must be chuckling in their contribution to the complicated Israeli-Palestinian issue for which the Pope has added more fuel to the already hot fire.

To be charitable, it may be possible that the Vatican believes they are helping to expedite a two-state solution in order to hasten a peace process thinking that any peace process is better than none. This, of course, does not take into consideration Israel’s legitimate concerns that all issues must be addressed appropriately from the start as there is no room for error or backtracking or for the compromise of Israel’s security. Even the Israeli Ministry of Foreign Affairs agrees that such recognition of an unrecognized Palestinian State is hurting rather than helping the process. Surely Pope Francis must know that “blessing” the Palestinian Authority with such recognition will only stir up more propaganda against Israel causing the fire to intensify. Trying to force a one-sided, two-state solution in favor of the Palestinians is wrong in every way. Any real peace treaty must take Israel’s concerns into consideration and must include Israel in the process. The Pope’s reference to the “State of Palestine” was totally irresponsible. The Palestinian PR machine will use the Pope’s words to their advantage to garner additional international attention and support in their favor.

As reported by The Jerusalem Post, Israel itself has been negotiating with the Vatican over the years but has been unable to reach an agreement on “Catholic life and activity in Israel.” There are other issues of concern to Israel such as Catholic rule over sites considered to be holy in Israel but these are separate from the stated reports of the Vatican’s agreement with the PA. How the Vatican managed to reach an agreement with the Palestinian Authority and not with Israel is difficult to understand. It is well known that Israel is the only country in the Middle East which respects people of all faiths. Other Middle Eastern countries give minimal or no recognition or protective status to those who do not embrace Islam and this includes the Palestinians. The number of Christians in Muslim-dominant countries and the West Bank has been decreasing at an alarming rate because of persecution while the percentage of Christians in Israel has been growing about 1.3 % annually.

It would be better for the Vatican to place its faith in G-d rather than the Palestinian Authority. The Pope should read carefully the word of G-d which says, in several passages, that the Israelites (the Jews) “shall dwell in the land I (G-d) gave to your fathers and I will be your G-d.” How can the Pontiff love Jesus and not love His (Jewish) people? Coming against G-d, the G-d of Abraham, Isaac and Jacob, is a very bad idea especially for the leader of the Catholic Church. Perhaps the Pope has been persuaded by Palestinian Christians who are claiming that Jesus was a Palestinian. Of course this is quite absurd. Jesus’ story from a solely historical perspective as recorded in the New Testament of the Bible clearly documents that He was born to a Jewish family and that He was born in Israel but Palestinian revisionists have been busy misrepresenting and distorting the facts in an attempt to rewrite history.

Whatever is contained in the “life and activity agreement” the Pope made with the Palestinians better be very explicit in its statements and he should be prepared for the contents to be garbled by Muslim radicals who will turn against the agreement or alter it to their full and exclusive advantage. Pope Frances has no experience in foreign policy and apparently lacks a real understanding of the historical record of Muslims and Middle Eastern cultures. Although the Pope has expressed remorse for the horrors of the Holocaust, he and his aides seem to have an anti-Israel agenda. He should realize that he is participating in promoting a climate that could give rise to another such atrocity. The Pope should stay out of the political arena which could very well backfire against him and against his Catholic constituents. Trampling on Israel and working against the Jewish people is likened in the Bible to “touching the apple of G-d’s eye” and for this he is at risk of being badly burned himself.