The Scorpion, The Frog and The Pope 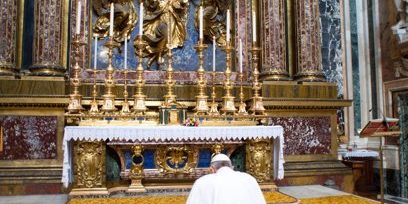 Pope Francis recently declared Palestine to be a state. Thus, he writes a new chapter in the divisive history between Catholics and Jews.

The history of the Catholic Church is a two-thousand year old story of anti-Judaism, conspicuous by frequent massacres, murders, forced conversions, torture, pogroms, expulsions, demonization and other unspeakable acts of violence and offense.

The fable of the Scorpion and the Frog illustrates the notion that certain acts are not merely random chance but are as predictable as a “DNA” profile.

A scorpion and a frog meet on the bank of a stream and the scorpion asks the frog to carry him across on its back. The frog asks, “How do I know you won’t sting me?”

The scorpion says, “Because if I do, I will die too.”

So they set out, but in midstream, the scorpion stings the frog. The frog has just enough time to gasp “Why?”

The scorpion replies: “Because it is my nature; it is what I do….”

Its purpose was to promote “unity and love among men.” At the same time, it served as a tool to start the repair of what had become an insurmountable rift between Catholics and Jews.

While the document has played a role in bridging one of the wide gaps between the two groups by releasing Jews from the burden of responsibility for the death of Jesus, it nevertheless fails to address a key issue for Jewish people — the declaration of Israel as their historic, legitimate and legal homeland.

During the first few months after Pope Francis’s March 2013 election, the Jewish community expressed hope that the Catholic Church would continue what appeared to be a warming relationship.

“Francis declared that ‘since the Second Vatican Council, we have rediscovered that the Jewish People are still for us the holy root that produced Jesus.’ He also stated that despite the horrors inflicted on the Jewish People by the Shoah, ‘God never abandoned his covenant with Israel, and notwithstanding their terrible suffering over the centuries, the Jewish People have kept their faith. For this, we will never be sufficiently grateful to them as a Church, but also as human beings….”

Some optimistic Jewish leaders argue that, while there is a lot more work to do, the process of reconciliation has been steadily moving forward.

Israel is battling for its legitimacy and its very existence on every front, and Jews throughout the world are confronting a vigorous, revitalized and often violent resurgence of anti-Semitism.

Even as the Palestinian Authority (PA) and Hamas call almost daily for death to the Jews, the Pope has declared terrorist and Holocaust denier, Mahmoud Abbas, “a man of peace.”

In his declaration of Palestine as a recognized “state”, the Pope has spurned Israel’s existential security concerns in order to advance a bond with the Palestinians before both parties have agreed to even basic terms of a peace agreement.

The symbolic timing (May 13) of the Pope’s ex officio declaration of a Palestinian state couldn’t be more obvious or more offensive to Israel: 1. Israel’s Independence Day celebrates the birth of the State in 1948; 2. Nakba Day (Catastrophe Day), the Palestinian day of mourning for the loss of their land to the State of Israel; 3.The summer celebrations of Nostra aetate, commemorating a vision of harmony.

Such a reckless affirmation is also a caustic reminder that Jewish-Catholic reconciliation work is far from complete.

Is the Catholic Church, like the scorpion, simply standing against the Jewish state because it is part of Church’s DNA? Do the Pope’s sympathies with the Palestinian narrative suggest the beginning of a return to the days of a Catholic Church riddled with thousands of examples of Jew-hatred?

Among the many diverse threads woven into the fabric of the Church, anti-Semitism stands at the forefront. The fabric of all of Christianity was set against the Jews from the outset.

While the timing of the Pope’s announcement was shocking, it was nonetheless predictable. It is an echo of a long-held theology of the Catholic Church, which turned against its own Jewish heritage within a mere fifty years after the Apostle Paul died.

The theological grandfather of contemporary Christian anti-Semitism is known as “Replacement Theology” or what is dubbed by scholars “supersessionism.” This is the ancient idea that the Christian Church “replaced” God’s “chosen” people.

By 135 CE, the newly emerging gentile Church had lost much of the Jewish vigor that had energized the period of the Hebrew New Testament writings.

In the generation after the Apostle Paul died, the gentile Church Fathers began penning tomes of anti-Jewish theology and commentary. Early second-century writers and theologians such as Tertullian and Origen inverted the Jewishness of the Jesus story and began to demonize the Jewish people, using their very own Hebrew scriptures as a cudgel.

The thesis of “Replacement Theology,” according to Dr. Jim Showers, Executive Director of Friends of Israel, “maintains that, because the Jewish people rejected Jesus as the Messiah, God has replaced or superseded ethnic Israel with the Church and punished them by rescinding all of His covenant promises.”

This early narrative proclaimed, “the Church as the New Israel,” and fused with the idea that “the Church is the heir of God’s promises to Abraham”. Thus, the Church nullified God’s original, unequivocal, irrevocable and eternal promise of the land and nation to Israel in His covenant with Abraham, Isaac and Jacob. It was these early Church Fathers (125 – 325 CE) who first carved the “DNA” of Jew hatred in stone.

At the Council of Nicaea in 325 CE, the Church put its final stamp on an anti-Jewish legacy. Among the Council’s many proclamations, it designated a pagan day, Easter, to replace Passover as a way to separate itself from its Jewish roots.

At the conclusion of the Council, Constantine’s summary letter to the attending Bishops stated:

“For it is unbecoming beyond measure that on this holiest of festivals we should follow the customs of the Jews. Henceforth let us have nothing in common with this odious people… We ought not, therefore, to have anything in common with the Jews… our worship follows a… more convenient course… we desire dearest brethren, to separate ourselves from the detestable company of the Jews… How, then, could we follow these Jews, who are almost certainly blinded.”

“Replacement Theology” deliberately poisoned the ancestral roots of Christianity. The two-thousand year war against the Jewish people began there.

Despite attempts by post-World War II popes to reconcile with the Jews, Pope Francis has, perhaps inadvertently, taken the first steps to disassemble any progress toward that goal. By preemptively positing a Palestinian state, he has essentially re-ignited the ceasefire lines of this age-old conflict. The Pope’s declaration inspires the already hate-infested Palestinians to commit murder with a symbolic pontifical blessing.

The New York Times reported on the occasion of Pope Francis’s 2014 visit to the Holy Land:

“Pope Francis plans to give a strong show of support for a sovereign Palestinian state when he makes his first visit to the Holy Land this weekend, becoming the first pontiff to travel directly into the occupied West Bank rather than passing through Israel.

The pope’s decision to fly straight to Bethlehem from Jordan would be a symbolic lift to the Palestinians at any time. But its resonance is even greater given his tremendous popularity, his focus on the downtrodden, and his timing amid the recent collapse of peace talks and the Palestine Liberation Organization’s unity pact with the militant group Hamas.”

On that same visit, the Pope also made a “surprise” stop at an Israeli security wall to pray and to pose for photos. “By chance,” he parked himself for prayer within camera range, beneath graffiti with the slogan: “Bethlehem look like Warsaw Ghetto.” Does he need to say more?

After nineteen centuries of Christian persecution; after a modern-day genocide upon which the Catholic world turned its back, just when the Jewish people and Israel might have looked for a ray of hope toward continued reconciliation, Pope Francis is making a pact with the devil. “Nothing new here,” said the scorpion to the frog; “it is what I do.”

Perhaps it is premature to assign the term “anti-Semitism” to Pope Francis’s current “missteps.” However, it does not push the envelope too far to suggest that the Pope’s view of the Jews and Israel is a product of a lifetime of Catholic and Replacement Theology bias.

At this momentous time, the Pope’s repentance would be a welcome acknowledgement of Israel’s right to exist.

Susan Warner is a Distinguished Senior Fellow of Gatestone Institute and co-founder of a Christian group, Olive Tree Ministries in Wilmington, DE, USA. She has been writing and teaching about Israel and the Middle East for over 15 years. She can be reached at israelolivetree@yahoo.com.

Giulio Meotti, an Italian journalist, writes for Israel National News and has authored the book, “The Vatican Against Israel: J’accuse”.

For those who are interested in exploring some of these historical issues in depth, there is an interesting and informative essay about the relationship between the Jews and the early church by John J. Parsons. Parsons has compiled a worthwhile, not too lengthy, discussion of Replacement Theology, anti-Semitism and other related issues.

Tertullian (circa 135CE) and Origen (circa 185CE) were two of the earliest theologians against the Jews. All of their extant writings are available online. Tertullian’s commentaries are entitled Adversus Judaeos (Against the Jews). Comments on Origen here.

Letter of Constantine to the churches after the Council of Nicaea (325AD).