The Two-State Solution is What Causes BDS 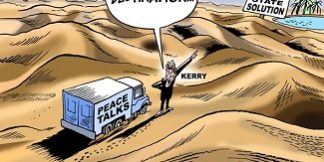 Why? Because in most people’s minds, the mere invocation of the “Two-State Solution” for Judea and Samaria is simply a Palestinian State on the ‘West Bank’ just like the Israeli state that exists in pre-1967 Israel. The world completely glosses over, doesn’t understand, or ignores all the Israeli “buts,” concerns, and caveats. The world just asks: Why has it taken Israel 22 years since the Oslo “Peace” Accords to create a simple Palestinian state on the land taken by Israel in the 1967 War? To the world, “Two-States” sounds so simple” and easy to do, so it must be Israel’s fault that it hasn’t given up the land already. After all, Israelis are the ones “holding” the land they have already agreed to give up in the first place.

To make matters worse, PM Netanyahu publicly endorses the Two-State Solution. Therefore, it appears to the world that even he wants Two-States, so the world merely wants to help and “tough love” him into doing what he really wants to do anyway. They believe that they are BDSing Bibi into creating his own self-endorsed demilitarized PA State. Does the world understand that a “Demilitarized ‘West Bank’ State” is an oxymoron? No. The truth is nobody in the world cares if the Peace Process is a fraud. Bibi said he wants a “Two-State” Solution and how can you be more Israeli than Bibi.

They believe that they are BDSing Bibi into creating his own self-endorsed demilitarized PA State. Does the world understand the caveats of Netanyahu’s Two-State Solution? No, it does not.

Obama himself recently stated on Israel’s Channel 2 TV station, that Netanyahu has “so many caveats, so many conditions, that it is not realistic to think that those conditions would be met any time in the near future.”

In answer to Obama, Netanyahu recently stated “This is real. How do you prevent tunnels from being dug from Qalqilya to Kfar Saba? … Today, the problem in Gaza is not the smuggling of weapons… There isn’t much of that. The problem is self-production in Gaza. … This doesn’t happen in Ramallah, because, ultimately, Israeli security forces are the main avenue of defense. The … demilitarization of Judea and Samaria does not go without saying. We must ensure there is a lasting security regime that provides answers to these problems, based on the premise that the region remains stable.” So the danger is not the weapons smuggling into Judea and Samaria but now also, the weapons productionthere. How can Israel possibly stop weapons production in the ‘West Bank’ if Israel is not fully in control? It can’t.

Then we have the Israeli “left”, the political and military elites. Their narrative of a Two-State Solution further insures BDS total “kusher-kusher” (translation: meat-meat, alluding to the fraudulent signs once placed in non-kosher Jewish-owned butcher shop windows to mislead customers into thinking that the signs said “buser kusher” – kosher meat – as the Hebrew letter for b ‘ב’ and the letter k ‘כ’ look almost the same.) legitimacy.

For how can you be anti-Semitic if Livni also says Israel is an ‘Apartheid State”? The Israeli leftist politicians and generals have convinced the world that only Israel stands in the way of a two-State Solution and “World Peace.” These Jewish messianics say we don’t even need the Palestinian Arabs to agree to a peace deal, Israel can simply leave unilaterally. Ehud Barak and Amos Yadlin, two world-respected Israel generals, tell the BDSers that Israel can unilaterally make a Two-State happen. And that it’s as easy as snapping your fingers.

What American college kid can defend himself against a BDSer who is quoting Yadlin and Ehud Barak, a former Israeli Prime Minister, a former Chief of Staff, and a former Defense Minister, who say Israel can unilaterally withdraw from Judea and Samaria and unilaterally create a PA State without anything from the other side? No Israel advocate can cogently explain why a BDS boycott shouldn’t be imposed on Israel for being the sole obstruction to “Peace.”

Finally, does anybody in the world even know exactly where the “Green Line/1967 armistice line” is? No, nobody has the slightest clue what Netanyahu is talking about when he says he doesn’t want the ‘West Bank’ to turn into Gaza Rocket State either. Why? If the world has no idea about the distances the rockets fired from Gaza reach, and no idea where the ‘West Bank’ is, then nobody, but nobody, has the slightest idea of what Netanyahu is talking about when he says the West Bank will become another Gaza Rocket State.

The Two-State Solution and the BDS movement are genetically equal. Both are predicated on the general public’s lack of knowledge and basic curiosity.