Op-Ed: Security, yes, but National Patrimony is not Negotiable 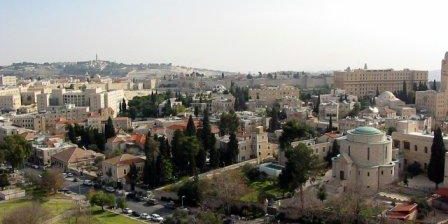 “Then said Satan: This besieged one, how shall I overcome him?
He has courage and ability, he has weapons and imagination.

“So he said: I shall not take his strength, nor muzzle nor bridle him.
Nor soften nor weaken his hands, only one thing I shall do;

“I shall dull his brain and he will forget that he is in the right.”

So wrote the Israeli poet, Natan Alterman, in his poem, Gone like a Dream. He was expressing his deep anxiety over the weakening resolve of Jews in Israel and in the Diaspora to proclaim Jewish historical rights throughout the reconstituted Jewish homeland.

This inevitably led to a fateful abandonment by so many Israeli politicians and successive governments to the paramount needof responding effectively to Arab and pro-Arab propaganda, which sought to deny the reconstituted Jewish state every inch of sovereign ancestral Jewish land from the Mediterranean Sea to the River Jordan and delegitimize Jerusalem as Israel’s unitedcapital.

For 48 long years, since the liberation of east Jerusalem and biblical Jewish Judea and Samaria from illegal Jordanian occupation – territory the world grotesquely prefers to call the West Bank – the beloved Jewish heartland has remained in a political limbo and not fully annexed. Instead, too much has been sinfully abandoned.

Israel’s foolish failure to declare again and again its historical and ancestral patrimony in its own biblical, physical and spiritual homeland has allowed a hostile world to thus assume that Israel itself does not believe it has legal or indigenous sovereignty in its own territory or in its capital, Jerusalem.

Like Moshe Dayan’s calamitous decision to give away the keys of the Temple Mount to the Jordanian Muslim Waqf, this betrayal of the holiest Jewish site, along with the Jewish heartland of Judea and Samaria, has become a living nightmare for Israel.

Israeli leaders and politicians always emphasize the security needs of the Jewish state to foreign governments and the international media, but fatefully neglect to underscore the ancestral, spiritual, native and indigenous Jewish ties to the Land; inextricable ties spanning millennia, which no other people possess.

Both acts of searing stupidity could so easily have been avoided, but the seeming need by so many on the left in Israel to appease and placate the international corridors of power by portraying Israel as willing to abandon the G-d given land andbetray its own history, all for the sake of a delusional peace, has had tragic consequences for the Jewish state.

It is this failure which has encouraged and largely led to the growing and pernicious power of the BDS movement along with the dire threat of international isolation of Israel.

Jew haters cannot contain their infernal glee at the prospect of destroying the Jewish state by forcing upon it the illegitimate birth of yet another Arab and Muslim entity wrenched out of what little remains of the Land of Israel. Is Gaza not enough?

Biblical Jewish Judea and Samaria would be lost yet again and a Muslim Arab terror state that has never existed in all of recorded history, and which arrogates to itself the name Palestine, would emerge as a terminal cancer eating away at theJewish state.

Israel’s abject failure to claim and reinforce its empirical rights to all the Land of Israel has allowed the fraudulent Arabs who call themselves Palestinians to write their criminal and fabricated script, which a hostile world now eagerly embraces.

Many pro-Israel individuals continue fighting alone and unaided against an unremitting and hostile media world that would happily consign Israel to the abyss.

They face an overwhelming onslaught – not of military might – but from a war of false and contrived words, however twisted those words are.

The success of those anti-Israel and anti-Jewish lies can be in large part levelled at the inability and failure of the majority of Israeli politicians to proudly proclaim the eternal sovereignty of the Jewish people in its own land – fearlessly rejecting any and all Arab and Muslim claims to Israel.

The Muslim Arabs and their supporters have learned this lesson all too well, for they have succeeded in doing what years ofArab and Islamist warfare and terror have failed to do. They have isolated the Jewish state as never before and won millions around the globe to their cause by demonizing Israel with the Goebbelian technique of the Big Lie.

The result is a cascade of anti-Jewish and anti-Israel NGOs swarming over the Jewish homeland like human locusts, aided and abetted by European governments, by the U.S. State Department, by many within liberal churches such as the Quakers and Presbyterians, and by the kapos of our time, J-Street, the New Israel Fund, and individual self-hating Jews who spew their slimy malevolence in the colleges and universities of America, Europe and Britain.

To return to the words of Natan Alterman. Satan is indeed busy. He hates the light of Israel. He hates the creativity, the progress and the freedoms that Israel spreads throughout the world.

Above all, he hates the reconstituted Land of Israel and in particular the precious Jewish heartland of Judea and Samaria. So he has dulled the intellect of so many in Israel’s governments and led them along the dead end path of the peace process,forcing them to taste the bitter fruits of appeasement.

There is an urgent need to overcome profound ignorance in a world fast succumbing to a false Arab narrative that would leave ancestral Jewish land deserted and in the hands of thieves.

The dark forces of Arab and Islamic hate, along with the legions of duped non-Muslim supporters in the West, will not prevail if leading members of the Israeli government forcefully emphasize the unassailable historic right of the Jewish people, bar none, to the ancient Jewish homeland.

Israeli leaders can do this by no longer displaying a fatal and suicidal willingness for territorial compromise in the discreditedOslo peace process and by finally possessing all of the G-d given covenanted land.

Israel must proclaim unremittingly to all the media mavens, be they the haughty BBC talking heads, the leftist apparatchiks ofNPR, and all the clueless U.S. mainstream media drones about the biblical, ancestral, spiritual and physical Jewish roots in the reconstituted homeland.

They must be told again and again that Jewish restoration in its own native land did not germinate during the long exile because of European persecution, whether in the Holocaust or the Catholic Inquisition, or in the systematic slaughter of Jews during the Crusades and the Russian pogroms. It began four thousand years earlier in Genesis, Chapter 12.

It is this millennial and inextricable association with the Land that both Israeli leaders and pro-Israel supporters must proclaim relentlessly until the army of duped sceptics, who for so long have drunk the fraudulent ‘Palestinian’ Kool Aid, finally wake up.

True, many still will not, but it will not be for the lack of Israel and its supporters trying.

The hope is that many throughout the world – of all faiths or none – will more than ever be educated finally in the eternity of Israel; that the Jewish people alone have sovereignty from the Great Sea to the Jordan River, even unto Gilead, and that the Jewish People are not “foreign conquerors or settlers” in their own ancestral and biblical land.

Let us also hope that Natan Alterman’s great fear expressed in the words of Satan, “I shall dull his brain and he will forget that he is in the right,” will never come true.