Who is Jimmy Carter but a thorn in Israel’s side? 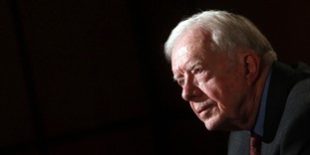 Former US president Jimmy Carter was recently scheduled to visit Israel, Gaza and the West Bank for the purpose of mediating the stalled Palestinian/Israel two-state negotiations. People are asking sincere questions: “Why would a former American president insert himself between Israel and the Palestinians, especially when he appears to be favoring the Palestinians? What is his motivation?” Americans scratch their heads in disbelief and curiosity, because these actions do not make sense to the average church-going American, considering that Carter was once a pastor and the US and Israel have a Biblical connection.

Indeed, there is a rift between Prime Minister Benjamin Netanyahu and Jimmy Carter concerning Carter’s motivations; that President Reuven Rivlin refused to meet with Carter is indicative of the animus between Carter and Israel. In fact, according to an Israeli diplomatic official, Israel’s foreign ministry recommended President Rivlin and Carter not meet because “those who harm Israel will not meet with the president.” Those are strong words. But Carter issued strong words himself when he attacked Netanyahu in the media for opposing a two-state solution during Netanyahu’s election campaign. Why would any of Israel’s leaders meet face-to-face with a man who pushes a controversial position that defames Israel? Carter is quoted as praising the Palestinian Authority leadership for their “wisdom.” Carter has admitted that he represented the “dreams and aspirations of Palestinians.”

Carter and his traveling companions were in Israel at the behest of an organization that refers to Carter and a couple handfuls of former world leaders as being elder statesmen a.k.a., “The Elders.” Carter and other “Elders” promote a two-state solution that would leave Israel without fully defensible borders. “The Elders” also praise the Palestinian Authority (PA) via Mahmoud Abbas. Carter is telling the world (via the press) that “Arab-Israel peace talks are ‘dead’ because of Netanyahu.” Carter conveniently omits the thousands and thousands of rockets that the Palestinians have launched against Israeli citizens over the years. He omits the fact that radical Islam calls for the “Death of Israel” and, for that matter, the “Death of America.”

According to a recent article, Carter is saying that US influence on the two-state solution is so low that the EU should play a strong and active role in promoting Palestinian rights and, of course, peace by exerting European Union leadership. And, yes, France is indeed leading efforts to draft a UN Security Council resolution that would set rules for ending the Israeli-Palestinian conflict. Peace to Carter means Israel loses and the Palestinians win. His attitude couldn’t be clearer than the title of Carter’s 2006 book, “Palestine: Peace Not Apartheid.”

There’s a saying, “Birds of a feather fly together.” If you want to determine the root of a man’s reasoning look at his associates. If you want to know why Carter would want to go to the West Bank (so called occupied territories) and to Gaza, Carter’s Nobel Peace Prize (1979) was because he was the designated “head” of international observers who monitored the January 2006 Palestinian parliamentary election that installed the terror group Hamas as a joint government entity with the PA in Gaza, whose border is adjacent to southern Israel.

Now that you see Jimmy Carter’s close association with the United Nations, would you feel comfortable inviting him into your own home? Would you trust his “wisdom” and his ideas for “peace?” For a man of God to associate with such Godless an entity as the United Nations, an entity designed to govern Henry Kissinger’s description of the coming new “World Order,” is troubling indeed and down right scary.

May God bless Israel. May God bless Benjamin Netanyahu for his strength and courage for standing against evil. As Dietrich Bonhoeffer (1906 – 1945), a German Lutheran pastor, theologian and anti-Nazi dissident once said, “Silence in the face of evil is itself evil: God will not hold us guiltless. Not to speak is to speak. Not to act is to act.”