Netanyahu: Jerusalem has and always will only be the capital of the Jewish people 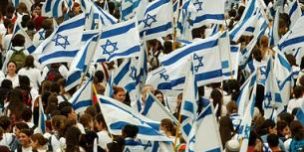 Jerusalem historically has been the only capital of the Jewish people, and so it will remain, Prime Minister Benjamin Netanyahu declared Sunday at the government’s official Jerusalem Day ceremony at Ammunition Hill.

“We need to tell the truth, without fear,” Netanyahu said. “This is where we began our path as a nation, this is our home and this is where we will stay.”

In comments that left no doubt as to whether he would agree to share the capital with a Palestinian state, Netanyahu said Israel will ensure that the city remains open and tolerant.

“Only under Israeli rule will there be freedom of worship for all religions in Jerusalem,” he said. “Believers pray at their holy sites not in spite of our rule in the city, but precisely because of it.”

The prime minister, who recalled growing up in a divided Jerusalem and catching a glimpse of the Old City through binoculars from certain vantage points in the capital, said it would never again revert to being “wounded and split.”

“We will forever preserve an undivided Jerusalem under Israeli sovereignty,” he said. “Who opposes our presence in Jerusalem?” he asked. “Those who refuse to recognize our right to exist as a sovereign nation in our own state. They see us as a foreign object that needs to be uprooted.”

The prime minister also tied the Iranian threat to Jerusalem.

Netanyahu quoted Iran’s leader Ayatollah Ali Khamenei as saying on Saturday, against the background of tension over shipping in the Persian Gulf, that the US is the one making the Middle East insecure.

“This is what is being said when Iran doesn’t yet have nuclear weapons,” he said. “It is not too late to step back from the plan to give Iran a deal that will pave an open path to nuclearization.

We are opposed to that deal, and we are not the only ones. There is a need for a better deal, because it is forbidden to let the extremists get what they desire.”