Debunking the claim that “Palestinians” are the indigenous people of Israel 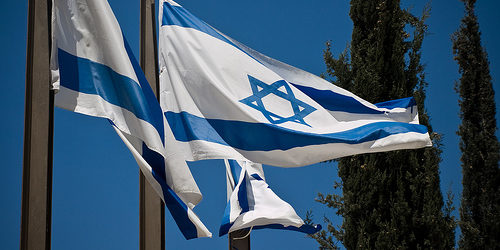 The wars between Israel and its Arab neighbors were fought for many years on the battlefield between armies. In recent decades the arena of conflict has shifted from hand-to-hand combat to a war of narratives.

Everybody agrees that the current affluence of Israel, its modern infrastructure and economy were developed by the Jews. The Palestinian Arab narrative is that as the ancient, indigenous people of Palestine they feel dispossessed and they deserve to take over Israel’s riches. Jewish claims to their heritage in the land of Israel are supported by abundant archaeological artifacts and historical records.

Meanwhile, there are no records to support the Palestinian narrative. In history, art and literature there is no trace at all of any Muslim people referred to by anybody as “Palestinians.”

Records show that it was 19th and 20th century Jewish settlement and the resulting employment opportunities that drew successive waves of Arab immigrants to Palestine. “The Arab population shows a remarkable increase ….. partly due to the import of Jewish capital into Palestine and other factors associated with the growth of the National Home..” (The Peel Commission Report – 1937)

“..in the Jewish settlement Rishon l’Tsion founded in 1882, by the year 1889, the forty Jewish families settled there, had attracted more than four hundred Arab families…. Many other Arab villages had sprouted in the same fashion.” (Joan Peters – From Time Immemorial p. 252 – referenced further as: FTI)

British PM Winston Churchill said in 1939: “.. far from being persecuted, the Arabs have crowded into the country ..”

Before the Six Day War in 1967, when Jordan controlled the West Bank and Egypt ruled in Gaza, there was never any suggestion on the part of the “Palestinians” that they wanted independence in their ancestral homeland. The reason was that the “Palestinian” nation hadn’t been invented yet.

In fact, before the State of Israel was born, the term “Palestinians” was used by the Jews to refer to themselves and their organizations. “The Palestine Post”, the Palestine Foundation Fund, Palestine Airways, and the Palestine Symphony Orchestra were all purely Jewish enterprises.

We first hear of Arabs referred to as “Palestinians” when Egypt’s President Nasser, with help from the Russian KGB, established the “Palestine Liberation Organization” in 1964. It was only during the 1970s that the newly minted “Palestinians” began to promote their narrative through murder and assassination. The Arabs have justified their attacks as acts of the indigenous people struggling for national liberation.
Joan Peter’s research has exposed the truth about Arab claims

Many individual authors have challenged the “Palestinian” narrative. Among these, one of the most ambitious was Joan Peters, who in 1984 published her thoroughly researched study of Arab immigration into Palestine, From Time Immemorial (FTI). Peters assembled many accounts of 19th century travelers’ journeys through the Holy Land that paint the picture of a forsaken and almost uninhabited land.

Mark Twain’s comments in 1867 are probably the best known: “….. A desolate country whose soil is rich enough, but is given over wholly to weeds… a silent mournful expanse…. a desolation…. we never saw a human being on the whole route…. hardly a tree or shrub anywhere.”

Peters documents how the current land of Israel with its millions of Arabs and Jews gradually emerged from its desolate 19th century beginnings. She analyzes the respective populations of Muslims, Christians and Jews based on data available from existing sources including Ottoman census figures, government documents, old publications, scientific research, etc.

Peters’ work was received with accolades and praise in most quarters and with predictable outrage by the supporters of the “Palestinian” narrative The vehemence with which Peters was attacked was very telling. She had undermined the basis for the delegitimization of Israel. She had shown that the vast majority of “Palestinians” are not indigenous to Palestine but rather descendants of the Arab economic migrants who arrived in the late 19th and 20th centuries.

Peter’s thorough analysis consists of 410 pages of text and 190 pages of documentary appendices. The general public could hardly be expected to wade through the 600-page tome full of data tables and quotes from hundreds of sources. Thus the book was unable to reverse the continuing fiction of the indigenous “Palestinian” people whose lands have been stolen by the Jews.
A simple new way to prove Peters’ key conclusion

In the midst of various arguments, what has been overlooked is a simple and incontrovertible way to prove that the vast majority of “Palestinians” are the descendants of the relatively recent Arab immigrants.

Peters calculated that in 1882, just the non-nomadic, settled Muslims in Palestine numbered 141,000. Among them, those that resided in Palestine before the 1831 Egyptian invasion numbered 75 percent, or 105,700 (FTI page 197). By 2015, descendants of these 105,700 persons can trace their linage in Palestine for almost 200 years. Therefore, one might consider them to be the indigenous residents. The date 1831 is important, because this was the beginning of the war with Arab Egypt, during which many thousands of Arabs settled in Palestine and changed its demographics.

The number of 105,700 thousand settled Muslims is in general agreement with other important data. Walter Lowdermilk gives the total number of 200,000 people residing in Palestine in 1850 (page 76 – Palestine Land of Promise 1944). Lowdermilk’s number includes Jews, Christians, travelling nomadic Bedouins and settled Muslims. It also includes Arabs that immigrated after the war of 1831. Arthur Ruppin estimates the total population in year 1882 as 300,000 Palestinian inhabitants, including nomadic and settled Muslims, Christians and Jews (The Jews in the Modern World, MacMillan – 1934 page 368).

If these 105,700 indigenous Muslims were to increase in numbers only through natural population growth, how many would they number today in 2015? This would represent the size of this population as if there were no Muslim immigration at all.

We can calculate the estimated 2015 native population, based on natural rates of population growth. I assume that the post-1882 Muslim population in Palestine — apart from immigration — grew at approximately the same rate as the populations of neighboring Syria, Egypt and Lebanon for which rates we have reliable data. That rate of growth was 1.1% per annum. (FTI page 529 table in note 78) **

I used the compounded interest formula to do the math. Applying the 1.1% growth rate to the Muslim population resident in Palestine in 1882 yields a total number of 453,000 Muslim descendants in 2015 of these original 105,700 native people.

According to the 2015 World Almanac, the current “Palestinian” population, including Israeli Arabs, and Arab residents of Gaza, Golan, Judea and Samaria totals 10,523,715 people. 453,000 descendants of indigenous Muslim residents constitute only 4.3% of the current “Palestinian” population. Therefore the other 95.7% of present-day “Palestinians” are clearly those Arabs and their descendants who migrated to Israel between 1831 and 2015.

Despite the substantial documentation assembled by Peters, demonstrating massive Arab immigration into Palestine, anti-Israel propagandists continue to deny it. Based on what we know today, and the simple truths of basic math, the issue has become clear and unambiguous. All historic records indicate that only insignificant number of long-term settled Muslims were present in Palestine before 1882, when the large Jewish immigration began. Muslim Arab numbers increased dramatically as Jewish settlements developed infrastructure and provided work opportunities to Arabs from the neighboring countries.

Also worth noting is that the “indigenous” 4.3% comprised many non-Arab nationalities. All of them were swamped by the Arab immigrants and within a few generations largely lost their identity.

Given the complete absence of any historical record to the contrary, we can authoritatively say that the “Palestinian people” never existed until they were invented in the 1960s as a tool for continuing the Arab war against Israel.

The claim that “Palestinians” are the indigenous people of Israel and that most of the present Palestinian Arabs have lived in these lands since time immemorial is a total fraud. Albeit posthumously, Joan Peters has had the last word on the subject.