The Iran deal: Anatomy of a disaster 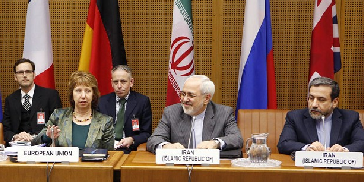 It was but a year and a half ago that Barack Obama endorsed the objective of abolition when he said that Iran’s heavily fortified Fordow nuclear facility, its plutonium-producing heavy-water reactor and its advanced centrifuges were all unnecessary for a civilian nuclear program. The logic was clear: Since Iran was claiming to be pursuing an exclusively civilian program, these would have to go.

Yet under the deal Obama is now trying to sell, not one of these is to be dismantled. Indeed, Iran’s entire nuclear infrastructure is kept intact, just frozen or repurposed for the length of the deal (about a decade).

In an agreement that he called “a long time coming,” President Obama announced that the U.S., Iran and other countries have reached a historic framework to curb Iran’s nuclear program. (AP)

And upon the expiration of the deal, conceded Obama Monday on NPR, Iran’s breakout time to a nuclear bomb will be “almost down to zero,” i.e., it will be able to produce nuclear weapons at will and without delay.

And then there’s cheating. Not to worry, says Obama. We have guarantees of compliance: “unprecedented inspections” and “snapback” sanctions.

The inspection promises are a farce. We haven’t even held the Iranians to their current obligation to come clean with the International Atomic Energy Agency on their previous nuclear activities. The IAEA charges Iran with stonewalling on 11 of 12 issues.

As veteran nuclear expert David Albright points out, that makes future verification impossible — how can you determine what’s been illegally changed or added if you have no baseline? Worse, there’s been no mention of the only verification regime with real teeth — at-will, unannounced visits to any facility, declared or undeclared. The joint European-Iranian statement spoke only of “enhanced access through agreed procedures,” which doesn’t remotely suggest anywhere/anytime inspections. And on Thursday, Iran’s supreme leader ruled out any “extraordinary supervision measures.”

The IAEA hasn’t been allowed to see the Parchin weaponization facility in 10 years. And the massive Fordow complex was disclosed not by the IAEA but by Iranian dissidents.

Yet even if violations are found, what then? First, they have to be certified by the IAEA. Which then reports to the United Nations, where Iran has the right to challenge the charge. Which then has to be considered, argued and adjudicated. Which then presumably goes to the Security Council where China, Russia and sundry anti-Western countries will act as Iran’s lawyers. Which all would take months — after which there is no guarantee that China and Russia will ratify the finding anyway.

As for the “snapback” sanctions — our last remaining bit of pressure — they are equally fantastic. There’s no way sanctions will be re-imposed once they have been lifted. It took a decade to weave China, Russia and the Europeans into the current sanctions infrastructure. Once gone, it doesn’t snap back. None will pull their companies out of a thriving, post-sanctions Iran. As Kissinger and Shultz point out, we will be fought every step of the way, leaving the United States, not Iran, isolated.

Obama imagines that this deal will bring Iran in from the cold, tempering its territorial ambitions and ideological radicalism. But this defies logic: With sanctions lifted, its economy booming and tens of billions injected into its treasury, why would Iran curb rather than expand its relentless drive for regional dominance?

An overriding objective of these negotiations, as Obama has said, is to prevent the inevitable proliferation — Egypt, Turkey, the Gulf states — that would occur if Iran went nuclear. Yet the prospective agreement is so clearly a pathway to an Iranian bomb that the Saudis are signaling that the deal itself would impel them to go nuclear.

What is the alternative, asks the president? He’s repeatedly answered the question himself: No deal is better than a bad deal.