Is the US embracing Iran at Israel’s expense? 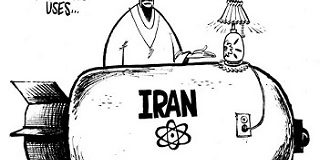 Israel is “very concerned” about the American government’s eagerness to reach a nuclear agreement with Iran, Israeli officials said on Saturday night. According to the officials, Israel’s assessment is that U.S. President Barack Obama is “rushing to an agreement” with Iran.

Israeli officials also believe that elements within the international community will try to apply pressure on Israeli regarding the peace process with the Palestinians as a means of distracting attention away from the emerging “bad deal” with Iran.

International Relations, Intelligence and Strategic Affairs Minister Yuval Steinitz and National Security Adviser Yossi Cohen will travel to Europe this week for a series of meetings on the Iranian nuclear issue. Ahead of their departure, an Israeli official said on Saturday that the Israeli government has been trying to influence the international discussion about the negotiations with Iran but this effort has not been successful.

“Israel will continue to act and speak out against the deal with Iran,” the official said. “ has received a renewed mandate from the people to lead and advance along his path.”

Another Israeli official said, “A look at the negotiations between the U.S. and Iran shows an alarming situation in which there is a concern that is embracing Iran at Israel’s expense. We will obviously oppose and stand behind our position, which is the correct one.”

The Israeli position on Iran received backing over the weekend from Republican Senator Lindsey Graham of South Carolina, who is the chairman of the Senate Appropriations Committee’s Subcommittee on State, Foreign Operations and Related Programs. Speaking with Fox News, Graham warned he would move to cut American funding to the U.N. if Obama asked the U.N. to lift sanctions on Iran as part of a nuclear deal. In 2015, the U.S. has earmarked $654 million for the U.N.

“Twenty-two percent of the funding for the United Nations comes from the American taxpayers, and I’m in charge of that account,” Graham said. “I’m not going to allow the United Nations to be used as a way to get around the United States Congress for a deal that affects the very existence of Israel and our own national security.

Graham said the Obama administration was about to “make a mistake for the ages” by reaching a nuclear agreement with Iran.

In an interview with the Huffington Post published on Saturday, Obama said the results of the Israeli elections last week would not have a significant impact on his ability to sell a nuclear deal with Iran to the American public and Congress.

“Obviously there’s significant skepticism in Israel generally about Iran,” Obama said. “And understandably. Iran has made vile comments, anti-Semitic comments, comments about the destruction of Israel. It is precisely for that reason that even before I became president, I said Iran could not have a nuclear weapon.”
Regarding his relationship with Netanyahu, Obama said, “I had a chance to speak to Prime Minister Netanyahu , congratulated his party on his victory. I did indicate to him that we continue to believe that a two-state solution is the only way for the long-term security of Israel, if it wants to stay both a Jewish state and democratic. And I indicated to him that given his statements prior to the election, it is going to be hard to find a path where people are seriously believing that negotiations are possible.

“So we’re evaluating what’s taking place. I think Prime Minister Netanyahu still has to form a government; we’ll be in close consultation with them. We’re going to make sure, regardless of disagreements we have on policy, that our military and intelligence cooperation to keep the Israeli people safe continues and that cooperation also helps the American people stay safe.

“But we are going to continue to insist that, from our point of view, the status quo is unsustainable. And that while taking into complete account Israel’s security, we can’t just in perpetuity maintain the status quo, expand settlements. That’s not a recipe for stability in the region.”

Asked whether he believed Netanyahu’s statements about a Palestinian statehood, Obama replied, “Well, we take him at his word when he said that it wouldn’t happen during his prime ministership, and so that’s why we’ve got to evaluate what other options are available to make sure that we don’t see a chaotic situation in the region.”

Obama was also asked about his reaction to Netanyahu’s Election Day statement about Israel Arab voters heading to the polls “in droves.”

“We indicated that that kind of rhetoric was contrary to what is the best of Israel’s traditions,” Obama said. “That although Israel was founded based on the historic Jewish homeland and the need to have a Jewish homeland, Israeli democracy has been premised on everybody in the country being treated equally and fairly. And I think that that is what’s best about Israeli democracy. If that is lost, then I think that not only does it give ammunition to folks who don’t believe in a Jewish state, but it also I think starts to erode the meaning of democracy in the country.”

In response to reports that the U.S. was considering not vetoing anti-Israel resolutions at the U.N. Security Council, which could clear the way for unilateral Palestinian diplomatic initiatives against Israel, an Israeli official said, “Where was the White House when Abbas Hamas or turned to the International Criminal Court in The Hague? We didn’t hear support for unilateral moves then.”

The Atlantic columnist Jeffrey Goldberg wrote on Friday, “It’s clear that President Obama is not particularly interested in spending political capital on behalf of Netanyahu in order to block a resolution recognizing Palestinian statehood.”

“We seem to be moving into a different phase, one that Obama did not see coming — or would not acknowledge that he saw coming,” Goldberg wrote. “The question on the table now is not about the U.S. ability to protect Israel internationally, but its willingness.”

Meanwhile, White House Chief of Staff Denis McDonough is scheduled to address the J Street conference in Washington on Monday.