PM: I won’t agree to rotation government with Herzog 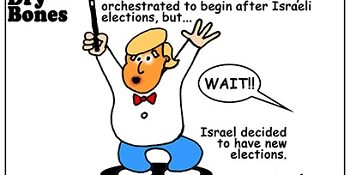 “Unless we close the gap in the coming days, there is a concrete danger that Livni and Herzog will be prime ministers here, with the help of the Arabs,” Prime Minister Benjamin Netanyahu told Channel 2 on Thursday, referring to his chief rivals’ — the Zionist Union leaders — growing lead in the polls, days before the March 17 election.

In a separate interview with Channel 1, Netanyahu warned that “Herzog will make withdrawals, divide Jerusalem, and he has even said that he wouldn’t mind appointing Ahmad Tibi to the Knesset Foreign Affairs and Defense Committee.”

“The biggest problem is that even though most of the public wants me as prime minister, they don’t understand that they cannot afford to vote for other parties,” Netanyahu said.

“I will only be elected if the Likud party wins the most seats. Parties like and may end up joining forces with the Left, and then they will have unwittingly crowned Livni and Herzog as prime ministers. Kahlon hasn’t pledged to endorse me and furthermore, his No. 2, Yoav Galant, has actually declared that they would endorse Herzog.

“There is a large coalition of parties seeking to install a left-wing government. Why do they constantly attack me, my family and my wife? Because all those who want to see Israel pull out understand that if they manage to hurt me and remove the Likud party from power, they will have removed the Right from power altogether.”

Netanyahu said the coalition seeking to oust him is generously funded by foreign donors who are also encouraging a high voter turnout among Israel’s Arab and left-wing voters in an effort to replace the existing leadership. He characterized the campaign against him as “unprecedented.”

The prime minister also responded to the campaign against him launched by a group called Commanders for Israel’s Security, comprising high-ranking former defense officials.

“It is not all defense officials who are against me,” Netanyahu said. “It is only the left-wingers who think that Israel should withdraw from more territory. They are the ones against me.”

Remarking on the housing crisis in Israel, which many voters see as a key election issue, Netanyahu said that “we haven’t done enough on housing. We have achieved a lot in terms of the economy, infrastructure, transportation and security, but on this issue we didn’t do enough, and we definitely need to rectify that. I hear about young couples and recently discharged soldiers who understandably want to purchase homes at a reasonable price. In order to allow them to do that, we have set a number of measures in motion, and I want the opportunity to see these measures through.”

A week after former Mossad chief Meir Dagan made an emotional speech at an anti-Netanyahu rally, the prime minister remarked that Dagan’s criticism “didn’t stop him from asking for his term to be extended twice under my leadership as prime minister. Certainly there is an element of varying opinions. He is wrong, and all those who claim that we can withdraw and that it doesn’t matter where our borders are, are wrong. On the outskirts of Tel Aviv we will not be able to defend ourselves.”

Netanyahu was asked whether he would be willing to consider a rotating government in collaboration with Herzog.

“I will not be a rotating prime minister; I don’t think a rotation government is a viable option. There is a clear choice here between two separate paths,” he said.