Obama is openly colluding with the enemy 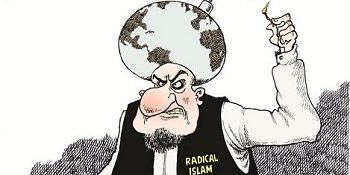 We are in the middle of a hot war in the Middle East, with constant terror attacks all over the world, including the United States, Europe, and Asia. The enemy is called violent Islam, or radical Islam, or fascist Islam, or reactionary Islam, or merely “orthodox Islam.”

We constantly waste time quibbling about the name. But we know the enemy by now.

(And yes, there are plenty of Muslims who want peace, but who are too scared to speak out, with some brave exceptions I mention below. As long as the West colludes with violent Islam, peaceful Muslims will be too scared to speak out. As long as we fail to stand for freedom, we will be supporting the worst of the worst, who always terrorize their own populations first.

For fifty years, Muslims did not actively practice jihad against the West – until Jimmy Carter betrayed our ally the shah of Iran, and therefore empowered the first jihad-preaching Islamofascist regime in the world, the mullahcracy of Iran. Because Carter was the weak horse, millions of Muslims around the world sensed a change in the wind – and that is why jihad is now breaking out all over.)

The single most shocking fact today is that the U.S. government, under President Obama, is constantly colluding with the enemy.

Check out of the facts for yourself. Don’t take anybody’s word for it. Make your own informed decision. This is a question not of opinion, but of fact.

When a serving U.S. president has lost Foreign Policy magazine, the in-house trade union rag for the State Department, things have come to a bad pass. But here is Foreign Policy on Obama’s “pivoting to Iran.”

But wait! Our good friend Recip Erdoğan of Turkey, “Obama’s best friend in the Middle East” is now supporting ISIS – the worst mass murdering would-be regime on the Sunni side of the street.

Turkey has openly established recruiting stations for ISIS, called “IS consulates,” and Obama’s next “best friend” Qatar is feeding billions of dollars to ISIS. Meanwhile, the Muslim Brotherhood, Obama’s biggest ideological ally, is also backing ISIS. Don’t believe the cover story that ISIS just mushroomed up by a miraculous dispensation from on high.

You may not remember the name of Mohammed Elibiary, a top advisor to our Homeland Security folks. Mr. Elibiary is a big name among the Moobs (naturally). Patrick Poole has a nice summary of Mr. Elibiary’s thoughts here. In a sane world, this man should be on our terrorist suspect list, but instead he is “advising” our Department of Homeland Security.

(And you remember Huma Abedin, another Moober loyalist, walking with Hillary with their heads devoutly covered over? Muslim Brotherhood money goes to the Clintons, the Carters, and the Obamas, and they all give real value for that money.)

The Moobers are a Muslim fascist cult going back to 1928, when the Mufti of Jerusalem was in an open alliance with Hitler, helping to send Arabs troops to fight for the Nazis.

In 1981 the Moobs assassinated Egypt’s president, Anwar Sadat, for making peace with Israel.

In 2011 they were complicit in the overthrow of Hosni Mubarak, who was also trying to keep the Egypt-Israel peace treaty alive.

And today, in collusion with Obama, the Moobers are in open rebellion against the government of President El Sisi, the biggest peace advocate in the Arab world. (See below.)

All the signs therefore point to Obama as a major backer of ISIS on the one side, and of the Khomeinist nuclear-going tyranny on the other.

If they’re really unspeakably evil, you can expect Obama to support them.

Obama’s half-brother Malik Obama is a big Muslim Brotherhood money man. The MBs have espoused jihad against the modern world since 1928, when their organization was founded. Malik “oversees Muslim Brotherhood investments worldwide,” and that means buying up politicians, like you-know-who. Malik is also a funder of Hamas, which has an identical war theology to ISIS’s.

The Muslim Brotherhood assassinated President Anwar Sadat of Egypt forty years ago for making peace with Israel. After Obama pressured Egypt’s longest-lasting peace-keeping president, Hosni Mubarak, into leaving office, at the beginning of the completely fraudulent “Arab Spring,” a Muslim Brotherhood thug was “elected” president and started to purge the judiciary and military in Egypt.

Egypt’s political elites revolted, and with the help of Saudi Arabia, they overthrew the Islamic fascists in favor of General El Sisi.

This administration still hates El Sisi and is still plotting with the Muslim Brotherhood against El Sisi.

Obama’s collusion with undeniable evil is especially hard for Americans to believe, because it’s emotionally painful to see your own president colluding with the worst mass murderers since the Nazis. Just keep looking at the facts.

What Mr. Obama does not support is Muslims who want peace, and who are willing to risk their lives to say so.

The most prominent example of a pro-peace leader today is President El Sisi of Egypt, who just told his religious establishment at Al Azhar University in Cairo that Islam “needs a religious revolution.”

Obama said nothing. Instead, he just keeps backing the most barbaric and disgusting ideology in the world.

Now the Iranian caliphate is on the march, just as surely as the Third Reich was on the march in Hitler’s time.

Three high-ranking Iranian officers were just caught in a planning meeting with three Hezb’allah terrorist leaders, on the Syrian border just north of Israel. The Israelis caught wind of the meeting and bombed them to smithereens. Now the mullahcracy are boiling over with rage, but they are still afraid of Israel’s nuclear arms and effective military. That is the role the United States should be playing: keeping a clear moral compass and destroying mass-murdering barbarians in a true alliance of civilized peoples. Millions of Muslims will rise up against their terror masters as soon as the United States signals a recovery of its moral center.

Israel defends itself like a pit bull. It will use nuclear weapons if it must. The Iranians know that, and in spite of all their glorification of martyrdom, they will not risk Israel’s nuclear retaliation until they have overwhelming superiority.

Instead, they are going after Sunni apostates against the will of Allah, especially the Saudis and Egypt.

What is emerging today is a ferocious Shi’a-Sunni civil war, with Israel taking the side of Egypt and Saudi Arabia. Obama is supporting truly evil forces, those who kill women and children for the fun of it, like Boko Haram, the Islamofascist monsters who are now trying to conquer Nigeria.

The Iranians now surround Israel on two of three sides, and ISIS is attacking in the Sinai Desert. But if you look at the map, you can see the real strategic targets of the Iranians, now with Obama’s collusion. Iran’s real target is the two holy cities of Mecca and Medina. Those were Ayatollah Khomeini’s real target when he tried to stir up a rebellion against the Saudis during the Hajj, when Iranian pilgrims attacked the Saudis forty years ago. The Islamic “Republic” is a war theocracy, and its aims are always conquest of the infidels and the apostates. To Iran, Saudi Arabia is worse than Israel and the West, since the Sunni Muslims abandoned the true way of Allah.

(Naturally, ISIS and the Saudis say the same thing about the Iranians.)

So even Israel and America are only secondary targets. Each half of the Muslim world considers the other half to be betraying Allah. Once the Iranians control Mecca and Medina, they believe that all Muslims will fall under their control.

From the actions of this administration, Obama agrees with them.