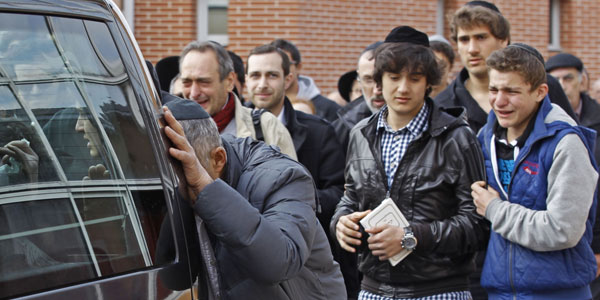 With an estimated 550,000 members, France currently has Europe’s largest Jewish community and ranks third in the world behind Israel and the United States. The perception that most are native, well-off French Jews of Ashkenazi descent is wrong, as much of that community was either wiped out, or fled during the Holocaust.

Rather, three-quarters of France’s Jews today are of Sephardic origin from North Africa. Their families moved to the safety of France mostly during the unstable period between Israel’s rebirth in 1948 and Algeria’s independence in 1962; as persecution and violence uprooted the once-huge Jewish communities in these former French possessions across the Mediterranean.

Many came to France alongside Muslim refugees fleeing conflict and harassment in the same countries of Algeria, Morocco, and Tunisia. These Jewish and Muslim refugees often settled in the same poor neighborhoods of Paris, Marseille, and elsewhere, and much of the recent upsurge of anti-Semitic violence in France has occurred in these struggling “immigrant” towns.

While the Hyper Cacherr market attack has left all French Jews uneasy, fear runs deepest among those of North African origin, due to their proximity to large Muslim neighborhoods and their haunting memories of forced exile.

As with other European nations, France has a long history of anti-Semitism, including its fair share of blood libels, book burnings, forced conversions, and expulsions. And even during the Enlightenment, one of its champions – the French philosopher Voltaire – wrote of the Jews: “You have surpassed all nations in impertinent fables, in bad conduct, and in barbarism. You deserve to be punished, for this is your destiny.”

When the French emancipation of the 1800s promised “Liberté, Égalité, Fraternité,” the Jews of France thought they would finally find acceptance. But then the Dreyfus Affair erupted in 1894 with its trumped-up charges against a Jewish military officer. The rigged court martial of Captain Alfred Dreyfus in Paris, was witnessed by Viennese journalist Theodor Herzl, prompting him to write a book calling for Jewish statehood, which later spawned the Zionist movement.

The vestiges of classical European anti- Semitism are still present among native French, which is often reflected in the media’s critical coverage of Israel and the government’s traditional pro-Arab stand in the post-De Gaulle era. But much of the anti-Semitic violence in France today is driven by youth gangs in the country’s swelling Muslim immigrant community – the largest in Europe.

In 2001, the Second Palestinian Intifada sparked firestorms of Muslim youth violence against Jews in France that continue to smolder and reignite during times of conflict in the Middle East. During this summer’s rocket war in Gaza, for instance, synagogues came under siege, kosher shops were burned, and Jews were attacked in the streets.

Other prominent anti-Semitic incidents in recent years include:

The shooting spree by a Muslim terrorist at a Jewish day school in Toulouse in 2012, which left a teacher and three students dead;

The shooting attack last May outside the Jewish museum in Brussels that claimed four lives and was carried out by a French Muslim terrorist who had returned from fighting in Syria; and

The shockingly brutal kidnapping, torture, and slaying of French Jew, Ilan Halimi in 2006 by a gang of Muslim criminals.

The biggest concern now is over the increasing number of radicalized Muslims being recruited by jihadist groups to fight in the Middle East and then returning to France to carry out attacks against “soft” Jewish targets. The jihadist attacks on the Charlie Hebdo magazine offices and the kosher supermarket in Paris, are evidence that the threats to French Jews are only getting worse.