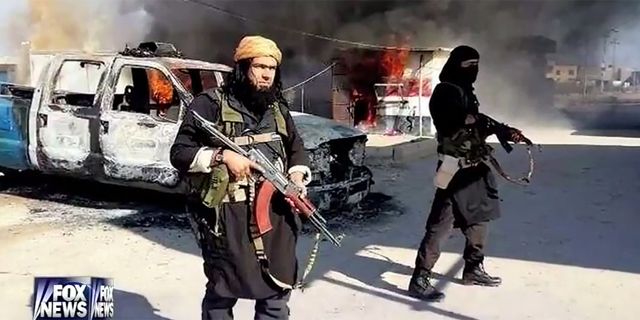 Credo quia absurdum. “I believe because it is absurd.” Plainly, a Palestinian state – any Palestinian state – would directly benefit anti-American terrorists. Why, then, does the President of the United States effectively support a prospectively Jihadist “Palestine,” and simultaneously make war against Islamic State (ISIS)?

In Washington, the issues of Palestinian statehood and ISIS aggressions are normally regarded as unrelated. Nonetheless, it is worth considering that these security issues are actually linked, and that any creation of Palestine would have substantially corrosive implications for America’s still-unsteady struggle against ISIS. Ultimately, the most conspicuous victim of Palestine would be Israel, an indispensable U.S. ally in the Middle East.

“I believe because it is absurd.” Even while dealing with multiple and increasingly virulent Jihadist enemies,most notably ISIS, U.S. President Barack Obama accepts the presumed benefits of a Palestinian state. Oddly, and perhaps without any intended bias against Israel’s reciprocal security needs, Mr. Obama remains convinced that there is some discernible symmetry between Israeli and Palestinian claims for statehood. Ignoring the entire history of a non-state Palestine, from the 400-year rule of the Ottoman Turks, to the Balfour Declaration (1917), to the San Remo Conference (1920), to the Treaty of Sèvres (1922), to the British Mandate (1922), and beyond, to the U.N. Charter, the president’s contradictory convictions have been sorely under-researched, and grimly ironic.

Always, in such matters, truth is exculpatory. At some point, if they can somehow manage to stop abducting and murdering each other – and all the while staving off the even more lascivious killers of al-Qaeda and IS – the Palestinian Authority and Hamas will advance a joint plan for Palestinian sovereignty in the West Bank (Judea/Samaria), Gaza, and East Jerusalem. This generally anticipated announcement, while contrary to all codified expectations of Oslo Agreement obligations to Israel, would still elicit the enthusiastic corroboration of President Obama’s “Road Map.”

Although it would likely be overlooked by the White House, any such “cartographic” support would cynically mock authoritative international law.

In essence, it would undercut global legal order far beyond even its prima facie Oslo Agreement violations.

“I believe because it is absurd.” Any such “Road Map” support would be at odds with the governing treaty on statehood under international law, a “constitutive” pact known formally as The Convention on the Rights and Duties of States (1934). Significantly, because this vital fact of law is neither widely known nor meaningfully understood, authentic conferral of statehood is always independent of UN actions, or of recognition by any existing states.

Of course, the main problem here, for both the United States and Israel, does not concern pertinent international law, or even the “Montevideo Convention,” as it is better known. Rather, it concerns the de facto implementation of Palestinian statehood.

Why? The reasons are not hard to fathom. Following Israel’s latest self-defense war, an obligatory conflict in Gaza waged as Operation Protective Edge, it should be apparent that any state of Palestine could cheerfully inflict incessant aggressions upon Israel, including even an orchestrated barrage of incursions aimed at further territorial extensions.

One should recall, in this connection, that the Palestine Liberation Organization (PLO) was formed in 1964, three years before there were any “occupied territories.” What, precisely, was PLO (now PA) seeking to “liberate?” The answer, of course, is all of Israel.

Predictably, in expanding beyond its more-or-less properly designated state boundaries, such territorial extensions would be justified in order to ensure Palestine’s legal “equality” with Israel. After all, under international law, “sovereign equality” is always treated as a fundamental or “peremptory” norm. Here, however, Palestinian applications of this rule would represent little more than a jurisprudential manipulation or contrivance of “lawfare.”

Truth is exculpatory. Palestinian plans for an Israeli “final solution” are unhidden. Even now, irredentist Palestinian intentions are easy to decipher. Already, official PA maps identify Israel as a part of Palestine. On these maps, there is never any acknowledgment of “sovereign equality.” In this murderous cartography, there is only a “one state solution.”

“I believe because it is absurd.” Any Palestinian state would have a promptly injurious impact on vital American strategic interests, and, simultaneously, on Israel’s physical survival. After Palestine, Israel, facing an even more expressly formidable “correlation of enemy forces,” would require ever-greater excursions into existential self-reliance. In turn, any such enhanced journeys would call for: (1) a more coherent and more openly disclosed nuclear strategy, one focusing comprehensively upon deterrence, preemption, and war fighting capabilities; and (2) a corresponding and interpenetrating conventional war strategy.

Technically, and in more narrowly operational military parlance, these expanded strategic obligations would entail (3) a more nuanced understanding of critical “force multipliers;” (4) a more emphatic doctrinal commitment to “escalation dominance;” and (5) a broader appreciation of certain important “synergies,” e.g., the negative interaction effects of our ongoing U.S./coalition war against is, with the ongoing results of Palestinian state violence against Israel.

A Palestinian state, any Palestinian state, would make Israel’s conventional war capabilities increasingly problematic. In response, Israel’s national command authority, among other things, would be pressured to make the country’s still-implicit nuclear deterrent appropriately less opaque. Any such a retreat from “deliberate nuclear ambiguity,” if incremental and limited, and if undertaken in coordinated conjunction with certain calibrated efforts to control escalation, could serve Israel productively, potentially, as a potent “force multiplier.”

To be sure, there are some limiting caveats. For one, ending the country’s longstanding policy of keeping its “bomb in the basement” might enhance Israel’s security for an indeterminate period, but such cessation could also heighten certain overall chances of nuclear weapons use. If, for example, Iran were allowed to go fully nuclear, which now seems assured (ongoing “negotiations” with Tehran have been silly at best), belligerent nuclear violence would not necessarily be limited to Israel and Palestine. Instead, it could take the fearsome form of an utterly unprecedented nuclear exchange.

How could such a starkly ominous scenario actually play out? Significantly, a nuclear war could arrive in Israel not only as a “bolt-from-the-blue” surprise missile attack, but also as a catastrophic outcome, intended or otherwise, of escalation. If, for example, an enemy state such as Iran were to initiate “only” conventional and/or biological attacks upon Israel, Jerusalem might then choose to respond with certain fully nuclear reprisals. Or, if this enemy state were to commence hostilities, employing solely conventional attacks upon Israel, Jerusalem’s non-nuclear reprisals might then be met, in a still palpably uncertain strategic environment, with particular enemy nuclear counterstrikes.

In any such adversarial circumstances, Israel would be compelled to demonstrate “escalation dominance.” The complex challenge, to Jerusalem, of any such needed demonstration, could be enlarged by the presence of a new state of Palestine.

With the apparent establishment of a Palestinian state, which could immediately undermine iIsrael’s necessary demonstration of escalation dominance, Jerusalem would need to raise even further the capability threshold of its relevant conventional forces. A more persuasive Israeli conventional deterrent, to the extent that it could prevent enemy state conventional and/or biological attacks in the first place, would then be required to reduce Israel’s now plausibly expanded risk of exposure to outright nuclear war.

After Palestine, the area’s “correlation of forces” would become markedly less favorable to Israel. Now, the only credible way for Israel to consistently deter large-scale conventional attacks would be to maintain aptly visible and substantially large-scale conventional force capabilities. Those enemy states contemplating first-strike attacks upon Israel using chemical and/or biological weapons would expectedly take most seriously Israel’s nuclear deterrent. Whether or not this Israeli nuclear deterrent had remained entirely or partially undisclosed, could also meaningfully affect Jerusalem’s deterrent credibility.

In essence, a sufficiently strong conventional capability is always needed by Israel to deter or preempt conventional attacks, enemy aggressions that could lead, via escalation, to an unconventional war. By definition, President Obama’s Road Map, if faithfully followed, would further impair Israel’s already-minimal strategic depth, and, if duly recognized by enemy states, Israel’s associated capacity to wage a conventional war. These key calculations should now be capably evaluated in Washington, as well as in Jerusalem, not only for Israel’s sake,but also because a Palestinian state would quickly become receptive to more steadily-expanding Jihadist preparations for anti-American terror.

These preparations could include even WMD terror.

“I believe because it is absurd.” There is something more. Over time, especially as is makes further military advances across the region, its growing armed forces could overrun not only Jordan, but also the core heartland of any new Palestinian state that had recently been erected in the West Bank (Judea/Samaria). This already sobering scenario could be rendered even more plausible, if Palestinian statehood had been bestowed upon a prior condition of “demilitarization.”

In this deeply ironic scenario, one wherein grave harms to Israel were associated with measures that had originally been enacted to protect the Jewish State, the principal security problem of Palestine would lie in unanticipated directions. For both Israel and the United States, this problem would reside not merely in the expectedly common and mutually reinforcing Jihadist cultures of is and Palestine, but also in the now literal fusion of their pertinent terrorist institutions and infrastructures. To be sure, any such coercively-created fusion might actually be unwelcome to PA, Fatah, Hamas, and the entire Palestinian side, but, strategically, at least, any such objections would prove immaterial.

Even if Palestinian statehood had somehow been claimed without any contingent “demilitarization,” is would still likely have little notable difficulty in overcoming any armed Palestinian resistance. In brief, the armies of “Palestine” would quickly be shredded by the armies of ISIS.

To conclude with PM Netanyahu’s apt metaphor, Palestine and ISIS represent different branches of the same Islamist tree. Under certain circumstances, moreover, these branches could become interwoven, interpenetrating, and literally indistinguishable. With such an informed understanding in mind, there remains no conceivably rational or ethical reason to support Palestinian statehood, while simultaneously opposing ISIS.

LOUIS RENÉ BERES (Ph.D., Princeton, 1971) lectures and publishes widely on Israeli security matters. He is the author of ten major books, and several hundred journal articles, on international relations and international law. The chair of Project Daniel (Israel, 2003), his popular writings on war and terrorism can be found in such publications as Israel National News; The Jerusalem Post; The New York Times; The Washington Times; Christian Science Monitor; The Atlantic; U.S. News & World Report; and Oxford University Press Blog. Professor Beres was born in Zürich, Switzerland, on August 31, 1945.