Laughing at the Holocaust 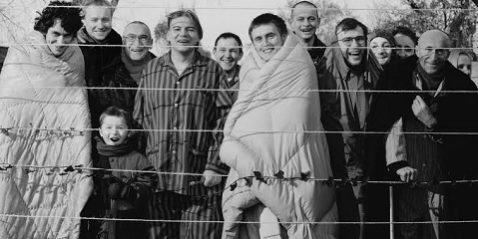 On February 7th, 2015, a peculiar exhibition has been opened at the Tartu Art Museum in Estonia, – My Poland: Remembering and Forgetting. The exhibition which is set to last until the end of March, is declared by the organisers as a commemoration of the 70th anniversary of the liberation of the concentration camps and the end of the Second World War. Importantly, the exhibition has been supported and financed by the Estonian Culture Fund and the Estonian Ministry of Culture.

Another work of insult with a big “I”, are depicting classic Los-Angeles landscape with a giant HOLOCAUST letters on the place of HOLLYWOOD one; video where naked people are playing tag against the background of a gas chamber; video in which an elderly man enters a tattoo salon asking ‘to renew’ his tattoo which is a concentration camp’ number on his hand. All exhibits of this outrage are of the same character – boorish, arrogant, intentionally insulting mockery of the Holocaust in genres of video, photography, comics and the other garbage produced and curated by humanoids from Poland and Estonia.

I believe that their names should be known widely in connection with their intentional deed. They are: Zbigniew Libera, Joanna Rajkowska, John Smith (Marko Mäetamm and Kaido Ole), Wilhelm Sasnal, Artur Żmijewski and Yael Bartana. Most of them are Poles, two of them are Estonians, and one, Yael Bartana, is Israeli living in Berlin and representing Poland in a number of international exhibitions.

Zbignew Libera who is the author of the photograph Residents, the front-piece of the exhibition, has been known previously for his Lego model of a concentration camp, and the other scandalous lows of the exercises of the contemporary so-called art. Marko Mäetamn is teaching in that Academy. Artur Zmijewski is the author of the Playing the Tag video which has been officially forbidden in Germany as insulting and inciting the Nazism.

All of these arrogant creatures are enjoying description of ‘a controversial artist’. What they produce – and what museum’s cleaners, sane people, are regularly throwing in a garbage bins genuinely taken it for a garbage – has as much to do with art, as their messages has to do with humanity, morality, conscience, education, knowledge, common sense, and the other features which defines a human being from a humanoid.

The curator of this outrage is 24- years old Rael Artel who has become the director of the Tartu Art museum in 2013 being an independent curator before. Everybody in the art world knows what ‘independent curator’ means in real life. Translation: nobody. But it does tell on those who are governing culture in Estonia and promoting such creatures to directorship of their museums.

On the so-called museum’s site there are a couple of writings regarding the exhibition. In the first cheery communiqué, they are telling about ‘outstanding samples of the international contemporary art’, noting that almost all artists are participants of the Venice Bienalle – which sounds as self-proof mantra for 24-year old ‘independent curator’, and are happily listing ‘only some of the strategies’ the artists presented applying to their interpretation of the Holocaust: “humour, irony, marketing of history’; this is applied in order “to compensate for the injustice” and for “creating an easier talk on Holocaust”.

Why not to Legolised the Holocaust entirely? It is so funny, and so easy, for brainless, heartless, and sickly anti-Semitic ones, as well. The Holocaust is called “an unpleasant topic” in the official press-release of that so-called museum. In another communication, the museum characterises the Holocaust as “unpleasant smells of history of matters”.

The museum also brands that the one of the key-exhibits, extremely sick Playing a Tag video is prohibited in Germany. And they add proudly: “There are many other scandalised and controversial works at the exhibition”.

To attract the public, they have issued a warning there: “Attention: exhibition works of art may be disruptive”.

After initial outrage that the exhibition has caused in Estonia, among some circles there, not on a national, or official level as yet, the museum decided to post an explanation of their mega-insult. In rather short text, the general phrases from the initial press-release had been repeated, speculating in a clearly ambiguous way on modern-day ‘xenophobia in France, Ukraine and Middle East’, nothing on Jewish and terrorists there, of course. The organisers stated that they did not intent “to make a cheap scandal”. Indeed, they were not; the costs of that so-called exhibition are quite high.

There has been quite an effort: to choose, to pick up, to collect, to transport, to insure, to mount, to publicize this collection of sick, malicious outrage, and to finance it all, every stage of it – by the public money, by the way.

There is a process for approving the organizing of such state-supported exhibitions, and here lies the core question on the way that Estonia commemorates the 70th anniversary of the liberation of the camps and the end of the Second World War. There were adults who were aware with the exhibition’s concept and its content, and those officials, all of them, are to be called responsible for the massive insult of the victims of the Holocaust and their families. There is also a complete ground for a collective class-action against the initiators and executors of such public organised demonstration of mockery on the Holocaust, and such action is been under consideration currently.

The very fact that such disgust, such cheapening of the memory of millions could become possible is yet another sign of where we all did find out ourselves nowadays, when open, violent, blatant, shameless anti-Semitism has not become just accepted as a routine, but has become a fashion.

The Jewish Community of Estonia has sent their official letter protesting the exhibition to the president of Estonia and the country’s leadership including its prime-minister, minister of culture, and members of the parliament.
The Estonian Members of the European Parliament has been also addressed on the issue. We all would be very interested to hear on the reaction of the leaders of the country and its high officials.

Yad Vashem and the other relevant leading international institutions has been informed on the scandal in Estonia.

The American National Coalition Supporting EuroAsian Jewry is looking into the matter being alerted by many people world-wide, as well as the Los-Angeles Simon Wiesenthal Centre.

So far, this show of mockery has been the only public official commemoration of the 70th anniversaries of the dates connected to the liberation of the concentration camps, the end of the World War II, the International Holocaust and Remembrance Day in Estonia. Or maybe, in the light of the attitude demonstrated by the headless and immoral little monsters supported by the state of Estonia, we should expect a nice annual celebrations of Estonia’s declaration of becoming an ‘judenfrei’ state, the first of all countries under the Nazi coalition, at the Wannsee Conference, on 20th January 1942?.. In a way, they just did precisely that.

Dr Inna Rogatchi is the writer, film maker and the president of The Rogatchi Foundation. Her forthcoming book is Dark Stars, Wise Hearts: Personal Reflections on the Holocaust in the Modern Times; her film The Lessons of Survival will be having its national Australian, French and American premiers in Spring and Summer 2015.