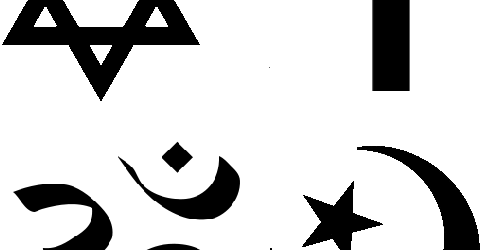 How can people continue to insist – in the face of the recent wave of awful massacres, inhumane terrorist attacks etc that have without exception been perpetrated in the name of Allah and ISLAM – that the religion of ISLAM is itself peaceful and that it is only ‘radical’ or ‘jihadist’ ISLAM that is the problem?

What do these people do with the more than 50 wars Mohammed fought to spread his faith and to establish its path? What do they do with the numerous Quranic verses extolling jihad and all manner of brutality against “the infidels” in Allah’s name? How can the world continue to ignore – simply out of a fear of being found politically incorrect – that from its very founding ISLAM has contained and still contains embedded in it a not inconsiderable amount of violence?

Did Jesus initiate even one war? Even when Peter, one of His closest friends and disciples, cut off Malchus’ ear in the Garden of Gethsemane in defense of his Lord, Jesus rebuked him and healed and restored the ear.

What an enormous difference there is, then, between Jesus and Mohammed. This is so clear – how is it that this is omitted by nearly all those commenting on ISLAM’s definitive character?

Fight those who believe not in Allah nor the last day, nor hold that which hath been forbidden by Allah and His Messenger , nor acknowledge the religion of truth , from among the people of the book until they pay the Jezia with willing submission, and feel themselves subdued. (Surat Al-Tawbah 9:29)

And fight them on until there is no more sedition (literal translation) and religion becomes Allah’s in its entirety. (Surat Al-Anfal 8:39)

Anis Shorrosh, himself an Arab Palestinian Christian, writes in his book ISLAM REVEALED the following:

Muhammad gives himself a self-serving, so-called divine order to fight. This is perhaps the basis for calling Islam “the religion of the sword.” Surat al-Nisa (Women) 4:84 says:

So fight (O Muhammad) in the way of Allah – Thou art not taxed (with the responsibility for anyone) except of thyself – and urge on the believers. Peradventure Allah will restrain the might of those who disbelieve. Allah is stronger in might and stronger in inflicting punishment.

Finally, here is another gruesome order given by Allah through Muhammad according to Surat al-Ma’idah (Table Spread) 5:33:

The only reward of those who make war upon Allah and His messenger and strive after corruption in the land will be that they will be killed or crucified, or have their hands and feet on alternate sides cut off, or will be expelled out of the land. Such will be their degradation in the world, and in the Hereafter theirs will be an awful doom.

Thus ISLAM spread by way of the sword. As Hebrew University Professor in Islamic Studies Moshe Sharon remarked: “ISLAM had the sword before it had the Quran.”

With this sword Moslems occupied many countries, terrorizing their populations into embracing to the teachings of ISLAM.

With this violence ISLAM advanced as far as Tours and Poitiers in Southern France, where Charles Martel stopped it. To the east it later advanced to the very gates of Vienna.

Of the 12 Jewish apostles, eleven died martyrs’ deaths (John was put into boiling oil, but survived). These men were not called ‘martyrs’ because they tried to kill or massacre others. On the contrary, they were killed because they truly were men of peace, whose only crime was that they preached – unarmed – a Gospel of true peace! As the Epistle to the Hebrews relates, they “were tortured, … had trial of mockings and scourgings, yes, and of chains and imprisonment. They were stoned, they were sawn in two, were tempted, were slain with the sword.” (Hebrews 11:35-37) Note, they did not do these horrible things to others, as today’s Jihadists do. They were the recipients of these things.

And people – even the former President George W. Bush – still assert that ISLAM is a peaceful religion!?