Why is Hamas smiling? 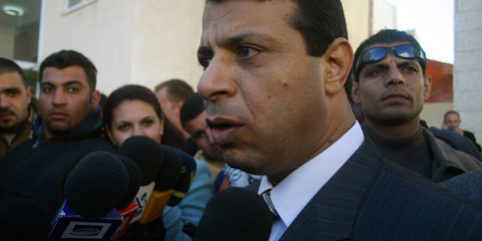 The Palestinian Fatah faction, whose leaders are supposed to be working toward preparing Palestinians for an independent Palestinian state, is currently embroiled in a bitter and violent power struggle between Palestinian Authority President Mahmoud Abbas and his major rival, Mohamed Dahlan.

This is a power struggle, however, that casts doubts on Fatah’s preparedness to establish a Palestinian state in the West Bank, Gaza Strip and east Jerusalem.

The Fatah infighting is not new, as Abbas and Dahlan, a former PA security commander in the Gaza Strip, have been waging war against each other for the past four years.
Abbas believes that Dahlan, who is currently based in the United Arab Emirates, has long been plotting to replace him as president of the Palestinian Authority. Abbas has taken a number of measures to undermine Dahlan, including having him expelled from Fatah.

Abbas has also accused Dahlan of financial embezzlement and murder – charges that the latter has vehemently denied.

But this is the first time that the dispute between the two men has spilled over into violence. In the past few weeks, the streets of the Gaza Strip have become scenes of violent clashes between supporters of Abbas and Dahlan, much to the delight of Hamas.

The latest crisis began when Abbas decided to cut off the salaries of some 250 Fatah officials in the Gaza Strip who he suspects are affiliated with Dahlan.

In response, Dahlan’s men went on a rampage, torching cars and institutions belonging to Abbas loyalists in the Gaza Strip. One of the institutions targeted by Dahlan’s men is the Society for Families of Prisoners and Martyrs, which has been forced to close down after its offices were set on fire in Gaza City.

Dahlan’s men also assaulted a number of senior Fatah officials closely associated with Abbas. One of them, Mohamed al-Nahhal, was moderately injured during an assault at a physician’s conference, in a hotel in Gaza City.

The violence has forced Fatah to suspend all its activities in the Gaza Strip — again, much to the delight of Hamas.

Some Abbas loyalists are convinced that Dahlan and his supporters are working in coordination with Hamas.

Osama Qawassmeh, a Fatah spokesman affiliated with Abbas, said that Hamas was working hard to “encourage” Dahlan’s men to attack their rivals. He also claimed that Dahlan has improved his relations with Hamas by channeling funds to the Gaza Strip.

Following the recent spate of attacks, Abbas loyalists in the Gaza Strip have gone on the offensive by threatening to “eliminate” Dahlan and his “gangs.”

A leaflet, issued by a hitherto unknown pro-Abbas group called Protectors of Legitimacy, threatened to kill 80 Dahlan supporters. The group published the names of the supporters, claiming they worked for Israel.

“Your threats will not intimidate us,” the group said. “You are beginning to play with fire. But we are made of fire, which will burn you. The language of dialogue with you has ended and as of today we will start talking to you with the language of weapons and skull-breaking.”

The violent events of the past few weeks are yet another sign of Fatah’s failure to get its act together, especially in the aftermath of its defeat to Hamas in the January 2006 parliamentary elections.

Over the past few years, Abbas has repeatedly declared that there will never be a Palestinian state without the Gaza Strip.

However, the internecine strife among the Fatah leadership, as well as the continued power struggle between Abbas and Hamas, mean that the chances of creating a Palestinian state while he is still in power are non-existent. If in the past Abbas was unable to visit the Gaza Strip because of Hamas, now he knows that many of his former Fatah supporters have also turned against him.

Under the current circumstances, there is not much that Abbas could do other than remain in the West Bank, where he feels safer, largely thanks to the presence of the Israel Defense Forces there.