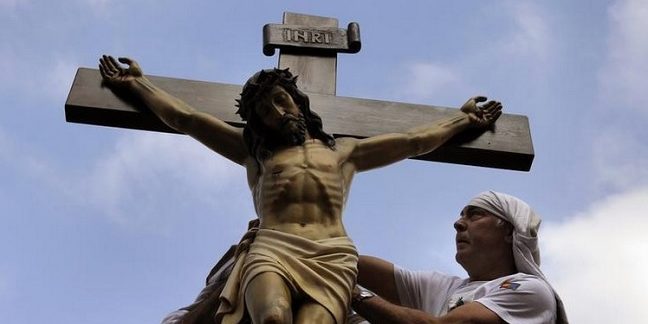 Just as he does every December, Palestinian Authority President Mahmoud Abbas, along with other PA officials, made the Christmastime claim that Jesus Christ was a Palestinian, rather than a Judean.

“We celebrate the birth of Jesus, a Palestinian messenger of love, justice and peace, which has guided millions from the moment that his message came out from a small grotto in Bethlehem over 2000 years ago,” Abbas said in his annual holiday message. “His message resonates among all of those who are seeking justice and among our people who have been the guardians of the holy sites for generations. It resonates in our prayers for our people in Gaza.”

Abbas cited Jesus’s peaceful message as an example to follow, especially in terms of Israeli-Palestinian relations, and many Arab Christians used the holiday to promote the message of peace. The theme of the Christmas Eve celebration in the West Bank this year was “All I Want for Christmas in Justice.

“Jesus’ message resonates in our prayers for our people in our capital Jerusalem, who continue to resist the Israeli attempts to turn the city into an exclusive Jewish place,” Abbas stressed. “The mosques and the churches of Jerusalem will continue to remind the world of the Palestinian, Arab, and Christian and Muslim identity of the city. Justice means ending the Israeli occupation of East Jerusalem, an integral part of the State of Palestine on the basis of the 1967 border.”

Mahmoud Al-Habbash, the Supreme Shari’ah Judge and Mahmoud Abbas’ Adviser on Religious and Islamic Affairs joined the conversation, expressing the close ties between Palestine and the birth of Jesus CHrist.

“Christmas is also a Palestinian holiday, because Jesus, peace be upon him, was Palestinian. He was born in Palestine; lived and was sent to Palestine,” Al-Habbash said. “Therefore, Christmas has a special Palestinian flavor.'”

In the new testament, text defines Jesus as a Jewish resident of Judea. The Roman Empire changed the name of “Judea” to “Palestine” one hundred years after Jesus’s death.