When Does Pro-Palestinian Advocacy Cross the Line into Anti-Semitism? 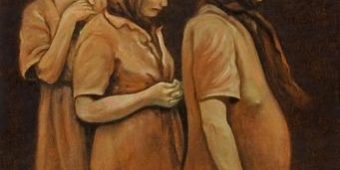 Any government of sinful human beings in our fallen world is always in need of constructive criticism for its imperfections, some of which are much more dramatic than others.

So of course, not all criticism of the Israeli government amounts to anti-Semitism. Nor does simply disagreeing with a particular U.S. government policy make one “anti-American.” And however vehemently some liberal partisans of part of our United Methodist Church’s denominational establishment may try to throw this accusation at IRD/UMAction and like-minded reformers, any criticism of a UMC general agency does not automatically make the critic “against the United Methodist Church.”

But when does singling out the world’s lone Jewish state for opposition cross the line into demonstrating an irrational animus against this particular people group?

A recent conference sponsored by the UMC General Board of Global Ministries (GBGM) and hosted at Mike Slaughter’s Ginghamsburg United Methodist Church rather dangerously pushed the envelope.

But is this enough?

It would seem reasonable to suggest four specific criteria that would make any particular rhetoric at least begin to cross the line from targeted criticism of specific leaders to anti-Semitism, or for that matter, any sort of collective animus against a particular people group:

Two long-prominent themes justifying anti-Semitic repression have been the accusations that Jews are all financially greedy and that they secretly control the government.

Plenary speaker Alex Awad, a Baptist pastor in Bethlehem supported by GBGM, at one point suggested that Jewish Israeli behavior in the conflict was indeed driven by financial greed, declaring, “We need to make occupation no longer profitable.” He also claimed that the U.S. Congress “is an occupied Israeli territory.”

2. Legitimization of indiscriminate violence against members of the people group.

Thankfully, I heard no one at this conference explicitly advocate violence. At several points, the word “non-violent” was a prominent modifier of the sort of resistance to Israel for which speakers was calling.

But were conference speakers of one mind that terrorism indiscriminately directed against Jewish/Israeli civilians is completely unjustified?

The answer I heard at this conference was disturbingly far from crystal-clear.

Other than a somewhat weak statement from Lynn Hybels, not one conference speaker, in my observation, was willing to very explicitly and unambiguously denounce the terrorist violence of Hamas as a serious problem, even when the issue came up. Awad actually declared that “it is not Hamas’s rockets,” and “it is not Hamas’s underground tunnels” that were responsible for “why we don’t have peace right now.” Instead, he insisted that the blame was all on the Jewish state and its American supporters. Zoughbi claimed: “the issue is not Hamas – Israel is against the Palestinian people!”

Such other actors as Hezbollah, Islamic Jihad, and foreign sponsors of anti-Israel terror did not get a single mention.

During a Q+A session, Mr. Zoughbi strikingly could not identify a single portrayal of Israelis in the Palestinian media he thought was worth criticizing. Even though there is an extensively documented thread of encouraging of hatred and murderous violence against all Jews and Israelis in Palestinian media, even in children’s programming!

The conference’s party line on anti-Israel terrorism could be fairly summarized as: nothing to see here. Or at least nothing that counts as a legitimate concern.

Mike Slaughter and other speakers rather blanketly and over-simplistically described the Jewish people of Israel as “the oppressor.” Now for the record, I do not believe that the Rev. Slaughter wants to see more anti-Israel terror any more than I do.

But hosting such a conference that promotes much of the basic, skewed narrative used to justify anti-Israel terror, violence which is rather indiscriminately directed against members of the Jewish people group, while also pointedly refusing multiple opportunities to clearly denounce this terror as an inexcusable evil that needs to be fought, rather unhelpfully contributes towards rationalization and legitimization of such anti-Semitic violence.

Workshop leader Philip Farah went a step further, oddly defending the conference’s rather questionable agenda of boycotts, divestment, and sanctions targeting the world’s lone Jewish state by asserting that the only alternative for Palestinians “with the boot of occupation on neck” was to murder Israelis. (Taking Israeli security concerns seriously, working with Israelis to fight terrorist attacks, and undermining extremist and hateful Islamicist ideologies, thus helping establish the trust and stability needed to build a truly just and stable peace, was one alternative this conference steered clear of.)

3. Callous dismissal of a people group’s life-or-death concerns beyond the limits of reason or facts.

Throughout the conference, with the brief and very partial exception of the speech by Lynn Hybels, Israeli concerns about security were alternately ignored, ridiculed and dismissed.

No one interested in understanding the truth of this complex geo-political conflict could ignore such basic facts as the dramatic history of so many oppressed Jews fleeing other Middle Eastern nations for Israel, the rather recent history of aggressive hostility of some of Israel’s neighbors, and the Jewish state’s repeated efforts to sacrifice land for the sake of peace. But such facts that may have complicated the narrative of demonizing the nation-state of Jewish people were carefully excluded from this conference.

Furthermore, the party line of the conference was that somehow the only problem was “the occupation.” But the endgame these activists had in mind was never clearly spelled out. It is hardly reasonable to expect that peace and harmony would automatically break out if Israel just suddenly completely withdrew and granted full Fatah/Hamas control to the West Bank and Gaza. And it is wildly unreasonable to expect Israel to suddenly grant complete, unqualified independence to an at least partially Hamas-run Palestinian state before some of this new nation’s leaders renounced their stated commitment to the Jewish state’s destruction.

Furthermore, United Methodist pensions managers pointed out the lack of moral consistency that would be involved in singling out the Jewish state for divestment while ignoring greater social concerns with other investments. But this did not at all phase the conference’s pro-divestment activists. That’s simply not rational.

Several years ago, Jewish leaders rightly decried unqualified criticism of Israel’s security fence as “functionally anti-Semitic.” Since the fence was credited with saving countless Jewish lives from continuing waves of suicide bombers, these Jewish leaders argued it was functionally anti-Semitic to simply attack this effective measure of protecting Jewish lives without even suggesting an alternative.

By that same standard, what would one call the Ginghamsburg conference’s broad, often irrational criticism of Israeli efforts to defend Jewish (and other Israeli) lives without suggesting alternative means of directly combating ongoing terrorist attacks, let alone the conference’s complete dismissal of Israelis’ concern for the lives of their families?

4. Open support for collective punishment against members of the people group.

Another workshop speaker, Susan Hoeder, defined BDS as “boycotting all things Israeli,” while describing it as a parallel path of the same agenda as more limited divestment from specific companies (like Caterpillar, Hewlett-Packard, and Motorola).

At one point, attendees were instructed to discuss at their tables how to best promote the BDS movement, with apparently presumed consensus behind this rather radical agenda.

Thus, a central goal of this Ginghamsburg conference was promoting an agenda of collectively punishing an entire people group, citizens of the world’s lone Jewish state.