Pope Says Christians in Iraq Suffering ‘Just Like the Jews’ 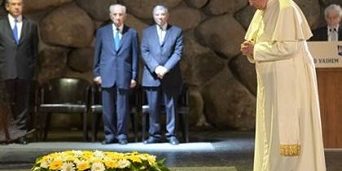 Pope Francis has warned that Christians in Iraq and Syria face persecution just as Jews have in the past, a prominent American Jewish leader said Thursday.

“You have suffered, now it’s our turn,” World Jewish Congress president Ronald Lauder said the pope told him in a private audience.

Francis also repeated his recent warning that the global rash of religious extremism may have sparked “a third world war”, said Lauder, who met with the Roman Catholic leader late Wednesday at the Vatican.

Lauder, a prominent philanthropist and defender of Jewish cultural interests, denounced the international response to the suffering of Christians at the hands of extremists from the Islamic State (IS) and other groups.

“First the Jews suffered savage attacks, and the world remained in silence. Now it is the Christians who are being annihilated, and once more the world says little. Why does the world not react?” he said.

Lauder said reports described Islamic terrorists as tagging Christian houses with the letter N for “Nassarah” – a term used for Christians in the Koran – and said it was “no different from the yellow star of David which the Nazis obliged Jews to wear to separate them from the others.”

Christians, as well as other non-Sunni Muslim communities such as Yazidis and Shia Muslims, have been brutalized since IS’s bloody rampage through Iraq and Syria began, in what Amnesty International has termed as ethnic-cleansing on a ‘historic scale’.