One big step backwards for mankind 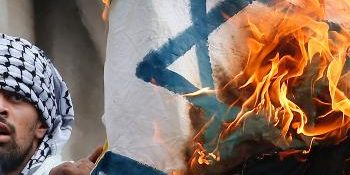 For the past 27 days, Israel is once again fighting and sacrificing its best and brightest, defending Israel’s citizens against Hamas, a fanatical enemy. The war in Gaza, known as “Operation Protective Edge” has evolved into a watershed event in regard to Israel’s standing in the world and no less so for Jews throughout the world. Far away from Gaza’s front lines, a parallel battle is being waged in which Jews and Israel are viewed as two sides of the same coin countering a tsunami of irrational hatred, being held to impossible standards, denying Israel the right to defend herself. Jews throughout the world whether in the streets of Europe or the streets of New York are attacked verbally and are physically being denied the right of free speech to support Israel. Even Israel’s supposedly best friends have joined the orgy of Jewish hatred; they imply that they are friends of Israel and support her right of self-defense, as long as Israel doesn’t actually do anything to defend herself.

Let’s not forget that the context of this debate is a situation in which Hamas uses Palestinian Arab civilians as human shields, shelters its leaders in command centers and bunkers surrounded by civilians, stores munitions in United Nations schools and facilities as well as mosques and hospitals. While the deaths of those caught in the crossfire are tragic and regrettable, castigating Israeli forces for not doing enough and asserting that Israel is forbidden from firing on any target where a civilian might be is simply granting Hamas complete impunity. Rather than shamelessly accusing Israel of genocide and putting Israel on the stand for war crimes, the truth is that Israel and the Israel Defense Forces should be given the recognition for fighting Hamas with unimaginable restraint.

Islamic organizations have joined hands with anti-Semitic groups in London, Paris, Brussels, Los Angeles, Houston, and in New York marching hand in hand conveying a doubled-edge message; as for Israel, there is nothing Israel can do short of national suicide to stop their condemnation of Israel’s actions, and as for Jews, they imply that Jews who support the State of Israel are fair game. The general trend in these demonstrations against Israel is the equalization of Israel, Zionism, and Jews to Nazism. We hear it everywhere, Jews and Israel being compared to the actions of Nazi’s and to Hitler himself.

The violent massive pro-Palestinian demonstrations from the very onset of Operation “Protective Edge” in France and Germany, South Africa the home of where Apartheid has its origins unashamedly espousing re-virulent online anti-Semitic rhetoric, Swastikas painted on Florida synagogues, and in New York the Metropolitan Opera House insists on producing the pro-terror production “The Death of Klinghoffer” are all signs heralding a new era for Jewish communal life, and Jews are being put on notice. . The message is clear: The air is stifling and the black cloud is here to stay. It seems as if public and uninhibited hatred of Jews has gone mainstream. It seems to have become politically correct to espouse incendiary anti-Semitic lies and celebrate the invented humanity of Palestinian terrorists.
From reports emanating from all corners of Europe, the Jews of this dying continent have heard the calling and have no lingering doubts about the Islamic takeover of Europe. The Jewish communities of Europe realize that their days are numbered and that European Jewry precarious situation will get more unbearable day by day and they as a community must find a new home. These Jews, spread across communities many dating back centuries will in the coming years cease to exist.

American Jewry on the other hand, has yet to hear the wake-up call and internalize the change that has occurred during Obama’s watch. Islamic communities have grown rapidly in recent years, many of these communities have sprung up alongside existing Jewish communities in Brooklyn and Queens. These Jewish communities feel the heat and can no longer deny the creeping takeover of buildings that were once communal institutions and today house Mosques and Muslim associations, in many cases are in actuality gate organizations for the recruitment of future Islamic radicals.

The eradication of European Jewry through active anti-Semitic violence in recent years fostered by massive Muslim immigration to Europe is being copied on the American continent. In the coming years this demographic change will quickly multiply and create the critical mass needed to threaten American Jewish communal life as we know it. The current Congressional impasse concerning the flooding of America’s Southern border with Mexico with millions of illegal immigrants has been a bonanza for Islamic communities. Thousands of illegal Islamic immigrants, many of them graduates of military training in Syria, Iraq, Iran, and Pakistan have used this easy route to become active members of Islamic communities throughout America. The daily demonstrations opposite the office of Fox News in mid-Manhattan is only a small example of what American Jews can expect in the near future. Yes, violent and aggressive demonstrations against a TV network who according to their first Amendment rights have done nothing illegal other than refrain from providing Hamas a public springboard for their anti-Semitic and anti-Israeli propaganda. Yes, Fox is being challenged only because they refuse to broadcast and join the anti-Jewish and anti-Israeli atmosphere so prevalent among other broadcasters.

Let there be no doubt, and I say this sadly, Islamic societies are heading backward in time. Excluding two or three oil wealthy Arab nations that are able to maintain a technologically modern society continue to suffer from the same societal malaise that has resulted in the implosion of the Middle East in recent years. Lack of human rights, lack of technological advancement, and lack of economic freedom are all the backbone of why Islamic societies are inherently failing societies. This is what will be brought to America’s shores. The brazenness and outright violence that will be waged against American Jews who support Israel’s right to self-defense is as was in Europe only the first stage of what will inevitably follow, the end of American Jewish communal life in America.

The writer, a 25-year veteran of the I.D.F., served as a field mental health officer. Prior to retiring in 2005, served as the Commander of the Central Psychiatric Military Clinic for Reserve Soldiers at Tel-Hashomer. Since retiring from active duty, he provides consultancy services to NGO’s implementing Psycho trauma and Psycho education programs to communities in the North and South of Israel. Today Ron is a strategic advisor at the Office of the Chief Foreign Envoy of Judea and Samaria    To contact: medconf@netvision.net.il