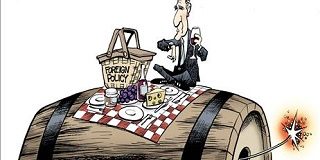 Israelis were once again left dumbfounded by the behavior of the American Administration after US President Barack Obama on Monday appeared to be using Hamas terrorism as leverage to get Israel to resume peace negotiations under Palestinian terms.

Earlier in the day, the White House was found whining to the press as US Secretary of State John Kerry once again became the recipient of a diplomatic tongue-lashing by senior Israeli officials after he proposed a Gaza ceasefire deal that some in Jerusalem described as “offensive.”

State Department spokeswoman Jen Psaki insisted that Kerry’s truce plan was consistent with an earlier proposal that Egypt had put forward and that Israel had accepted. However, the fact that the Palestinian Authority also rejected Kerry’s deal, which it said had been authored by the “Friends of Hamas,” called into question Psaki’s grasp of the details.

At any rate, Psaki complained that Israel’s manner of rejecting Kerry’s plan is “not how you treat your partners.” Not a few Israelis retorted that the same could be said of Kerry’s plan, not to mention incessant American complaining over Israeli military actions.

By the end of the day, Kerry appeared to have drawn closer to the Israeli position, suddenly declaring his support for the demand that any ceasefire lead to the disarmament of Hamas and the entire Gaza Strip.

There was still a gap between Kerry’s position and that of Prime Minister Benjamin Netanyahu, who told Israelis in a televised address that an acceptable Gaza truce must include, not lead to, Hamas’ disarmament.

And then Obama stepped in and dropped his bombshell, suggesting that he’d only press the issue of Gaza’s disarmament in the context of a final status peace agreement between Israel and the Palestinian Authority. The latest round of US-brokered peace talks broke down after the PA unilaterally sought UN recognition outside the framework of an agreement.

“The President stressed the US view that, ultimately, any lasting solution to the Israeli-Palestinian conflict must ensure the disarmament of terrorist groups and the demilitarization of Gaza,” the White House press secretary announced.

What is really angering a lot of Israelis is the fact that the demilitarization of Gaza was a primary Palestinian obligation when the so-called “Oslo Accords” were signed 20 years ago, as Israeli Intelligence Minister Yuval Steinitz has pointed out in a number of recent interviews and press briefings.

“Gaza was supposed to be totally demilitarized. That is a Palestinian commitment signed on the White House lawn 20 years ago,” Steinitz told CNN, noting that former President Bill Clinton and those involved at the time all recognized the necessity of disarming Gaza as a fundamental step toward peace.

That Obama is now using, and allowing the Palestinian Authority to use the overly exaggerated militarization of Gaza as leverage against Israel is further proof to many Israelis that the American government cannot be trusted to honor or guarantee any agreement signed by the Jewish state.