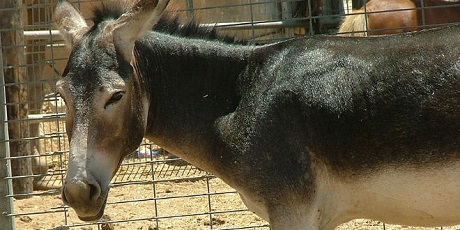 As the IDF continues its operations against Hamas terrorists in the Gaza Strip, the terror organization is turning to some unusual, and what some deem desperate, tactics against Israeli forces.

On Friday, the army confirmed that terrorists attempted to attack soldiers using a donkey laden with explosives.

Soldiers in the Rafah area, located near the Gaza-Egypt border, saw the lone donkey slowly approaching their position strapped with suspicious packages. Soldier were forced to open fire, causing the explosives to detonate.

Sadly, the donkey was killed in the incident. No injuries were sustained by soldiers.

In an army statement on the IDF blog, soldiers have been previously alerted to be on the lookout for suspicious animals being used by terrorists in Gaza.

“Up-to-date ISA intelligence alerted the IDF that terror organizations in the Gaza Strip intend to strap explosives to animals and send them in the direction of ground forces,” the statement said.

“On the night of July 18, there was at least one such attempt, in which a donkey suspiciously began to approach forces. The forces approached the donkey and it exploded at a safe distance, whereas no injuries were sustained by the IDF as a result,” the army said.

The IDF, calling the thwarted attack a “shocking incident,” expressed its regret over the death of the animal and blasted Hamas leaders as inhumane for using innocent animals as a weapon to attack Israeli soldiers.

“This cruel incident is the most recent attempt by Gaza terror organizations to make such an abominable use of animals as explosive couriers,” the IDF stated on its website.

Using animals as a means to attack soldiers is not unique to Hamas terrorists, which, according to the IDF, have been using explosive laden animals, such as donkeys, horses and dogs, to carry out suicide attacks since at least June 1995.

According to the Washington Post, Taliban forces used “suicide donkeys” to attack US and British forces in Afghanistan. In one attack about a year ago, a suicide bomber riding a donkey killed three NATO soldiers in the Wardak province.