Friendless in the Middle East 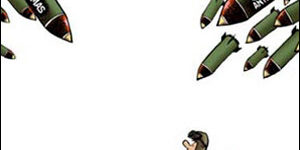 One week after the start of Israel’s “Operation Protective Edge,” also known as Hamas’ “10th of Ramadan War,” Washington is looking on helplessly. President Barack Obama offered to mediate a ceasefire last week, but the move fell on deaf ears—on both sides. Secretary of State John Kerry then made a surprise visit to Cairo on Monday in a bid for calm. Egypt soon announced a ceasefire, which was to have taken hold this morning at 9 a.m. The Israelis agreed to the terms, but Hamas balked, claiming it was never even consulted. Rockets continue to fly out of Gaza, and Israeli warships continue to pound targets in the Hamas-controlled enclave.

American diplomacy may have failed thus far, but Washington is still crucial to this conflict in at least one respect. Iron Dome, a missile defense system developed and funded with U.S. assistance, has reportedly intercepted some 90 percent of the Hamas rockets hurtling toward Israeli population centers. The system is 100 percent responsible for the fact that there have been zero Israeli fatalities since this conflict erupted—so far—despite the more than 400 rockets fired by Hamas and other militant groups into Israeli airspace. Iron Dome has allowed the Israelis to go on offense, in what has been largely been seen as a one-sided war.

The Israelis are deeply grateful to America for this remarkable technology. But, meeting with several senior Israeli officials last week, I was also struck by their equally strong desire to establish deterrence in a region that grows more dangerous by the day, and where U.S. influence is waning commensurately.

And it’s not just Israel, either. Call it a “pivot,” call it a “rebalancing”—by now, every leader in the region knows full well that the United States is trying to extricate itself from the Middle East. They know that the current Gaza conflict, the ongoing Syria slaughter and other regional upheavals are a collective nuisance to this administration, which has conspicuously failed to craft a consistent or coherent Middle East foreign policy after six years of turmoil.

U.S. credibility took a nose dive after President Obama’s Syria “red line” reversal last September—and it plummeted further in May as Kerry’s ill-timed attempt to broker a peace deal between the Palestinians and Israelis predictably collapsed. It doesn’t help that Egypt, the traditional American broker of calm between Hamas and the Israelis, has failed at its first attempt to do Washington’s bidding. But it’s also no surprise. Egypt has been drifting from Washington’s orbit ever since the administration cut funding after last year’s coup that heralded the rise of army strongman Abdel Fattah al-Sisi.

To be fair, it’s unlikely that even Sisi’s predecessor, Mohammed Morsi, the ousted Egyptian Muslim Brotherhood leader who brokered the last ceasefire with Hamas in November 2012 thanks to his longstanding ties with the group, could talk sense to Hamas right now. As Jordanian officials confirmed to me last week, Hamas is now fractured. It has at least four power centers: Gaza Strip, West Bank, external leadership and military leadership. Dealing with one, unified Hamas that was strident and intransigent was difficult enough. The splintering of Hamas makes it that much harder to negotiate.

Still, few countries in the region are prepared to cut Washington much slack. There is a growing climate of fear stemming from the U.S.-led negotiations with Iran over its illicit nuclear program. As one former high-ranking U.S. intelligence official put it to me, “the fear is that the Iranians are going to pretend to give up their nuclear program, and the U.S. is going to pretend to believe them.”

The talks, taking place now in Vienna, have unquestionably helped Iran emerge from isolation after years of international sanctions. But the six world powers (known as the P5+1) are so eager to get a nuclear deal done that they have largely ignored Tehran’s other bad behavior. The long-range rockets Hamas is firing into Israel? They are Iranian made, engineered or smuggled. The Assad regime’s slaughter of Syrians? That’s aided and abetted by Iran’s Revolutionary Guards and their Lebanese proxy, Hezbollah.

Despite this, and to the chagrin of the region’s leaders, Washington de-escalated sanctions pressure in 2013, then offered up $7 billion in sanctions relief to Iran simply for freezing its nuclear program for six months. This helped spark a modest economic recovery in Iran after a rather severe recession, thereby enhancing Iran’s leverage at the negotiating table. And there could be even more sanctions relief in store if the nuclear negotiations are extended. Meanwhile, some administration officials are reportedly tempted to cooperate with Tehran, a state sponsor of terrorism since 1984, to blunt the march of the Sunni terrorist group known as the Islamic State (alternately known as ISIL and ISIS) across Iraq.

Amidst this turmoil and moral ambiguity, some U.S. allies are now openly challenging Washington’s policies in the region. Qatar and Turkey, for example, have emerged as stalwart champions of Hamas in recent years. The head of Hamas’ politburo has been shuttling back and forth between the two countries this week, seeking guidance after years of seeking (and receiving) cash. These two countries have also been unabashedly supportive of several jihadi groups now active in Syria. Qatar, meanwhile, recently negotiated on behalf of the Taliban in the Bowe Bergdahl prisoner swap. And Turkey helped Iran evade sanctions to the tune of at least $13 billion,and perhaps more if you believe Turkish news reports that a Turkish-Iranian network did another $100 billion in illicit business transactions.

Such activities have rendered Turkey and Qatar frenemies of the United States—neither friends nor enemies. But Washington is still eager to keep them. Why? Because the White House has less and less leverage in the Middle East, and it has even fewer real friends. The absence of a strong U.S. proxy in the region to broker a ceasefire between Israel and Hamas is perhaps the most recent example of this trend.

What does this all mean? In the short term, the Gaza war may stretch on longer than anyone expected, fanning the flames of a region already burning. In the longer term, this conflict, regardless of duration, will fuel the perception that the United States has lost control of this strategically important region.

Jonathan Schanzer is vice president for research at the Foundation for Defense of Democracies. He tweets at @JSchanzer.