The bigotry of low expectations 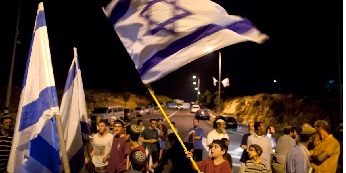 The barbaric pre-mediated murder of 16 year old Mohammed Abu Khdeir shames the Jewish people everywhere and was immediately denounced by the full spectrum of Israel’s political and religious leadership, including Israel’s Prime Minister Netanyahu, President Peres and the Chief Rabbi’s. The people of Israel expressed remorse and genuine shame that those responsible for this savage act came from among us. Just prior to this despicable act, the nation was in a period of bereavement over the discovery of our three boys, kidnapped and murdered in cold blood by Palestinian Arab terrorists. In response to the murder of Eyal Yifrah, 19, Gil-Ad Shayer, 16, and Naftali Frenkel, 16, we heard the inspiring words and comments of the families who asked of the people of Israel to remain strong and sanctify their memory by perpetuating the values they represented – unity of Am Yisrael, humility, goodness, and a sincere commitment to live a moral life. Town squares throughout the cities and of Israel were spontaneously filled with young men and women who lit memorial candles to pay final respects and reflect on their tragic death.

In response to the despicable murder of Mohammed Abu Khdeir, MK Ahmed Tibi, a veteran Arab member of the Israeli Knesset gave the green lite to the violent and criminal rioting that has broken out throughout Arab communities in Israel in recent days by stating again and again – “From now on all citizens of Israel are made responsible for the criminal assassination of Mohammed”.

During the past few days, the entrance to Arab cities and villages have become battlegrounds with thousands of young Arab rioters, many masked, combatting Police forces attempting to restore order. These Arab rioters have attacked Jews innocently driving close by with rocks, Molotov cocktails, metal bars, and destroying infrastructure such as train stations, electrical lines, leaving total destruction and havoc behind. The national leadership of the Arab communitiy in Israel has lined up unanimously and called for the Arabs of Israel to continue their violent behavior under the perverted pretense of “free speech and the right to demonstrate”.

Through the prism of Western media coverage and reactions by Obama and other political leaders from Europe, it has become painfully clear how the bigotry of low expectations of Arabs plays itself out here in the Middle East who are depicted as being incapable of measuring up to the high expectations of international morality. Prior to the murder of Mohammed Abu Khdeir, the kidnapping and murder of our three boys elicited little if any coverage in the major Western media outlets despite the outpouring of peaceful grief and unity throughout the Jewish world. It seemed as if the world accepts the legitimacy of barbaric behavior of Palestinian Arab terrorists as the necessary price we Jews must pay for not forfeiting our rights here in Israel. The use of the term “occupation” as responsible for all of the violence that is directed against Israel has always been the all-encompassing code-word that justifies the low expectations of moral behavior by Arabs. Perpetuating this myth only reinforces the continuing violence that has rocked not only Israel the past days, but all of the Middle East.

Low intensity genocide is being conducted systematically in Syria and Iraq. Christians are persecuted, hounded, and murdered throughout the Islamic countries in the Middle East and Africa. In the past three years, hundreds of thousands of Arab civilians have lost their lives throughout the Middle East due to civil wars and the violent emergence of new political leaderships in different countries. Any objective observer can look in vain and search for international outrage and indignation, but other than the occasional politically correct lip service of sympathy, condemnation is rare. This absence of moral indignation can only be explained by the perception by Western leaders and the Western media that they have no expectations that Arabs can embrace the idea of the sanctity of life, this is the true meaning behind the bigotry of low expectations.

While there is no denying that among the Jewish population there are walking time bombs that just wait for the right moment to fulfill their primal need to hurt others. They however are the margin and beyond the pale enjoying no public reinforcement of their murderous behavior. However on the Palestinian Arab side, our neighbors act in an entirely different mode. Palestinian Arab baby-killers of Jews are admired, squares are dedicated on their name, and study materials in the Arab schools glorify their mission. For those that have joined me for day tours of the Shomron, I always take the time to point out as we drive through the village of Hawarra, the pictures of suicide terrorists that are hung permanently on light poles throughout the village and represent future role models for the local population. Let’s not forget that after our three boys were kidnaped and murdered, Palestinian Arabs distributed sweets and candies in Gaza and Ramallah to express their support and joy at this murderous behavior by their brethren.

The worlds reluctance to expose and explicitly condemn the savagery so prevalent among Arab societies while focusing in with a magnifying glass on Israel demanding that she maintain an unsustainable level of respecting human rights even when it conflicts with Israel’s right to self- defense only perpetuates the racist and bigotry of low expectations of Arab society.

The author is a 25-year veteran of the Israel Defense Forces, serving as a field mental health officer.  Prior to retiring in 2005, served as the Commander of the Central Psychiatric Military Clinic for Reserve Soldiers at Tel-Hashomer. Since retiring from active duty, he has been providing consultancy services to NGO’s implementing Psycho trauma and Psycho education programs to communities throughout Israel. Today, Ron serves as the Strategic Advisor at the Office of the Chief Foreign Envoy of Judea and Samaria    To contact:  medconf@netvision.net.il