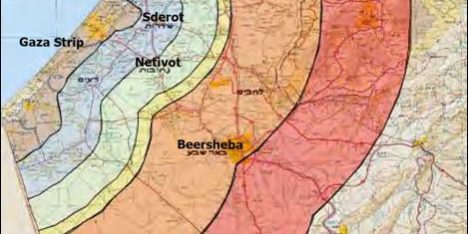 Israeli troops are poised on the edge of Gaza to invade the area if the rockets don’t stop soon. The problem is, the Hamas leaders of Gaza don’t seem to realize that the “new Samson”—Israel—is far from “eyeless” and that they have the ability to retake Gaza if they are pushed too far. In their blind hatred of Israel, Hamas leaders recklessly rush on in the vain attempt to obliterate Israel. Hamas is going to pay, but they seem to be “clueless” as to the disaster that awaits them.

In a Fourth of July speech at the US ambassador’s residence in Herzliya, Prime Minister Netanyahu said the beefed up IDF units will soon act “with power” if quiet is not restored. “The security of our citizens comes before anything,” he said. Netanyahu also condemned the murder of the Palestinian teenager, which at this point seems to be a tit-for-tat response from some radical elements in Israel. The murder has sparked riots in various places in Israel, although neither the perpetrators nor the motive are known. There is some speculation that the teen’s death might have been an “honor killing” and carried out by the Palestinian teenager’s family. Hopefully the truth will soon be revealed.

The differences are great—and they are ironic. When three Jewish teenagers are killed, Israel mourns, and searches for the perpetrators. When one Palestinian is killed, Palestinians riot. They know they have the sympathy and the backing of the Western powers, including the United States, when they riot. Of course the killing of the Palestinian boy was heinous, but the different responses are telling.

Prime Minister Bibi Netanyahu said that “murder, riots, incitement, vigilantism—have no place in our democracy.” Those democratic values differentiate Israel from its neighbors, and unites Israel with the US, Netanyahu added. As for the relationship of Israel with the US, Netanyahu said, “In both our lands, the rights of the individual are sacred, and the foremost right—without which the others cannot exist—is the right to live. And that is why we pursued the murderers of Gilad, Eyal, and Naftali—they denied them that basic right in such a cruel way,” he said.

As for the rockets from Gaza, Debkafile says, “While highly reluctant to embark on a major offensive against Hamas in its Gaza stronghold, the Israeli government could scarcely continue to avoid real action after 30 rockets were aimed on the same day, July 2, against Ashkelon, Netivot, Sdot Negev, Sderot, Kerem Shalom and the Eshkol District. Three slammed Thursday morning into houses in Sderot, causing heavy damage but no casualties. The IDF clearly expects the Gaza missile barrage to widen out from targets in southern Israel to towns farther north.”

If Gaza leaders think this is the time to get rid of Israel (no doubt they are encouraged by the success of ISIS), they are clueless to the fact that they may have signed their own death warrant. Israel is here to stay. Israel’s enemies are not.

“You shall not be afraid of the terror by night, nor of the arrow that flies by day…because you have made the Lord, who is my refuge, even the Most High, your dwelling place” Psalm 91:5,9