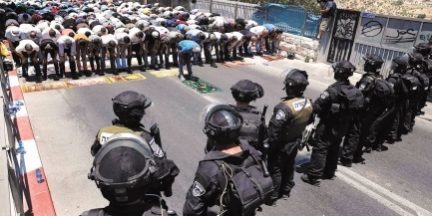 Officials in the Public Security Ministry may be avoiding the concept “third Intifada,” but it would appear as though this is the first time in many years that Israel has gotten this close to an all-out eruption among Arab citizens living inside the country’s pre-1967 borders.

The disturbances in east Jerusalem spread over the weekend to the Triangle region and even the Galilee’s Nazareth, when in this weekend’s most serious incident, three drivers were trapped and attacked inside Qalansawe, just for being Jews. One of the drivers successfully fled. His vehicle was torched. Dozens of lawbreakers were arrested.

In light of this weekend’s disturbances, and because of fears that they will spread, Israel Police issued an emergency summons to all border police in the reserves. On Friday, Israel Police Commissioner Insp. Gen. Yohanan Danino boosted the police presence in particularly volatile areas. He told police to “show determination and zero tolerance” to lawbreakers.

“Israel Police considers and will continue to consider with the utmost severity any shows of violence, incitement and nationalistic crime,” he said. “I stand by officers and commanders in their important, uncompromising operations during such times, and always. These are particularly sensitive days and we have received, together with the IDF security forces, the responsibility to do everything in our power to stop an escalation in Jerusalem, Judea and Samaria and the rest of the country.”

Since Friday afternoon, hundreds of younger Arabs took to the major junctions around Tira, Tayibe ‎and Qalansawe and did whatever they pleased. They blocked roads, flung stones and rolled burning tires. Because of the disruptions, Route 444 was temporary closed, which didn’t sit well, to put it lightly, with the residents of Shaar Efraim, whose moshav gates were forced to remain closed and its residents remaining inside all weekend. Some tried their luck through the surrounding fields.

In Tayibe, meanwhile, local police Commander David Pilo went out to personally witness the scene and saw masked men hurling stones at police cars and using fireworks as weapons. Sharon District police commander Brig. Gen. Kobi Shabtai, was even forced to open fire at one car’s tires out of fears that the driver was attempting to mow down nearby officers. The passengers in the car fled the scene.

On Friday afternoon police received reports that young Jewish individuals had been attacked in Qalansawe, and Arab city in central Israel. According to the suspicion, masked men attacked Jews who were trapped on Route 5614 near the town. The assailants blocked the lane and asked the drivers if they were Jewish. As the question was answered in Hebrew, the attackers overran the car and started assaulting its passengers. One of the passengers managed to escape the vehicle. Another car with a Jewish driver and passenger fled on foot as the attackers torched his car. A policeman in uniform was also among those attacked: his private vehicle was pelted with stones, but he managed to escape unharmed. A biker passing through the area was toppled over and lightly injured. After receiving treatment from Yarkon Magen David Adom paramedics, he continued on his way. Five police officers were lightly wounded during operations to disperse demonstrators, mostly from stones.

Traffic resumed at all major junctions by nightfall.

In Nazareth, about 150 agitated young people, mostly wearing face masks, tried to block the Zechuchit Junction at the entrance to the city. They threw stones at police officers and burned small dumpsters, but they were stopped by the Northern District Police Special Patrol Unit. After the iftar, the meal that breaks the daily Ramadan fast, there was another attempt to rile up crowds, but most of the young people dispersed just before the World Cup match between the Netherlands and Costa Rica.

At the Kafr Manda Junction in northern Israel, about 100 demonstrators burned tires and block the road. A similar demonstration was held at the Fureidis Junction on Route 4 near Zichron Yaakov.

Arab-Jewish tension was palpable in the Haifa area as well. Several demonstrators began rolling burning tires near the Mazraa village, which is near Acre, across Route 4. Residents of the town of Mei Ami reported stones being thrown from the direction of nearby villages. Also, near the Ein Hamifratz Junction, several drivers lodged complaints that their cars were being hit with stones. A police vehicle was also pelted with stones.

Stones were also hurled at the Baqa al-Gharbiyye Junction on Route 6. Two suspects were arrested.

And if there is unrest among the country’s Arab citizens, locals in the Wadi Ara region won’t sit idly by. In the area, which was the site of the intense October 2000 riots, hundreds of demonstrators made persistent attempts to block Route 65. They flung stones, burned tires and threw firebombs at the Umm al-Fahm junction and at other sites. There were no injuries, but damage was caused to several vehicles and equipment. Nine demonstrators were arrested.

After his briefing, Aharonovitch said: “We will not allow the throwing of stones and burning tires on Route 65, which is a main artery in Israel. We haven’t reached a third intifada and we haven’t lost control of the situation. We have a strong police force which will remain operating and whoever takes the law into his own hands will be arrested and sent to jail.”

Not everyone in the Arab populace feels the same at the demonstrators. Business owners expressed their concern over the loss of income they could should the riots ensue. Arab municipal authorities also condemned the riots.

Some 300 left-wing activists rallied in Haifa Saturday night to protest the Israel Defense Forces’ operations in the Gaza Strip and Israel’s policy in the West Bank. On the opposite side, dozens of right-wing activists got together waving Israeli flags and holding up pro-IDF banners. The right-wing group called on the leftists to “go to Gaza.”

A large contingent of policemen under the command of Israel Police Commander Avi Edri, and border policemen kept the two protesting groups apart.