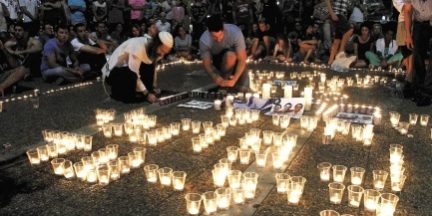 The citizens of Israel were shocked and saddened on Monday when news emerged that the bodies of the three Israeli teenagers who were kidnapped on June 12 were discovered in a field west of Halhul, near Hebron.

The funerals of Gil-ad Shaer and U.S.-Israeli national Naftali Frenkel, both 16, and Eyal Yifrach, 19 were scheduled for Tuesday evening. Though the three did not live in the same town, they were to be buried side by side in the city of Modiin.

The kidnapping appalled Israelis who rallied behind the youngsters’ families in a display of national unity.

The teens had apparently been shot soon after being taken, while still in the kidnappers’ car, officials said.

The men Israel has accused of carrying out the abductions are still at large. Israeli media said the break in the case, which led to the discovery of the bodies, came after the suspects’ relatives were interrogated.

The dead bodies were discovered during a search conducted by soldiers from the elite Maglan special forces unit and the Kfir infantry brigade, as well as civilian volunteers. The focus on the specific area where the bodies were found was based on intelligence information gathered by the Shin Bet security agency. Also, a pair of glasses belonging to Yifrach was found nearby in recent days.

A senior official described the moment the bodies were found as “sad and emotional.”

“It was not by chance that we found the bodies,” the official said, noting that Monday’s search was based on a detailed analysis of the area.

After the bodies were discovered, IDF Chief of Staff Lt. Gen. Benny Gantz arrived at the scene for a situational assessment with GOC Central Command Maj. Gen. Nitzan Alon and Coordinator of Government Activities in the Territories Maj. Gen. Yoav Mordechai.

The field is situated 15 minutes by car from Alon Shvut Junction, where the teens were kidnapped on June 12.

The condition of the bodies indicated that the teens were killed shortly after being kidnapped. Experts suggested that at least one of the boys put up a fight, according to evidence on the body. One of the teens was able to call the police before they were murdered.

After being pulled out of the ground, the bodies underwent forensic testing. The families of the teens were notified even before the final identifications were made.

The Defense Ministry quickly announced that it recognized the three murdered teens as victims of terror.

Israeli defense officials said that Operation Brother’s Keeper has not come to an end, as the two Hamas members suspected of conducting the kidnapping — Marwan Qawasmeh, 29, and Amer Abu Aisheh, 33 — have yet to be caught. Defense officials believe the suspects are still in Judea and Samaria, but have gone “completely off the radar.”

The Shin Bet said it was continuing its “intelligence and operational efforts to find all those involved in the attack.”