The names of the victims 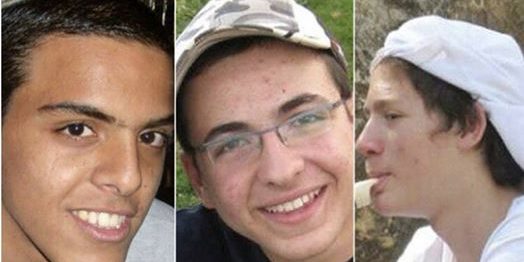 Three families in Israel are in agony. On June 12, when their sons Naftali Fraenkel, Eyal Yifrah and Gil-Ad Shaer were kidnapped by Islamic savages, the Fraenkels, Yifrahs and Shaers entered a new world where every breath they take is filled with devastating guilt – that they breathe free while their sons suffer unknown miseries.
Every moment that passes is filled with crushed hope that they will get word that their sons are free, and then the word doesn’t come. And it doesn’t come the next moment, or the next.

And so they will live, in agony, until this ordeal has ended.

Our hearts go out to these families. Our prayers are continuously directed towards them. And in a profound sense that is uniquely Israeli, the people of Israel share their pain. With this pain comes a sincere and overpowering desire to do something to bring the captive teenagers home.

What can be done?

There are only two ways for Israel to free hostages.

The government can devote all necessary resources to gathering actionable intelligence that will lead IDF troops to the boys.

Or the government can surrender to the terrorists by freeing thousands of Palestinian terrorist murderers from Israeli prisons.

So far, the government is concentrating on Option 1.

But Option 2 is lurking around the corner. And we need to confront it now – head on – before it takes center stage.

Over the past 30 years, Israel has released thousands of terrorists from its prisons in exchange for hostages. Thousands more have been freed as so-called “confidence building measures,” to appease our supposedly moderate Palestinian negotiating partners into sharing a table with their Israeli counterparts.

In every instance, these terrorist releases have led to the murder and abduction of other Israelis.

The clock started ticking down to Naftali, Gil-Ad and Eyal’s abduction on October 19, 2011 when Israel released 1,027 Palestinian terrorists in exchange for IDF Sgt. Gilad Schalit who had been held hostage by Hamas for more than five years.

The countdown also began that day for the murder of Baruch Mizrahi, the police officer who was killed in a roadside shooting in April as he drove to a Passover Seder with his wife and children. Mizrahi’s killer was one of the terrorists released for Schalit.

Some politicians are trying to take steps to prevent these swaps in the future. Foreign Minister Avigdor Liberman told the media he will prohibit all members of his Yisrael Beytenu party from voting in favor of a hostages-for-terrorists swap if one is on offer in the future.

The day before Fraenkel, Shaer and Yifrah were kidnapped, the Knesset passed a preliminary reading of a bill sponsored by MK Ayelet Shaked from Bayit Yehudi to constrain the president’s power to commute the sentences of some convicted murderers. The idea is that by passing the law, the Knesset will make it impossible for the government to agree to swap murderers for hostages. But then, to avoid the law, all governments will have to do is release prisoners who weren’t sentenced to life without possibility of parole.

The problem is that our media-compliant leadership refuses to act responsibly.

The only way to prevent more Israelis from being abducted in the future is to deter the Palestinians from abducting them.

Deterrence can only be built up over time, by behaving consistently in a manner that convinces the other side that it is not in its interest to do something that you don’t want it to do.

Through their willingness to release murderers for hostages – and even for hostage bodies – our leaders have told our enemies that they should feel free to steal our children. Their payoff is guaranteed.

Through their willingness to free murderers, our leaders have shown our enemies that they should feel free to murder as many Israelis as they can. They know that once their comrades take another Israeli hostage, (or three), they will go free.

And of course, our politicians are not the only ones at fault. Prime Minister Binyamin Netanyahu and his colleagues and predecessors swim in an acrid stream, where this sort of behavior is required.

To their disgrace, our media consistently behave as advocates and lobbyists for hostage-takers and imprisoned murderers against Israeli society.

For instance, in the case of Schalit, the media worked hand-in-glove with the Schalit family and its public relations firm to convince the public that we should think of a soldier as a child, and not as any child, but as our child.

In more than a thousand media reports, profiles, tear-jerker interviews with Schalit’s kindergarten teachers and siblings, we were told that if we are good and moral people, we must prefer Schalit’s freedom to the continued imprisonment of terrorists who constitute a mortal threat to every other child – and parent – in the country.

Public relations agent Tami Shenkman led the campaign for the terrorists’ release. She was the one who put together the sales strategy for convincing us that capitulating to Palestinian extortion is an act of moral courage.

For her efforts the media lavished her with fawning, heroic profiles.

And for the media’s efforts, three teenagers are now hostages.

And this also ought to teach us a thing or two about deterrence.

Our media and our politicians have effusively praised Palestinian Authority President and Fatah chief Mahmoud Abbas for saying a few lines in favor of releasing Eyal, Gil-Ad and Naftali. But with all due respect, Abbas is responsible for their abduction.

Abbas’s statement calling for the boys to be released was the rhetorical equivalent of trying to put an already exploded bomb back in its shell. Indeed, it is even worse than that. It was Abbas pretending to put a detonated bomb back in its casing after Abbas built the bomb, prepared the fuse and gave the bombers a matchbook.

For 20 years, Abbas and his colleagues in the PA have indoctrinated the Palestinians to view Jews as human scum and seek our annihilation. This message is communicated in all venues. From nursery through the universities, in the mosques, in summer camps, on television, radio and the Internet, Palestinians of all ages are taught that Jews have no right to live. They are encouraged to murder us and view contributing to our destruction as their highest goal in life.

Hostage taking – a war crime – is presented as one of the highest achievements possible. This is why the overwhelming majority of Palestinians applauds and celebrates the kidnap of the three teens.

For 20 years, the PA has indoctrinated its society in a culture of hatred and violence against Israel and the Jewish People. And the results were as predictable as the tides. Nearly 2,000 Israelis have been murdered in Palestinian terror attacks since the PA was established.

Israel can take action to punish the Palestinians for their unlawful behavior. We can arrest their imams for soliciting murder. We can close their schools and shutter their television stations for the same reason.

But we have done none of these things.

All Israel has done in the face of this poison is complain to the Americans.

Even worse than doing nothing, we actively facilitate the PA’s wholesale indoctrination of the Palestinians in genocidal Jew hatred.

We support the US policy of training and organizing a Palestinian army manned by people who have been subjected to this indoctrination for two decades.

Our leaders proclaim Abbas is a moderate. And still today we say he’s a good guy. The problem, Netanyahu says, is Abbas has formed a unity government with Hamas. But if he quits that, then we will have no beef with him.

The people of Israel want the families’ agony to end.

We want the boys’ terror to end. But the only body that can responsibly accomplish that mission is the IDF and the Shin Bet (Israel Security Agency). We cannot find them ourselves.

What we can and must do, however, is protect society as a whole from the next kidnapping. To this end, we need to shame – name by name – the media personalities from Avi Tzvi, the CEO of Reshet, Israel’s largest television franchise, to radio hosts and pop stars like Keren Neubach and Aviv Gefen who demanded the government free 1,027 terrorists from prison.

As for our government ministers, and our prime minister, you need to fix the damage you caused.

You knew when you signed the Schalit deal that the ink was the blood of the victims to come. We didn’t know their names then. But now we do: Baruch Mizrahi, Naftali Fraenkel, Eyal Yifrah and Gilad Shaer.

It’s time you understand that after what you did, the only way to change the enemies’ cost-benefit analysis of abductions and other atrocities is for you to change your way of doing business.

This means you have to stop appeasing terrorists and start punishing them. And the punishment needs to be consistent, and painful. Among other things, this means no more money, no more guns and no more legitimacy, not only to Hamas, but to the PA. If you want to do it gradually, you can do it gradually.

It means that every time the Palestinian media broadcasts anti-Jewish bile, they lose something of value.

True, taking such action will likely make it more difficult for elected leaders and military commanders to vacation in Europe. But no one forced you to take your jobs. You asked for the responsibility of providing for the collective defense. And you can’t fulfill your duty by being nice to terrorists or to outsiders who side with them.

Schalit’s media flacks were right. He is a son of all of Israel.

And so are Naftali, Gil-Ad and Eyal who are now captive because of the deal we signed for Gilad.

As we pray for their speedy and safe return home, we must take action remove the targets from the backs of every citizen of Israel. Those targets were placed there by our treacherous media, and by successive governments who preferred the cheap perfume scent of appeasement over the blood, sweat and tears required to secure our freedom and security.