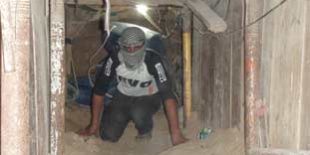 The Israeli military has discovered dozens of suspected terror tunnels and weapons laboratories in the Hebron area during Operation Brother’s Keeper, the operation to find three teen boys kidnapped by Hamas, reports Israeli news site Ynet. Members of Israel’s elite engineering unit Yahalom uncovered the tunnels and laboratories while searching for the three teens kidnapped in the West Bank ten days ago.

Some of the tunnels were found by soldiers inside the homes of Palestinians, under large pieces of furniture and laundry machines.
Using their specialized equipment, Yahalom (diamond in Hebrew) forces participated in dozens of raids on the homes of Palestinian activists across the West Bank, confiscating caches of weapons and explosives.

The unit’s forces discovered some 20 laboratories for manufacturing improvised explosives devices (IEDs) hidden in homes they searched. “We would arrive at a suspicious home and find a family living on the first floor and a laboratory with explosives on the third floor,” said a senior officer in the unit.

We also discovered underground spaces in the Hebron area which we had not known about previously,” he added.

IDF forces continued to comb the area north of Hebron on Sunday, searching wells, water reservoirs, pits and ditches on agricultural lands, and homes in order to find the kidnapped teens or a clue that will lead Israeli forces to them.

IDF Spokesperson Brig. Gen. Moti Almoz said the IDF has focused its efforts on finding the missing teens. “We are conducting an enormous intelligence effort in cooperation with Shin Bet personnel and with guidance from the civil authorities. This effort will continue in the coming days.”

At the weekly cabinet meeting on Sunday, Prime Minister Benjamin Netanyahu reiterated that Hamas was responsible for the kidnapping of the teens. “We have unequivocal proof that this is Hamas. We are sharing this proof and information to this effect with several countries. Soon this information will be made public.”