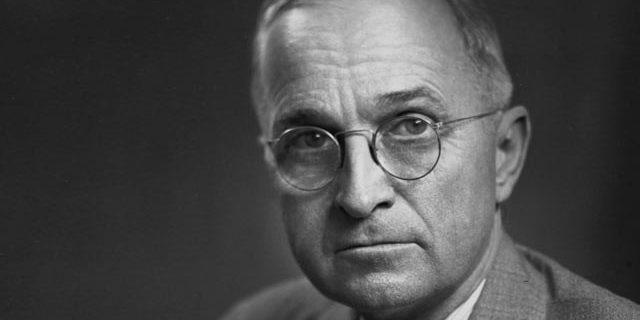 When Harry Truman replaced F.D. Roosevelt as President of the United States it never dawned upon him that he would order the use of the Atomic Bomb.

So what were the horrendous circumstances that forced him to unleash the most lethal weapon ever devised by man until that time?

It was not any particular act on the part of the Japanese enemy, but rather an ideological mindset which had the potential to overcome any weapon in the US armory.

It was the mindset which gave pre-eminence to death over life.

Kamikazi pilots would crash their planes into the water level of US ships in belief that this act would replace the pilots’ transitory existence in this world with immortality in the upper world.

Mr. Truman understood that a society that values life cannot overcome one that values death, and the only viable option was the total destruction of the enemy.

Truman knew that invading the Japanese mainland would cost the United States more than one million dead soldiers and ten times that number of wounded. He had no choice but to end the war by extreme means, even when the casualties would be noncombatant men, women and children.
Hiroshima and Nagasaki serve as reminders that in future conflicts between those who value life vs. those who esteem death, that there is no room for compromise or compassion, but only expediting their death wish.

This lesson is very clear in our parasha.

When Moshe Rabbeinu (Moses) appealed to Datan and Aviram as co-instigators of the rebellion against Hashem’s appointments, they replied (Bamidbar, Numbers 16,14):

Datan and Aviram were replying in the name of all the rebels when they used the plural “the eyes of these men”, intimating that not even blindness would make them retreat; and under the circumstance the merciful Almighty had no choice but to rid the world of them. How much more so when the enemy values death over life.

Societies which live according to the values of life with justice and dignity as espoused by the Torah are now in an intransigent struggle against great numbers of Arabs and other Moslems who seek the appellation “shahid” – holy martyr. The bloodshed in North Africa, Sudan, Nigeria, Somalia, Ghana, Mali, Syria, Iraq and soon to come to Jordan and Europe is horrific, and all in the name of their Allah.

Hamas and Hezbollah on our own doorsteps are steeped in the shahid mentality beginning with kindergarten and ending in the grave.

This is the Yishmael (Ishmael) that our mother Sarah perceived when she demanded of Avraham (Abraham) to expel Hagar and the ruthless, incorrigible Yishmael.

When Avraham heard that his nephew Lot was taken captive, he did not enter into negotiations with the perpetrators, but killed them. When a single non-Jewish maid servant was taken captive (Bamidbar 21,1), Moshe declared war in order to retrieve her. When Amalek took the city of Tziklag (Shmuel 1 chapter 30) David reacted immediately with military might.

Israel owes a debt to Jewish history, to the Torah way of right and wrong, and to the soldiers and citizens of the State.

Were it in my authority, I would deliver an ultimatum: If the boys are not returned unharmed within two hours, then all the murderers of Jews in our jails will be summarily executed; all the Arab towns in the vicinity of Gush Etzion will be given over to Jewish settlement and the infrastructure of Gaza will be destroyed.

Granted, that this contradicts the principle of due process. But remember, this is the Middle East where democracy, due process, compassion, justice and common sense are “checked at the door”.

This is the language internationally understood by the Arab adherents of Allah; the language of Lebanon, Syria, Iraq, Egypt, Yemen, North Africa, Iran, Shechem and Hevron.

But one need not worry. Our government will not do any of the above.

We have to leave something for the Mashiach.

What’s did the navi (prophet) mean when he said “in the land”?

A single human life has little value in today’s world. The death of one individual pales before the 6 million Jews who were murdered in the Shoah, or the 30 million Russians whom Stalin admitted to murdering in 1930, or the 1.5 million Armenians slaughtered by the Turks or the 2 million Cambodians at the hands of Pol Pot, or the 1 million Congolese murdered by the Belgians or the untold numbers murdered in North Korea. The world’s sensitivities are so numbed by the sheer numbers that one or two victims go unnoticed.

Hundreds of girls are kidnapped in Nigeria, and the Nigerian government did not even raise eyebrow or move a muscle to find them.

While slavery is rampant in the Arab world no one really cares. And even when the US administration pays a huge price to release a soldier from captivity, it was not for love of the soldier (who it seems was a deserter) but for the political benefits to the President.

This is the moral standard in today’s world.

Except in the eyes of the Jewish nation when the victim and the survivor are Jews living in Eretz Yisrael, where the Almighty demonstrates that his people are uniquely different, as quoted above:
וּמִי כְעַמְּךָ כְּיִשְׂרָאֵל גּוֹי אֶחָד בָּאָרֶץ

Since it was announced that three teenage yeshiva boys were kidnapped, the whole country has been in a state of semi-depression. The army is scouring every Arab town and village in Yehuda and Shomron in search of them.

Prayers are being said throughout the country for their return. The Prime Minister called them “Our sons”.

Is it a coincidence that two of the youngsters are students in a yeshiva named “Makor Chaim” – the source of life? As in the verse:
כי עמך מקור חיים באורך נראה אור:

For with you is the source of life, in your light we see light.

In the light of what is happening now in Eretz Yisrael, where we have set aside our differences in order to join hands in the singular goal of finding these three youngsters, we can understand the intent of the last word “ba’aretz” in the verse
ומִי כְעַמְּךָ כְּיִשְׂרָאֵל גּוֹי אֶחָד בָּאָרֶץ

For only here – in the “Land” of Hashem – can a Jew fully feel and express the brotherhood and sisterhood of being the authentic sons and daughters of Avraham, Yitzchak, Ya’akov, Sarah, Rivka, Rachel, Bil’ha and Zilpa.

May we merit to see the return of Yaakov, Gil’ad and Eyal to their homes together with the return of all Am Yisrael to our magnificent home of Eretz