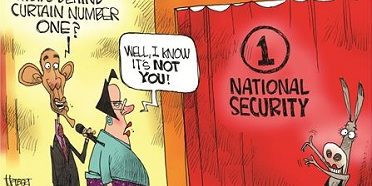 For years, President Obama has been claiming credit for “ending wars,” when, in fact, he was pulling the United States out of wars that were far from over. Now the pretense is becoming increasingly difficult to sustain.

On Monday, a loathsome offshoot of al-Qaeda, the self-styled Islamic State of Iraq and Syria, captured Mosul, one of Iraq’s most important cities, seizing large caches of modern weaponry and sending half a million civilians fleeing in terror. ISIS, which can make the original al-Qaeda look moderate, controls large swaths of territory stretching from northern Syria into Iraq. On Tuesday, militants advanced toward Baghdad, capturing Tikrit and other cities.

If Iraq joins Syria in full-fledged civil war, the danger to U.S. allies in Israel, Turkey, Jordan and the Kurdish region of Iraq is immense. These terrorist safe havens also pose a direct threat to the United States, according to U.S. officials. “We know individuals from the U.S., Canada and Europe are traveling to Syria to fight in the conflict,” Jeh Johnson, secretary of homeland security, said earlier this year. “At the same time, extremists are actively trying to recruit Westerners, indoctrinate them, and see them return to their home countries with an extremist mission.”

When Mr. Obama defended his foreign policy in a speech at West Point two weeks ago, he triggered some interesting debate about the relative merits of engagement and restraint. But the question of whether Mr. Obama more closely resembles Dwight D. Eisenhower or Jimmy Carter is less relevant than the results of his policy, which are increasingly worrisome.

In Syria, where for three years Mr. Obama has assiduously avoided meaningful engagement, civil war has given rise to “the most catastrophic humanitarian crisis any of us have seen in a generation,” Mr. Obama’s United Nations ambassador Samantha Power said in February.

In Libya, Mr. Obama joined in a bombing campaign to topple dictator Moammar Gaddafi and then declined to provide security assistance to help the nation right itself. It, too, is on the verge of civil war.

In Iraq, Mr. Obama chose not to leave a residual force that might have helped keep the nation’s politics on track, even as the White House insisted there was no reason to worry. Denis McDonough, then deputy national security adviser and now White House chief of staff, told reporters in 2011 that Mr. Obama “said what we’re looking for is an Iraq that’s secure, stable and self-reliant, and that’s exactly what we got here. So there’s no question this is a success.”

Now Mr. Obama is applying the same recipe to Afghanistan: total withdrawal of U.S. troops by 2016, regardless of conditions.

At West Point, the president stressed that “not every problem has a military solution.” That is obviously true. In fact, a goal of U.S. policy should be to help shape events so that military solutions do not have to be considered. The presence of U.S. troops in South Korea, for example, has helped keep the peace for more than a half century.

Total withdrawal can instead lead to challenges like that posed by Iraq today, where every option — from staying aloof to more actively helping Iraqi forces — carries risks. The administration needs to accept the reality of the mounting danger in the Middle East and craft a strategy that goes beyond the slogan of “ending war responsibly.”