Israel furious at US support for Palestinian Unity Government 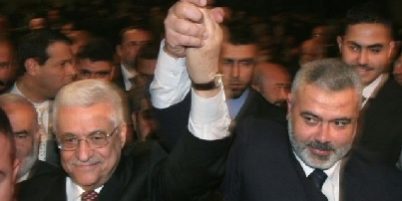 U.S. President Barack Obama’s administration said on Monday it plans to work with and fund the new Palestinian unity government. Israel immediately voiced its disappointment with the decision, which was also criticized by some U.S. lawmakers.

Palestinian Authority President Mahmoud Abbas swore in a unity government on Monday in a reconciliation deal with Hamas Islamists, who advocate Israel’s destruction.

The United States views Hamas as a terrorist organization and Congress has imposed restrictions on funding for the Palestinian Authority, which typically runs at $500 million a year, in the event of a unity government.

Senior U.S. lawmakers said Washington should suspend aid until it was sure of the Islamist group’s commitment to pursuing peace with Israel.

In its first comment since the Palestinian government was sworn in, however, the State Department stressed that it regarded the new cabinet as made up of technocrats and was willing to do business with it.

“At this point, it appears that President Abbas has formed an interim technocratic government that does not include ministers affiliated with Hamas,” State Department spokeswoman Jen Psaki told reporters at a press briefing.

“Based on what we know now, we intend to work with this government, but will be watching closely to ensure that it upholds principles that President Abbas reiterated today.” She was referring to Abbas’ commitment to honor past peace deals.

Asked if her comments meant U.S. aid would keep flowing, Psaki replied: “It does, but we will continue to evaluate the composition and policies of the new government and calibrate our approach accordingly.”

By law, U.S. aid may not benefit Hamas “or any entity effectively controlled by Hamas, any power-sharing government of which Hamas is a member, or that results from an agreement with Hamas and over which Hamas exercises undue influence.”

“Funding for the Palestinians is off the table until it is clear that the unity government is committed to peace and security,” said Kay Granger (R-Texas), chairwoman of the House of Representatives State and Foreign Operations subcommittee.

Eliot Engel (D-N.Y.), the top Democrat on the House Foreign Affairs Committee, said the Palestinian Authority was casting doubt on its commitment to the peace process and threatening future assistance.

“The United States is under no obligation to give a dime to the PA as it reconciles with a known terrorist group,” he said.

“U.S. law is clear,” the lobby group said in a statement. “No funds can be provided to a Palestinian government in which Hamas participates or has undue influence. We now urge Congress to conduct a thorough review of continued U.S. assistance to the Palestinian Authority to ensure that the law is completely followed and implemented.”

In Jerusalem, an Israeli official, requesting anonymity, said in a statement: “We are deeply disappointed by the State Department regarding working with the Palestinian unity government. If the American government wants to advance peace, it must call on Abbas to end his pact with Hamas and to return to peace talks with Israel. Instead, he is allowing Abbas to believe that joining a terrorist organization is an acceptable way to establish a government.”

A second official had tougher criticism, saying that the move is “like a knife in the back.”

Communications Minister Gilad Erdan said: “Unfortunately, American naivete is at an all-time high. Cooperating with Hamas, which is defined as a terrorist organization by the United States, is not acceptable. This American submission to the Palestinians’ dictates seriously hurts the chances of ever returning to negotiations, and it will make Israel take unilateral steps to protect its citizens from the terrorist government Abbas established.”

Prime Minister Benjamin Netanyahu convened a meeting of the Diplomatic-Security Cabinet to discuss the Palestinian unity government and potential sanctions Israel could impose on it, but no time frames for sanctions have been announced.

Meetings with Abbas have not been forbidden, in accordance with Justice Minister Tzipi Livni’s request. But it was determined that any meetings would need Netanyahu’s approval. Restrictions on Abbas’ freedom of movement have yet to be determined.

Proposals for more aggressive steps, including annexing territories and announcing construction beyond the Green Line, were rejected at the cabinet meeting in consideration of warnings from the United States and the European Union.

The chief concern in Israel is that the Palestinians will hold democratic elections with Hamas, achieve international recognition and join the United Nations. The cabinet decided to establish a team to explore options for action in light of the new reality of the Palestinian unity government. The team, headed by Defense Minister Moshe Ya’alon, will also discuss the possibility of annexing Gush Etzion to Israel, at Economy and Trade Minister Naftali Bennett’s request.

The cabinet further decided that negotiating with the new Palestinian government is not on the table, as “it is a government that depends on Hamas, the terror organization that calls for the destruction of Israel.”

Israel also announced that it would see the unity government as responsible for threats to Israeli security and attacks originating in the West Bank and Gaza.

“Today, Abbas said yes to terror and no to peace. This is a direct continuation of Abu Mazen’s policy of rejecting peace. He made a pact with the terror organization Hamas, which is responsible for the murders of more than 1,000 innocent Israelis, and for firing thousands of rockets at Israeli cities,” Netanyahu said.

Palestinian Prime Minister Rami Hamdallah will head the new unity government, and Abbas will remain in charge of security issues.

Abbas said the new government is committed to a two-state solution, renouncing violence and upholding past agreements
.
Hamas’s departing prime minister, Ismail Haniyeh, said, “Hamas will honor agreements signed by the Palestinian Authority,” but added: “The resistance is the national strategy of the Palestinian people.” Haniyeh made it clear that the existing Hamas government in the Gaza Strip would be dismantled, but that it would not give up control.

Bennett reacted to the unity announcement, saying the new Palestinian government is “a government of terrorists in suits.”

Meretz MK Isawi Frej said: “Netanyahu is speaking in the language of yesterday, using threats and fear at a time when the world wants to hold on to peace. The government would do well to welcome the new Palestinian government and to judge it by its actions and words.”

Meanwhile, in an Associated Press interview, the EU’s top envoy to the U.S. said Europe was prepared to work with a government backed by Hamas.

“We never said we would not,” Ambassador Joao Vale de Almeida said. “It’s a question of substance, rather than the question of composition of the government.”

Still, Vale de Almeida said Europe was insisting that the new Palestinian government recognize the right for Israel to exist and the need for a negotiated peace agreement. Israel broke off nearly nine months of peace negotiations in April after Abbas endorsed the tentative unity government to end seven years of separate leadership in the West Bank and Gaza Strip.

“We are in favor of Palestinian recognition,” Vale de Almeida said. “We think it’s an important element in the process to bringing a long-term solution — but not at any price. It has to be based on respect for a certain number of values.”

He said the EU would watch to see how the new unity government moves forward.