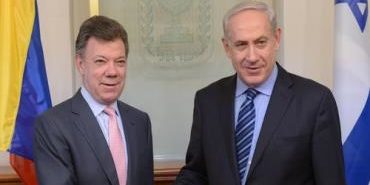 The government on Sunday approved a three-year NIS 50 million plan to strengthen its economic ties with at least five Latin American countries, meant to help Israel decrease its dependency on Europe as the primary trading partner.

The plan focuses on Costa Rica and the four countries that make up the Pacific Alliance – Columbia, Mexico, Chile and Peru.

These five countries have a combined GDP of over $3 trillion and constitute 40 percent of Latin America’s GDP, according to the Prime Minister’s Office.

“We are making a very concentrated and focused effort to vary our markets, from our previous dependence on the European market, to the growing Asian and Latin American markets, in which Israel needs to take a small market share and bring about growth, employment and social welfare in the State of Israel,” Netanyahu said at the start of Sunday’s weekly cabinet meeting.

“This is a strategic and – I think – a very promising effort. It has already begun to show results and will continue to do so. I would like all ministers, each in his or her own field, to join this important effort,” Netanyahu said.

Overall, in 2013, Israel’s exported goods were worth $66.58 billion around the globe, according to the PMO. But only 2 percent, an amount worth $1 billion, went to the Pacific Alliance states.

Israel wants to expand the number of businesses that export to Latin America. At present 10 exporters account for almost 50 percent of the total exports to the region, according to the PMO.

The Pacific Alliance is the sixth largest economy in the world, the PMO said. It added that 26 percent of foreign investment in Latin America, over $70b., goes to those countries.

The average growth of its member states is 5 percent and imports are expected to grow by 6 percent per annum, the PMO said.

Israeli technology as well as its expertise in infrastructures, agriculture and science is in high demand in Latin America, the PMO said.

Israel has become more active in Latin America, and last February became an observer in the Pacific Alliance.

Israel can now participate in the Alliance’s staff work and attend its conferences, a move that will help facilitate cooperation with Latin America, the PMO said.

Foreign Minister Avigdor Liberman said that Israel’s new status as an observer nation “is an important diplomatic move” that will strengthen Israel’s economy and its ability to participate in markets with great potential.

Liberman plans to visit some of the Pacific Alliance countries later this year.

According to the three-year plan, designed by the Prime Minister’s Office and the Foreign Ministry, two commercial attache offices will be opened in Chile and Peru.

Israel will also boost its embassies in Mexico, Columbia and Costa Rico.

The embassy in Paraguay, which was closed in February 2002 for budgetary reasons, will be re-opened.

Efforts are to be made to increase tourism from Columbia and Mexico.

With the help of the Inter-American Development Bank there will be a designated fund for training guidance and cooperation in industrial research and development.

The IADB and Israel are to contribute NIS 7m. each.

Joint space projects will be implemented. Progress will be made toward free trade and research agreements and the signing of financial protocols with Colombia, Brazil and Chile. A joint agricultural research fund with Mexico will be established.

The Foreign Ministry director-general will chair an inter-ministerial team that includes the PMO as well as the Economy, Tourism, Agriculture, Science and Technology and Finance ministries.

It will monitor implementation of the cabinet’s decision and carry out the government working plan in cooperation with the Latin American countries.