Political correctness at the 9/11 museum 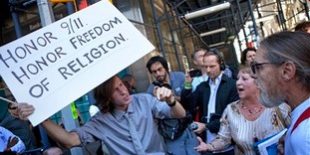 Here we go again. How many times must we endure hearing that politically correct inanity: “Islam is a religion of peace.”

It was President George W. Bush who uttered this phrase, even as the ruins of the Twin Towers and a large part of the Pentagon were still smoldering. But such a belief flies in the face of reality and one only has to look in the Quran and read the passages – especially the latter suras which take precedence – to understand what occupies the mindset, perhaps that of the overwhelming majority, of so many Muslims today.

It is the video at the soon to be opened 9/11 museum that has already sparked outrage from Muslim pressure groups who demanded and won the removal of any mention of Islamic terrorism. On the other hand, the general public see that the old and discredited mantra, repeated yet again, that Islam is a religion of peace, is included in the video.

Robert Spencer points out below just what motivated and inspired the Muslim hijackers and masterminds of the criminal attack upon America that led to some 3,000 innocents dying horribly on that day in September that the Islamic terrorists made so evil. This is what the murderers themselves said:

“Many thanks to Allah, for his kind gesture, and choosing us to perform the act of Jihad for his cause and to defend Islam and Muslims. Therefore, killing you and fighting you, destroying you and terrorizing you, responding back to your attacks, are all considered to be a great legitimate duty in our religion….We ask to be near to Allah, we fight you and destroy you and terrorize you. The Jihad in god’s cause is a great duty in our religion.” — The “9/11 Shura Council” (that’s what they called themselves; they are the masterminds of the 9/11 plot: Khalid Sheikh Mohammed, Ramzi bin As-Shibh, Walid bin ‘Attash, Mustafa Ahmed AI-Hawsawi, and ‘Ali ‘abd Al-’Aziz ‘Ali).

Dr. Sami Alrabaa, is an ex-Muslim, professor of Sociology and an Arab-Muslim culture specialist who has taught at Kuwait University, King Saud University, and Michigan State University. He is the author of the book: “Veiled Atrocities”, published by Prometheus, New York 2010 .

In an article he wrote for Family Security Matters, Dr. Sami Alrabaa stated:

“In view of the fact that the Quran (the holy book of Muslims) contains atrocious passages which incite to killing mostly innocent people – Muslims and non-Muslims – and in view of the fact that it’s Muslims who are terrorizing their societies and the whole world, in particular in Afghanistan, Pakistan, Nigeria, Mali, and in Hamas’s Gaza, one can safely say: there is something wrong with this religion.”

In November 24, 2002, just over a year after the atrocity on 9/11, Osama bin Laden sent a letter to the American people in which he impudently demanded that they embrace and convert to Islam. He wrote: “The first thing that we are calling you to is Islam.”

There are some Muslims who fear being accused of apostasy, which according to the Quran is punished by death. Here is what the Quran says about apostasy: “But if they turn away (leave Islam and embrace another faith), then seize them and kill them wherever you find (them)….. Sura 4, verse 89.”

Though Judaism and Christianity have accepted reformations of one kind or another, any reforms to Islam is ultimately punishable by death. But in a western world that now embraces the unholy trinity of, multiculturalism, political correctness and diversity, it is highly unlikely that the courts and political leaders would condemn those cruel and human rights abuses that permeate so many passages in the Quran and Hadith.

As Dr. Alrabaa states: “At the end of the day, all I want to achieve is opening the eyes of Muslims and non-Muslims to the truth, to the fact that Muslim terrorists are actually carrying out what their holy book instructs them to do. The evil is in the root, not in the fruit.”

Yet in the face of all evidence to the contrary (“Kill them (the infidels) wherever you find them.” (Sura 2, verse 191), we have President Barack Obama and many others still believing that “Islam is a peaceful religion.”

Finally, Dr. Alrabaa adds that, “it is going to be, in the long run, extremely difficult to contain Islamic extremism backed by the scriptures of Islam and tolerated by Western governments.”

Victor Sharpe is a freelance writer and author of several books including The Blue Hour, and Politicide.