Build a ‘young Israel of the Temple Mount’ 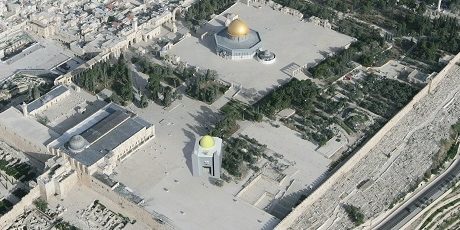 At first glance it would appear to be a recipe for disaster, a proposal so brash it could ignite a conflagration between Arab and Jew. But the idea to build a synagogue on the Temple Mount in Jerusalem, which was recently put forward by an impressive array of rabbis, professors and other public figures in a letter to Prime Minister Binyamin Netanyahu, might just contain within it the seeds of co-existence and should not be dismissed out of hand.

In their missive, the signatories wrote, “The Temple Mount is a unique place for prayer. We ask you, as prime minister, to do what is necessary to establish a place of prayer for Jews on the Temple Mount in a respectable and peaceful manner that will honor the holy place we all long for.”

What prompted the letter is the ongoing situation on the Temple Mount, which is simply intolerable and cannot continue. Jews are denied the right to pray there and their visits are severely restricted. Jewish visitors are often shadowed by members of the Muslim Wakf, who despite claiming to venerate the site nonetheless hurl curses, insults and occasional stones at them.

And the Israel Police bar Jews from bringing Bibles or prayer books onto the Mount, and have been known to instruct them not to move their lips, because it could be construed as an act of silent prayer.

This ongoing violation of basic rights, such as freedom of worship and free speech, goes against the very core of Israel’s ethos of tolerance. Indeed, the government’s restrictions on Jews on the Temple Mount are un-Jewish, anti-democratic and blatantly discriminatory, and it is time to put an end to them. The current situation only inflames passions on both sides, fostering still more Arab anger and Jewish bitterness.

A simple way to defuse the tension and to prevent confrontations would be to build a synagogue, the equivalent of a “Young Israel of the Temple Mount,” where Jews could pray freely and undisturbed.

Put aside for a moment all your preconceived notions about the subject and consider the following: for over four centuries after Caliph Omar conquered the land of Israel in 633-4 CE, a synagogue and Jewish house of study operated on the Temple Mount and Jews prayed there unmolested.

Among others, this is attested to by Rabbi Abraham bar Chiya HaNassi, a leading Spanish rabbinical authority of the 12th century, who wrote in his book Megilat Megaleh that, “at the beginning, after the Romans destroyed the Temple, Israel was not prevented from coming and praying there, and similarly the kings of Ishmael enacted a beneficent custom and allowed Israel to come to the Temple Mount and build a house of prayer and study.”

Furthermore, he notes, “all the exiles of Israel who lived near the Temple Mount would ascend on festivals and holidays and pray there.”

In other words, there is a clear historical precedent that even during periods when the Mount was under Muslim control, the rights of Jews were respected. If that was the case when the Caliph Omar ruled Jerusalem, why can’t it be so now that the city has returned to Jewish control? Even after the synagogue was closed in 1080, individual Jews continued to pray on the Mount, such as the great medieval Jewish authority Maimonides. In the 13th century, Meiri, one of the greatest commentators on the Talmud, noted in his comments on Tractate Shavuot (16a) that there was a custom among Jews to enter the Temple Mount.

In recent decades, prominent rabbinical authorities such as former chief rabbis Shlomo Goren and Mordechai Eliyahu have supported the idea of Jews ascending the Temple Mount and constructing a synagogue there. And after Israel liberated the Mount in 1967, Jews prayed and studied there regularly.

Rabbi Goren, who served as chief rabbi of the IDF in the 1967 Six Day War, wrote in his monumental work Har HaBayit (p.14), that after the site’s liberation, “in the framework of the IDF Chief Rabbinate, we held symposiums and conducted organized public prayers on the Temple Mount – morning, afternoon and evening – and we read from the Torah on the Sabbath and on Mondays and Thursdays.”

Sadly, the Israeli government later put an end to Rabbi Goren’s initiative. But the idea of building a Jewish house of prayer on the Mount has been gaining traction in recent years, and this is a welcome development.

Simply put: erecting a synagogue on the Temple Mount will not heighten Arab-Jewish conflict, it will lessen it. The best way to reduce friction on the Mount between the two communities is to accommodate both sides, rather than just shortchanging the Jews. Failure to do so will only continue to exacerbate tensions.

The Temple Mount is the holiest site for the Jewish people, the place toward which we directed our dreams and prayers of return over the past two millennia.

And now, ironically, it is precisely there that Jews are treated as pariahs.

This historical absurdity and moral obscenity must once and for all finally come to an end.