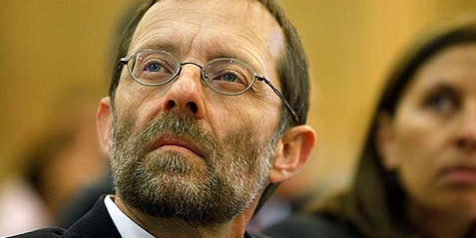 Thursday morning, riots erupted on the Temple Mount resulting in the closure of the holy site to Jews and tourists. MK Moshe Feiglin (Likud Beteinu) was visiting the Temple Mount when hundreds of Arab youth rioters attacked Feiglin and several others with him.

The rioters attacked Feiglin and his group by throwing stones at them. Feiglin was forced to leave the Temple Mount as security forces took measures to break up the riots.

According to reports, Feiglin entered the Temple Mount via the Moroccan gate and was immediately surrounded by Palestinians who yelled “Allah Akbar” and began to pelt the MK with stones.

The Temple Mount, Judaism’s holiest site, is under the control of the Muslim Waqf. The Waqf has total discretion on who is allowed to enter the holy area and Jewish prayer is deemed illegal.

Feiglin is attempting to end the discriminatory practices the Waqf imposes on the Temple Mount. At the recent Knesset debate, Feiglin said, “Behind the back of the people we have given up on any Israeli sovereignty on the Mount. Any terror organization can wave its flag up there – the flag of Israel? Don’t mention it even. And a verse of Psalms is pretext for arrest. The police even recommend taking the kippah off your head.”

Feiglin has been arrested previously for praying on the Temple Mount, in October 2012 and January 2013, prior to becoming an MK.

After being ejected from the Temple Mount on Thursday, Feiglin responded that “the incidents today show more than ever that the Temple Mount is such a powder-keg specifically because it is clear to the Palestinians that violence pays off.

Feiglin commended the Police but said that evacuating his group gave the rioters a huge victory.

“But cutting our visit short and clearing the Mount of Jews on the one hand while allowing the rioters to remain on the other left the victory in the hands of those who initiated the violence, and will only encourage more violence,” Feiglin said.

Two Palestinians were arrested in relation to the riots.