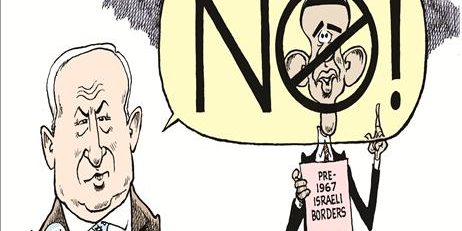 IN BARACK OBAMA’S Middle East, the explanation for the persistent lack of peace between Israel and the Palestinians is clear: It’s Bibi Netanyahu’s fault. Things would be so much easier if only the Israeli prime minister would bite the bullet.

Only in a make-believe Middle East is peace with the Palestinians the responsibility of Israel alone.

“One of the things my mom always used to tell me … is if there’s something you know you have to do, even if it’s difficult or unpleasant, you might as well just go ahead and do it, because waiting isn’t going to help,” Obama said in a Bloomberg interview published just before Netanyahu’s arrival in Washington this week. “This is not a situation where you wait and the problem goes away,” he warned. The Israeli leader had better “seize the moment” to finalize a peace deal with the Palestinians, or prepare for a painful global backlash that the United States will be powerless to stop. Stop building settlements across the Green Line, give the Palestinians the state they demand, or “our ability to manage the international fallout is going to be limited.”

Sound familiar? Only too. This is the fantasy Middle East, in which peace is the responsibility of the Israelis alone, and Palestinian rejectionism is merely an excuse for the Jewish state to drag its feet. It is part of a larger fantasy world — one in which revanchist Russian rulers sweetly change their policies at the push of a “reset” button, and in which a brutal Syrian regime swears off chemical weapons for fear of crossing an American “red line.”

In this wishful environment, there is a robust Palestinian peace camp eager for a two-state solution: a sovereign state of Palestine coexisting in harmony beside the Jewish state of Israel. If that lovely solution hasn’t materialized, it can only be due to unlovely stubbornness on the part of the Israelis and their elected leader. After all, the Palestinian leader is the peace-loving Mahmoud Abbas, who, Obama says, is so “sincere about his willingness to recognize Israel and its right to exist” and “committed to nonviolence and diplomatic efforts.”

But that is true only in the make-believe Middle East. In the real Middle East, it is Netanyahu who unilaterally halted settlement construction for 10 months — an unprecedented goodwill gesture — and whose Cabinet indicated last month that it would swallow its qualms and accept John Kerry’s framework for Israeli-Palestinian negotiations.

The real Abbas, on the other hand, spurned Israel’s offer of a Palestinian state in 2008, then refused for years to take part in US-sponsored talks with Israel, confident that Washington would pressure Israel into making painful concessions in order to lure the Palestinians back to the table. Those concessions eventually included the release of dozens of convicted Palestinian murderers, who were hailed by Abbas as “heroes” at an event celebrating their release. Yet instead of negotiating in good faith at last, Abbas demands still more up-front concessions, a demand he repeated on Monday.

The delusion at the core of the Israeli-Palestinian peace process is that the lack of Palestinian sovereignty is what keeps the conflict alive, and that the tension and violence would end if only the Arabs of Palestine could have a state of their own.

The root of the conflict hasn’t changed since 1948, when six Arab armies attacked the fledgling state of Israel: refusal to accept the right of Jews to a sovereign state in their national homeland.

That has never been true. What drives the conflict is not a hunger for Palestinian statehood, but a deep-rooted rejection of Jewish statehood. Arab leaders vehemently rejected the “two-state solution” that the United Nations recommended in 1947, and declared a “war of extermination” to prevent it from taking effect. Nearly 70 years later, the Palestinians are still unwilling to acknowledge Israel as the nation-state of the Jewish people — to recognize that Jews are entitled to a sovereign state in their national homeland, just as the Irish are entitled to sovereignty in Ireland, the Italians in Italy, and the Japanese in Japan.

Yet Palestinian leaders heatedly insist that they will never agree to any such thing. “This is out of the question,” Abbas said last month. Palestinian Authority negotiator Saeb Erekat complains: “When you say, ‘Accept Israel as a Jewish state,’ you are asking me to change my narrative.”

Just so. That narrative — that Jews are aliens in the Middle East, and Jewish sovereignty over any territory is intolerable — is precisely what must change if this conflict is to be resolved. Bashing Netanyahu may please the anti-Israel set, but it brings a just and lasting peace not one hour closer.