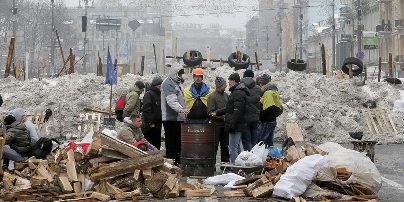 Despite the lack of a defined threat against them, representatives of Ukrainian Jewry indicated that they feel a general sense of unease as the pro – tests that shook Kiev for the last three months wind down.

There is currently “no information of Jews being targeted, but there is a danger because of vigilante groups,” Chief Rabbi Yaakov Bleich told The Jerusalem Post on Sunday.

“We have not seen any random attacks and we hope people are basically interested in law and order and not in mayhem,” he said, expressing his hope that protesters would begin turning in their arms tomorrow as scheduled.

“We are definitely worried about security and everybody should keep their guard up,” the American-born rabbi cautioned. “That’s because of the general situation. There are no threats that we know of.”

During a separate conversation last week, the rabbi said that security had been “tightened and strengthened at all Jewish buildings in Kiev” and that “the cost of the security is tremendous.”

On Saturday, the Jewish Agency announced that it would extend emergency aid to the Ukrainian Jewish community in order to strengthen its security.

The lack of law enforcement on the streets of Kiev on Sunday was a source of worry for members of the Jewish community, even as the same law enforcement engaged in violence against protesters last week and left dozens dead, including one Jewish man.

The man, identified by the World Jewish Congress as Alexander Schbarnuk, 44, was killed during the past week’s pitched battles that left the city’s Maidan Square, the site of the opposition protest camp, a charred ruin and that precipitated the downfall of embattled president Viktor Yanukovich.

There is a great deal of uncertainty among Kiev’s Jews, said one community member, speaking anonymously.

She said that while there has been no direct threat against Jewish institutions, two Jews were attacked during the protests and the general feeling of insecurity pervading the city has affected its Jews as well.

Things will calm down within a week, but life is still far from normal at the moment, she said.

Hillel Cohen, a representative of Hatzalah Ukraine, a local aid organization, told the Post that he felt no hostility while walking through Maidan dressed in a “visibly Jewish” fashion, but that “in the near future we should be careful and be alert,” echoing the sentiments expressed by many of his co-religionists.

Some have taken the prominent presence of the far-right Svoboda Party, the two attacks, and scattered sightings of swastikas spray-painted on walls as signs that danger to the Jewish community exists. However, Vyacheslav Likhachev, an expert on the far-right associated with the Euro-Asian Jewish Congress, feels differently.

Speaking with the Post on Sunday, Likhachev said that even with all of the Svoboda activists on the streets, not one attack against Jews that could be tracked back to the Maidan protesters has occurred.

The two incidents of anti-Semitic violence since the begin – ning of the protests, he alleged, were most likely provocations by the government looking for a pretext to clamp down on its political opponents.

“There is no real special danger for the Jewish community due to anti-Semitism from protesters,” he said.

According to Likhachev, the authorities tried to recruit him to take part in a propaganda campaign against the protesters and he believes that, given the lack of emphasis placed on Jews and other ethnic minorities by the opposition, including such factions as Svoboda, it is more likely that the attacks were part of this alleged campaign.

“The question of ethnic minorities was not on the agenda of the protest movement,” he said.

Svoboda, which catapulted itself from its status as a fringe group into Ukraine’s fourth biggest parliamentary faction during 2012 elections, has been accused of anti-Semitism by liberal and Jewish organizations, and party leader Oleh Tyahnybok has come under heavy criticism for a 2004 speech accusing a “Muscovite-Jewish mafia” of ruling the country.

Likhachev believes that the party’s success seems to have largely stemmed from discontent over Yanukovich, and with him out of the way Svoboda may disappear as well.

Despite his optimism, however, fear still pervades the local Jewish community, as it does the entire Ukraine, during the transition period.

“It ain’t over till it’s over,” Bleich said.