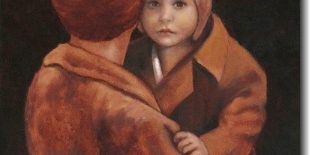 A special exhibition of The Auschwitz Album Re-Visited will be opened at the Jewish People Memory and Holocaust Museum in Dnepropetrovsk, Ukraine, in commemoration of the International Holocaust and Remembrance Day at the end of January 2014. The exhibition–representing the unique art work by the well-known American artist Pat Mercer Hutchens–is curated by Inna Rogatchi and is co-organised by The Rogatchi Foundation along with the Museum and The JerUSAlem Connection.

The exhibition consists of 40 dramatic works depicting the scenes from Auschwitz known from The Auschwitz Album and reflected upon by Pat Mercer Hutchens who has been working on this unique collection for several years. The artist and her family (Pat’s husband is the American hero, legendary soldier and public figure, Brigadier General of the US Army (Ret). James M. Hutchens) have decided to donate the 40-piece collection to the Ukrainian museum which is the largest of its kind in Eastern Europe. The very generous donation will allow the Museum to work with the unique collection also for their long-term educational programmes, as well as to show the collection to many of their partnering museums as a part of ongoing international inter-museum exchange programmes.

Previously, 28 works by Pat Mercer Hutchens from the series were exhibited at the Auschwitz International Youth Meeting Center in Poland, and over 30 works had been shown at the notable exhibition at Regent University (Virginia, USA).

The forthcoming exhibition is the largest to date. It is a collection of the dramatic art series based on the unparalleled story of The Auschwitz Album whose original is at Yad Vashem. It will be the first exhibition of Pat Mercer Hutchens’ work in Eastern Europe.

The Rogatchi Foundation is proud to co-organize the event which will bring this statement of compassion and humanity to that new and high-level museum in Ukraine and to Eastern Europe in general where the public is highly interested in the theme of the Holocaust. We found it symbolic that the museum decided to open with this valuable exhibition as their commemoration of the International Holocaust and Remembrance Day in 2014, and we are honored to participate in this effort.