Why is Germany telling Jews where to live? 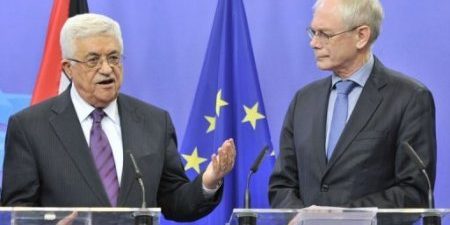 With an impeccable sense of timing, German Foreign Minister Frank-Walter Steinmeier arrived in Israel earlier this week, attended the funeral of Ariel Sharon, and then proceeded to browbeat Israel in public.

Speaking with reporters, Steinmeier accused the Jewish state of “damaging” the peace process by building homes for Jews in Judea and Samaria.

And in a discussion with Israeli Prime Minister Binyamin Netanyahu on the sidelines of Sharon’s interment, he pressed the premier to refrain from additional construction as this “could still disturb the process”.

While I am not familiar with bereavement rituals in Germany, I assume they do not include insulting one’s hosts right after the burial service.

And yet, while in Israel, Steinmeier apparently saw nothing wrong in doing just that: exploiting the opportunity to highlight a political issue regardless of how tasteless and unseemly it was to do so.

This is not the kind of behavior one expects from a “friend,” is it?

But what is even more offensive about Steinmeier’s exploits is the German government’s historical amnesia, which has left officials bereft of any sense of irony regarding their position on the right of Jews to live in Judea and Samaria.

After all, it was not even eight decades ago that Germany singled out Jews in the September 1935 Nuremberg laws, seeking to cast them out of civil society as a step towards “cleansing” German soil of their presence. Subsequently, in areas under German control, the right of Jews to live where they saw fit was severely restricted.

One would think that in light of this dark chapter in their history, Germans would be extra careful about wading into such an issue and proclaiming where Jews can live, build or raise their families.

But that has not been the case.

Indeed, last summer it was widely reported that Berlin had decided to back a European Union initiative that singles out Jewish-owned businesses in Judea and Samaria.

The move is aimed at targeting them for special treatment, which could include the application of unique labels of origin on products produced by Jews in the areas. Needless to say, goods made by Palestinian-run plants in the territories would not similarly be branded.

In an interview with Reuters last month, EU envoy to the Middle East Andreas Reinicke warned that if the latest round of peace talks between Israel and the Palestinians fails, the EU would speed up its plans to slap labels on Jewish-made goods from Judea and Samaria.

The hypocrisy behind the labeling crusade is all the more apparent when one considers that no such campaigns are being contemplated for other “disputed territories”. Hence, there is no European demand to label Chinese products made in Tibet, Russian items manufactured in Chechnya or Spanish goods from Catalonia. It seems that only when matters involve the Jewish state do European liberals insist on such measures.

This is not merely duplicity, it is discrimination pure and simple.

And in the case of Germany, such a stance is especially outrageous, and the government of Angela Merkel should be ashamed of itself for going along with it. Whatever one may think of the peace process and the two-state solution, it should be obvious that treating merchandise and construction differently simply because the person who owns the factory or built the house is a follower of Moses rather than Muhammad is an act of bigotry.

And in light of its own ignoble record during the 20th century, Germany and its leaders have a special responsibility to be exceptionally sensitive to such issues, particularly when they relate to Jews.

No one is suggesting Germany is planning a second Holocaust, but the country must show greater awareness regarding the painful irony at work here.

In 1936 a board game called “Juden Raus” (“Jews Out”) became popular throughout the Reich. Players would move figures representing Jews toward “collection points” from which they would be deported to the Land of Israel. “If you manage to see off six Jews,” the game instructed, “you’ve won a clear victory”.

Sadly, Germany is once again playing a similar game, albeit with one difference. Whereas previously the aim was to send Jews away to Israel, now their goal is to compel us to leave parts of it.

But I have a bit of news for Ms. Merkel and her colleagues: no one, especially not Germany, has the right to tell Jews where they can or cannot live.

In 1945, the Jewish people crawled out of the ovens of Europe and succeeded in reclaiming our ancestral homeland.

Regardless of what Berlin might think or say, we are not about to give any part of it away.