What have they wrought at St. James Church? 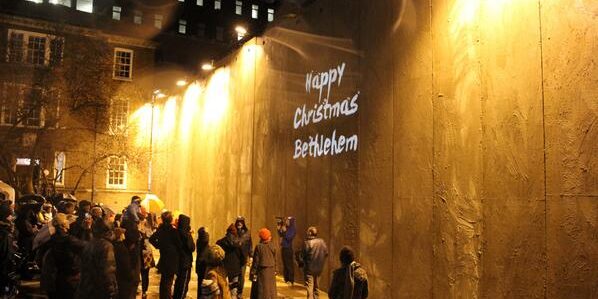 Those who have perpetrated a deplorable anti-Israel falsehood and outrage on the grounds of St. James Church in Piccadilly, London have done so fully knowing that their intention is to promote the ugliest PLO and Palestinian Authority propaganda.

The church has installed a life size 8 meter tall/30 meter long replica of Israel’s security wall in its courtyard. The wall separates Israeli territory and Bethlehem, the ancient Jewish town in which King David began life as a shepherd and which is pronounced Bet Lechem in Hebrew, meaning House of Bread.

Bethlehem was given away to the Arabs, who call themselves Palestinians, during the 1995 Interim Peace Accords in the hope that the newly created Palestinian Authority would live in peace side by side with the Jewish state of Israel. It was a vain hope as the Palestinians under the Holocaust denier, Mahmoud Abbas, the same man who oversaw the logistics of the Munich Massacre of eleven Israeli athletes, has no interest in living next to Israel but living instead of Israel.

What the clerics at St. James church and the anti-Israel polemicists, including columnist Yasmin Alibhai-Brown and War On Want’s in-house poet Rafeef Ziadah won’t admit is why is there a separation fence, most of it chain wire and not concrete, and why are there checkpoints?

First of all, before the fence was built, thousands of Israeli men, women, and children were killed or maimed by Arab terrorists entering Israel with impunity and either blowing themselves up in the midst of Israeli civilians, or planting bombs and detonating them in public places including on buses where many Israelis were burned alive in the resulting infernos.

The fence comprises an actual “wall” along only five per cent of its length. Since the fence was built, Palestinian Arab terror and murders of Israeli civilians has declined by about 98%. As a result, both Jewish and Arab lives have thus been saved, numbering in the thousands. But you won’t discover that stark fact at St. James church.

It is interesting to note that some 50 other countries also have separation walls, including the United States. Israel’s fence was built to keep Arab thugs and murderers out of its territory, unlike the Berlin wall which was constructed to prevent Germans from escaping Communist tyranny.

The sinful folks at St. James church will hide the truth, from a mostly uninformed public, that the reason for building the separation fence was the inhuman policy of the Arabs in their malevolent desire to infiltrate and murder Israelis.

In Israel, people have to be searched when entering shopping malls or public and government buildings thanks to the hateful activities of Palestinian terrorists. Israelis, Jews, Christians and Muslims, have to travel in buses with bullet-proof and stone-proof windows, even in the suburbs of Israel’s capital city of Jerusalem.

Because of these same Muslim Arab jihadis and terrorists, air travelers in America now have to remove shoes, belts, and jackets and cannot bring more than a certain minimum amount of liquids or gels on  board the aircraft. All these humiliations have to be endured because Islamic terrorists commited atrocities using shoe bombs and liquid gel explosives to kill non-Muslims.

Let us never forget what the nineteen Saudi nationals perpetrated on September 11, 2001 when they left 3,000 Americans and others dead in New York City, at the Pentagon and in a field in Pennsylvania. But the pathetic folks who erected the anti-Israel monstrosity at the St. James church remain mute in the face of the Islamic drive for world conquest. It is the same ideology wrapped in a religion (to quote Winston Churchill) that infests the Palestinian Authority, which refuses to live in peace and harmony with the non-Muslim world, and which forced Israel to build the separation fence to protect its civilians.

Virtually every day, attempts are made to smuggle weapons and explosives through the checkpoints into Israel, to be used for murder and mayhem. Ambulances and pregnant women are a favorite form of smuggling.

A particularly egregious example of this hatred is exemplified by the Arab woman from the Hamas occupied Gaza who came to an Israeli hospital to be treated for extensive burns she had suffered in her kitchen.

Yes, Palestinians from Gaza in their thousands are treated freely in Israeli hospitals with no distinction between them and Israelis; even as the same Palestinians fire missiles into Israeli villages and towns in the hope of killing as many civilians as possible.

The Israeli doctors and nurses treated the woman, alleviated her suffering, and told her to return for follow-up treatment. A month later she arrived for her follow up care at the hospital but at the entrance she was found to have a deadly explosive belt on her in order to kill as many doctors and patients in the hospital as she could. This horrific death cult is tragically not rare among Muslim Arabs.

The miscreants at St. James are among the legions of anti-Semites who use the words “genocide” or “ethnic cleansing” against the Jewish state with regards to the Arab population within Israel and in the so-called territories, which are in fact the biblical and ancestral heartland of the Jewish people. That territory is known as Judea and Samaria but the world prefers to call it by the non-Jewish name the Jordanians gave to it, “the West Bank,” during their nineteen year old illegal occupation.

The Arab population of the disputed territories are increasing and are infinitely better off than their fellow Arabs in most of the vast Arab world. If anyone is interested in exactly who is proposing genocide, please look at the IMRA website, which translates into English from the Arabic, many newspaper articles, sermons, horrendous anti-Israel indoctrination of children, and vitriolic speeches in the Arab world, especially those spewed within the government controlled Palestinian Authority calling for the extermination of the Jewish state and death to America.

The fence is necessary. The checkpoints are necessary. They did not create terrorism, they were created by terrorism. The Israelis would be thrilled to remove the barriers if a true and lasting peace would come to pass but it may be impossible so long as the Muslim world will never accept any non-Muslim nation in territory once conquered by Muslims in the name of Allah.

Sadly, the Arab states have lied and continue to lie about realities in the Middle East. Over the years Israel has been the victim of unprovoked aggression, and the Arabs have been the aggressors. The Israelis have more tear-filled stories of maimed, crippled and murdered teenagers and infants than they do, but usually refrain from  exploiting in the media pictures of suffering and bereaved Israeli parents and relatives.

Had the Arabs, who call themselves Palestinians, at any time over the past seven decades accepted peace they could have lived comfortably side by side with tiny Israel. Instead, they have chosen rejection and war.

Meanwhile, as untold thousands of fellow Christians in Syria, Egypt, Iraq, Gaza, the Palestinian Authority and throughout so much of the Arab world are slaughtered and fleeing, the clerics at St. James church in Piccadilly, London remain deafeningly silent in the face of this Islamic anti-Christian persecution. Instead they vent their loathsome bigotry against the one and only nation protecting Christians in the Middle East: Israel.

Victor Sharpe is a prolific freelance writer and author of several published books including the trilogy, Politicide: The attempted murder of the Jewish state.