PM: In peace deal, no settlements will be evacuated 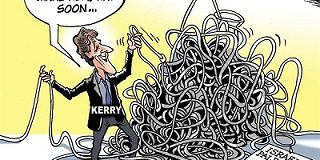 In a Likud faction meeting on Monday following the departure of U.S. Secretary of State John Kerry from the region, Prime Minister Benjamin Netanyahu fielded questions about the peace process from MKs and assured them that “there will be no evacuation of settlements.”

While a framework agreement had not yet been reached, Netanyahu said, there had been progress, including the U.S. adopting the Israeli stance on some issues.

Netanyahu told Likud MKs that “in the emerging document, there are things you and I don’t like, but there are also things the Palestinians don’t like. In the best case, there will be a cold peace, as with Jordan, and in the worst case, Afghanistan.”

In an effort to calm both expectations and fears, Netanyahu said, “There is still no document and the Americans are not succeeding at obtaining agreements between the sides.”

“The Americans presented their stances and I am trying to bring reality into the plan,” Netanyahu said. “In our entire region, from Morocco in the west to Pakistan in the east, there is no country that is not undergoing turbulence other than Israel, and that teaches us that you cannot base policy on illusions. Every policy based on illusions eventually bursts reality. … I will not support a binational state. A settlement freeze during negotiations is not on the agenda. The talks are not about dismantling settlements and I have no intention of evacuating any settlements in Judea and Samaria.”

MK Moshe Feiglin (Likud) asked what was on the agenda during negotiations, to which Netanyahu responded, “There are many empty areas that are unsettled,” in a possible hint at land swaps.

“I do not intend to give up any settlement blocs or symbols of , for example, Hebron,” the prime minister said, adding that Israel is seeking to extend negotiations by a year.

Finance Minister Yair Lapid said in a Yesh Atid faction meeting on Monday, “As someone who is familiar with the progress of the diplomatic process, this is real. There is a true opportunity here, closer than it appears, to reach an agreement. We cannot miss it. … I want to bolster the prime minister and to call on him to make every effort to realize this opportunity.”

Defense Minister Moshe Ya’alon said on Tuesday that efforts were being made to extend the nine-month window allocated for the talks that began in July.

“There are large gaps,” Ya’alon said. “They are not new, but it is definitely in the interest of all of us to continue the negotiations. We must continue to work to stabilize the relationship between us and the Palestinians.”

A senior Palestinian official close to Palestinian Authority President Mahmoud Abbas expressed pessimism on Monday, saying, “The gaps have widened further, and Secretary of State Kerry is having difficulties bridging these gaps. … Abu Mazen made clear to Kerry that the Palestinians will not agree to the current framework.”

The Palestinians have serious reservations about some of Kerry’s ideas, particularly on the future of Jerusalem, a Palestinian official said Monday, speaking on condition of anonymity because of Kerry’s demand for discretion.

Kerry suggested in meetings with Abbas over the weekend that a framework refer to Palestinian “aspirations” to have a capital in Jerusalem, the official said. The Palestinians want a specific mention of east Jerusalem as their capital, fearing that otherwise they will end up with a small part of the city. Netanyahu has said he opposes any division of the city.

Kerry has not discussed the substance of the negotiations in public.

However, participants in the talks have said Kerry wants Abbas to recognize Israel as the homeland of the Jewish people — a demand Abbas has rebuffed in the past. In return, Netanyahu would likely have to accept the pre-1967 lines as the starting point for drawing a border between Israel and a future Palestinian state.

During his visit to Israel, Kerry also met with Opposition Leader Isaac Herzog (Labor). After the meeting on Monday morning, Herzog said, “Kerry seems more determined than ever in the past to reach a deal, and despite the gaps, he believes there is a chance to reach an agreement.” Herzog also told Kerry that the Labor party would support a peace initiative.

Next week, Kerry is to meet in Paris with an Arab delegation that monitors the Israeli-Palestinian negotiations, according to Nabil Elaraby, the secretary-general of the Arab League.

It is not clear when Kerry will return to present his proposed framework to the Israeli and Palestinian leaders.

Maj. Guy Inbar, an Israeli defense official, said the initial approval for new building in the communities of Ofra and Karnei Shomron was given several months ago.

“What we’re seeing today is the implementation of a decision from October,” said an official from the Prime Minister’s Office. The official was referring to formal publication of the home-building plan. The public will now have 60 days to voice any opposition before the plan moves forward.

A Defense Ministry official said the plans for 272 more homes in the Ofra and Karnei Shomron communities were preliminary and must pass a few more stages of authorization before construction would begin.

Olmert held intensive talks peace with Abbas in 2007 and 2008, before Olmert left office as a result of a corruption probe.

Olmert did not mention Netanyahu’s name and said he was making general comments that should not be construed as a personal attack.

“If we make a peace deal with the Palestinians, the benefit the State of Israel will receive will be greater than from anything else we will ever achieve,” he said.